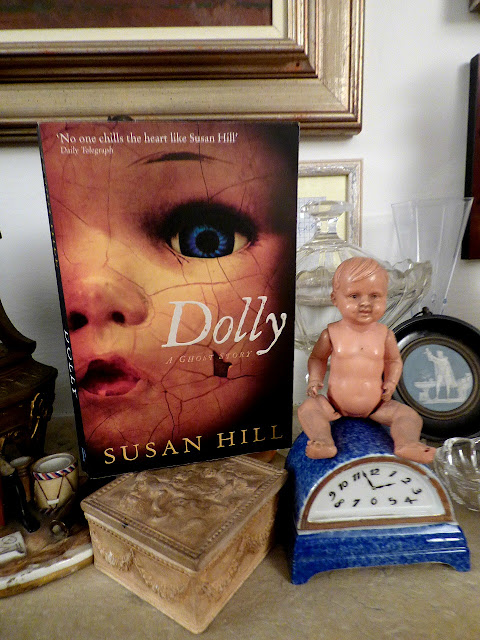 We stayed for a week in Italy over Easter. My in-laws don't have a wi-fi, and we usually pay for the wi-fi in the local Vodafone shop. It is a pure racket, if you ask me. 20 euros didn't last even a day. We added more money the next day, but had to limit our Internet use. I did take a few paperbacks with me on a trip and read all of them.
Dolly by Susan Hill was given to me by a friend, she thought I might find it entertaining (she loves a good old ghost story, and though I'm not the biggest fan of the genre, I do enjoy it at times).
I read it in one day, as it is a short novel (and probably would have benefited from being edited to even a shorter version as a novella or story).
It was atmospheric enough. An 8-year-old orphan Edward Cayley goes to stay with his elderly childless aunt Kestrel in a remote house in the fens. The Iyot House and its inhabitants are not experts on children. The housekeeper in particular hates children. The elderly aunt might be mildly friendly, but totally clueless as to what children might want or need. To keep Edward company, Aunt Kestrel invites another child to stay with them. Thus a wild and spiteful selfish brat of a girl called Leonora appears on the scene.
She is a complete opposite of her quiet harmless cousin.
Together they explore the house and the outdoors, venturing into the graveyard and the church. They also play Bagatelle.
Leonora's mother is another spoilt and ruthless female, who moves from one lover to another and travels around the world, buying pointless gifts to her daughter who craves her love and attention.
It looks like all Leonora wants is an Indian Princess doll, but her mother never buys it for her. To her that dream doll is a symbol of mother's love which she never gets.
To treat Leonora, Aunt Kestrel travels to London and brings a doll with it. Alas, it's not the doll that the angry unloved girl wants. In a fit of rage she throws the doll against the fireplace. The doll's head is cracked, and all the hell breaks loose.
This book is a perfect holiday fodder, but not the best work by Susan Hill. The end is rather unsatisfactory, and there are so many questions that are left unanswered.
The beginning of the story, with its creepy eerie setting looks promising, but the end is disappointing. I don't like to be left guessing as to why the events happened the way they did and how.

Spoiler alert - below the next photo I will be talking about the questions that I would like to ask those people who have read the book, and might shed the light. If you haven't read the book, don't read further. 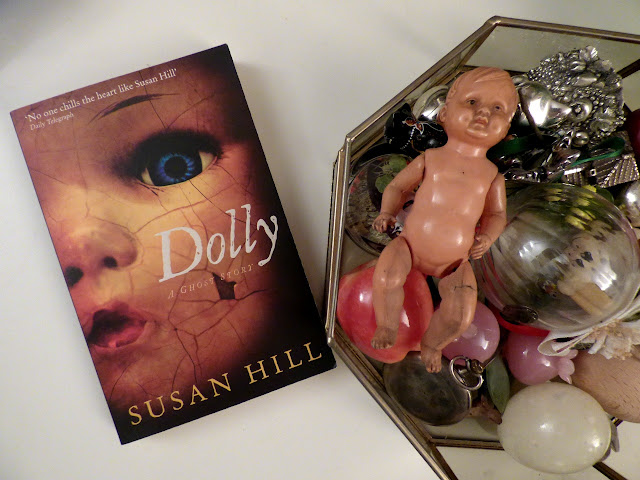 Where do I start? I have so many questions.
Why did Aunt Kestrel bequest the ruined doll to her niece, and where did she think it has been all those years, since she didn't know it was buried?
One doll is cursed, so why is the other happens to be cursed as well? The first one was avenging the wrongs, but the second one was kept perfectly well, why did she inflict her "disease" on an innocent victim? It's like a curse been passed from one doll to another similar to a baton during a race.
What did Leonora see in the pond and in the church plate as her reflection? Was the evil "germinating" in her already?
How come the restorer have that same doll in his shop, which Leonora wanted many years ago? Did he know he sells a cursed doll?
Do tell me what you thought of this book, if you've read it.
Posted by Galina Varese at 18:42:00