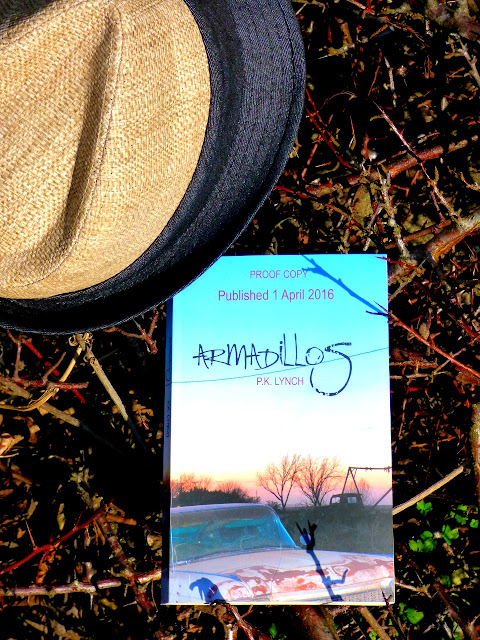 "Guess there's some things you can't run away from. Some things sit inside and all the time you're trying to run away, you're carrying them yourself. You're hiding them that bit deeper inside yourself. Your head plays tricks. Your body plays tricks. People had been slowly killing me for a long time and getting away with it. Maybe it was time I got away with it, too".

Armadillos is P.K.Lynch's debut novel, set in modern days Texas. It is a first-person narrative. The story is told by Aggie, who has endured years of abuse in her family. As her older sister Jojo dryly explained to her they were "subs" and hence had to accept the incestuous relationship uncomplaining.
Somewhere deep in her mind she knows this is wrong, and when she turns 15, Aggie runs away.
She's just like the eponymous armadillos of the title, a survivor in the harsh circumstances.
Trying to erase the memories of her past, Aggie puts as much distance as possible from her horrid family, but she can never escape her past. She hitches rides across the state with truck drivers whom she basically swindles money from by threatening to accuse them of abduction and rape.
She ends up in a squat in Dallas, where she lives among the similarly damaged characters, all with a story of their own to tell and their own demons.
Her new family is as disturbed and dysfunctional. Her best buddy Freak is into self-harm, and the scenes of mutual mutilation were rather graphic.
The book is a disturbing read. It was a fascinating book, but alas, I couldn't warm up to Aggie.
Yes, she is a victim and a survivor, but she is also quite unpleasant as a person.
She is a Becky Sharp of our times, trying to survive on her own, depending on her wits. Life has left her embittered and vily.
Aggie cannot achieve closure, but I do hope she could change her life for better.
The "resurrected" armadillo which was about to be buried by Aggie's friend Marjorie is a symbol - you might be "squashed" by heavy trucks and pronounced dead, but you spring back to life.
"We watched in awe, both of us with jaws trailing the ground, neither of us doubting we were witness to a miracle. He began to wiggle away from us, his long nose on the hunt for food...
"Look at the little guy. He's a born survivor".
This is an impressive debut novel, thought-provoking and compelling.

Disclosure: I received a proof copy of the book for the purposes of reviewing.