- Eddie, do you know that they celebrate Christmas in Russia today? This is the day when Jesus was born.
- But Mummy, we saw him in Italy!

Today is the day when the Russian Orthodox Church is celebrating Christmas. Don't ask me to explain the intricacies of the Julian Calendar. When I tried to explain it to my younger son, he was left unconvinced, especially that we spent Christmas in Italy with his grandparents and he went to the service, and saw a figure of baby Jesus in the crib.

When I grew up, Soviet Union was pretty much an atheist country and the religion was dismissed as the opium of the people. My family didn't celebrate Christmas, when I was a child. Yet some of our friends did, and that's when I first tried some of the traditional Russian Christmas dishes.
Russian Christmas is a strictly vegetarian event in the religious families. In fact, it should be dairy-free as well.
Traditionally there are 12 dishes on the table to represent the twelve apostles. There would be a kut'ya (sweet dish made of wheat or rice with honey and dried fruit and nuts), a soup - either made with dried mushrooms or sauerkraut, uzvar - a compote made with dried fruit, lots of pickles, vegetables and appetizers. Some families serve a big fish, or cook a fish pie kulebyaka.

I didn't plan to serve 12 dishes for Christmas eve meal, but fancied a mushroom soup. I used some porcini mushrooms I bought in Italy, but they are the same type that would be used in Russia as well.
You can cook it with fresh mushrooms, but the dried variety would be more authentic.
The Russians love mushroom-picking, and the best ceps or porcini are often sliced and dried, and they keep very well. 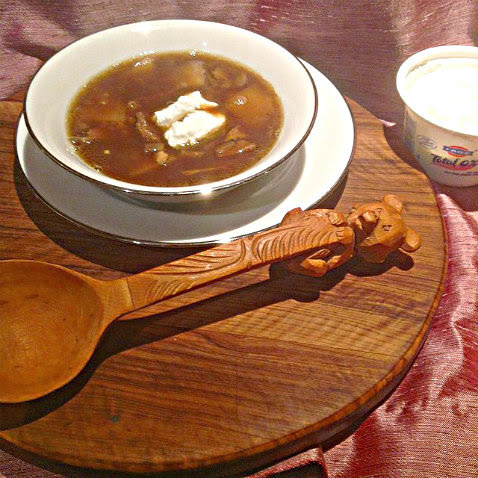 Break or cut the slices of porcini mushrooms into smaller pieces. 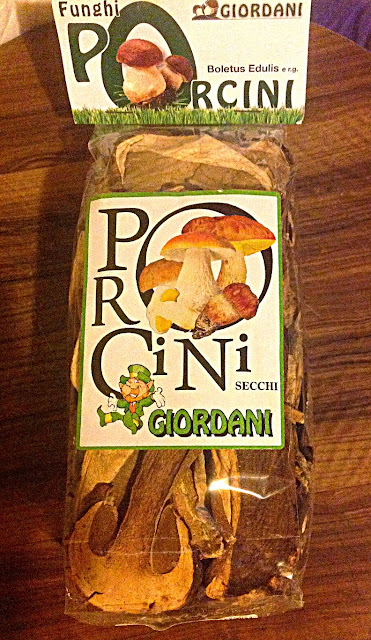 Place them in a pan, pour hot boiling water over them (about 1litre). Let them soak for half an hour. You'll get very dark liquid, this will be the stock for soup.
Finely chop half an onion and a clove of garlic, fry them with the olive oil until the onion gets translucent. Add a dash of brandy if you fancy. Remove the mushrooms from the pan with a slotted spoon and place them in the frying pan, fry for about 5 minutes, stirring.
Put the mushrooms and onion mix back in the pan with stock, bring to the boil, add the lentils and chopped potato, cook for a few minutes on boiling, then reduce the heat and simmer for 30 minutes.
Season with sea salt.
Serve hot, with a good spoonful of soured cream or Greek style yogurt, but this is optional. 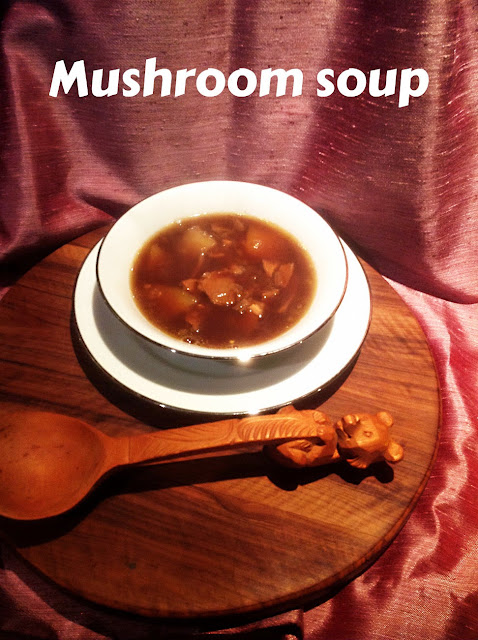 This is a very tasty soup, which is even better the next day.