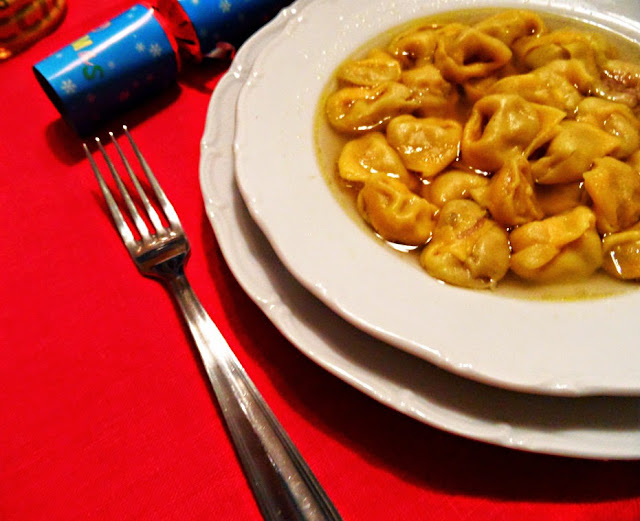 Have you ever wondered what the Italians eat for Christmas? There is no universal menu throughout the country, as of course the Italian cuisine is very regional. And even in one region there might be differences in what is cooked and how. A few years ago when Taste Italia run an article on the food of Emilia Romagna, and featured Ferrara, I read it and asked my husband "How come I never tried any eel dishes in Ferrara? This article says it is a typical dish in your town". He was quite aghast and said that the eels are eaten in Comacchio, which is the southern part of the province. And being a townie, he obviously doesn't eat it. 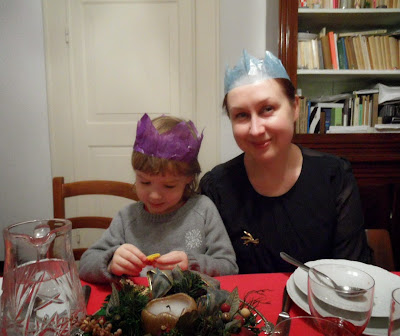 As you know, we spent the last Christmas in Ferrara, and my mother-in-law was preparing our Christmas meal. I asked her if she wouldn't mind me taking some photos during the lunch. 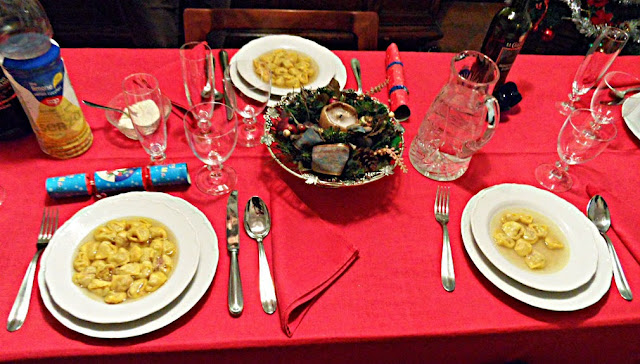 So, the typical Ferrarese Christmas lunch is quite set. There are a few deviations, but you can bet that the first course would be Pasta in brodo, either meat-filled tortellini or cappelletti.
The brodo or broth is cooked for several hours the day before. It is a whole ceremony. At certain intervals different cuts of different meats are added to the broth, with vegetables and herbs. It is simmering for hours on the stove, and the aroma is simply fantastic.
I remember when my husband's Nonna was still aive, she was in charge of cooking the broth.
The Ferrarese appreciate the intricacies of making the proper broth for Christmas, none of that shop-bought nonsense, or heaven forbid, a broth from a stock cube or powder (they use the stock cubes, of course, but for casual meals).
While my mother-in-law doesn't make her own pasta, she buys it from the small local shops which sell homemade pasta of all sorts.

The meat from the broth is later served with the other meat dishes. The cold cuts are very tasty with the Italian mostarda di frutta, which could be either whole candied pieces of fruit in transparent mustard syrup, or a jam-style variety of fruit puree mixed with mustard.
This year we tried a fig mostarda, and it was delicious. The platter with cold cuts also had a dish of rolled chicken meat stuffed with chard. 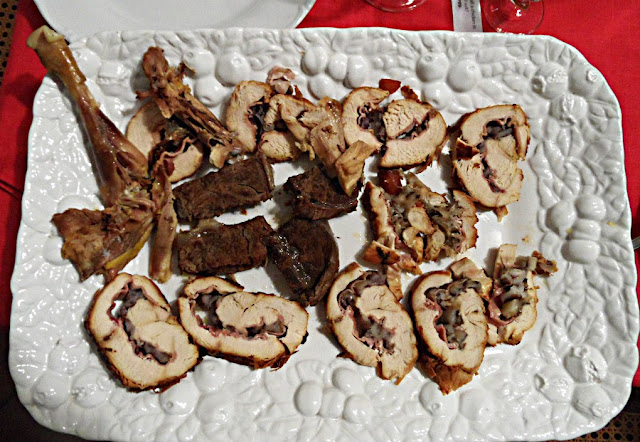 Most Ferrarese (those who are meat-eaters) would also serve a salama da sugo. This pork sausage is the speciality of Ferrara. Its recipe goes back to the Renaissance times, when Ferrara was a mighty dukedom, ruled by the House of Este. It is made with a mix of pork neck and pancetta, lard, liver and tongue, all ground and seasoned with salt, pepper, red wine and spices (cloves and cinnamon). The meat of the olden days was heavily spiced to keep the whiff away. Then the mix is stuffed inside the pork casing and left to age for up to nine months.
And again, I remember how my husband's Nonna would cook it the traditional way, i.e. on a contraption of wooden spoons over a pot of boiling water. The sausage should not touch the water, and is cooked by the steam.
This spicy, strongly-flavoured meat is served with the mashed potatoes.
Being married to a Ferrarese, I had a chance to try this local delicacy quite a few times. Let me tell you, it is an acquired taste, and has been wasted on me. I can only manage a teeny-weeny piece. You probably need to learn to love it with the milk of your mother. 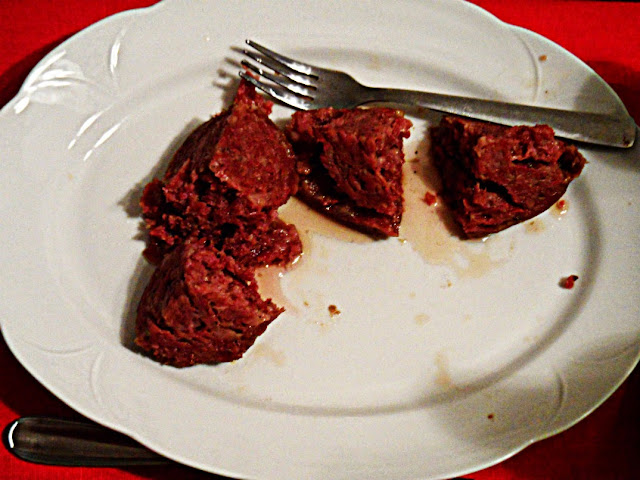 It is also often eaten with mashed pumpkins and coppia, the bread from Ferrara.

Another dish often served at Christmas and new year's eve is a plate of lentils, as it is supposed to bring good luck and money. 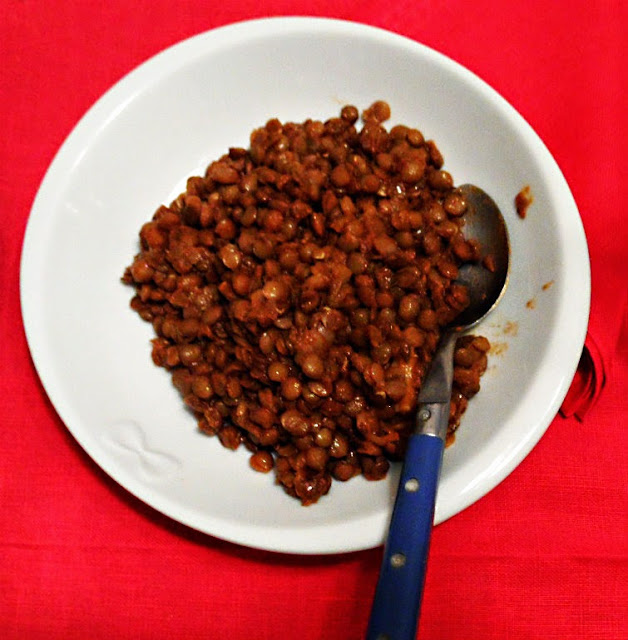 There were more side dishes of vegetables and greens, like rocket leaves.
The whole dish couldn't be further away from the British turkey/ham/beef with roast potatoes, carrots, brussels sprouts etc etc. 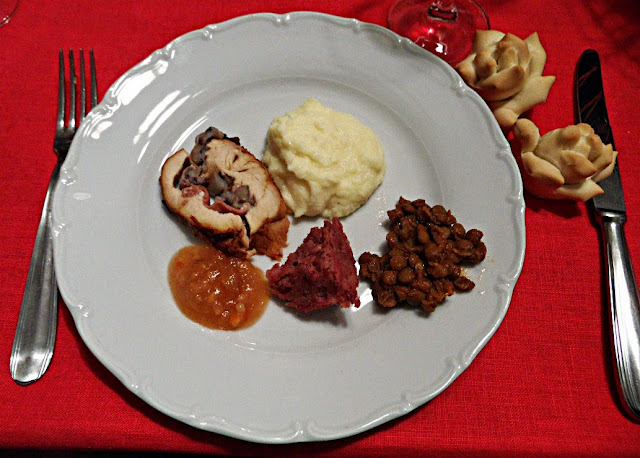 We finished the meal with a chocolate cake tenerina. This rich, decadent cake is made from dark chocolate. It has only a tiny amount of flour. The centre is very soft and moist. This is a delightful cake.


There was also a choice of a panettone and a pandoro, and a selection of fresh fruit and nuts. 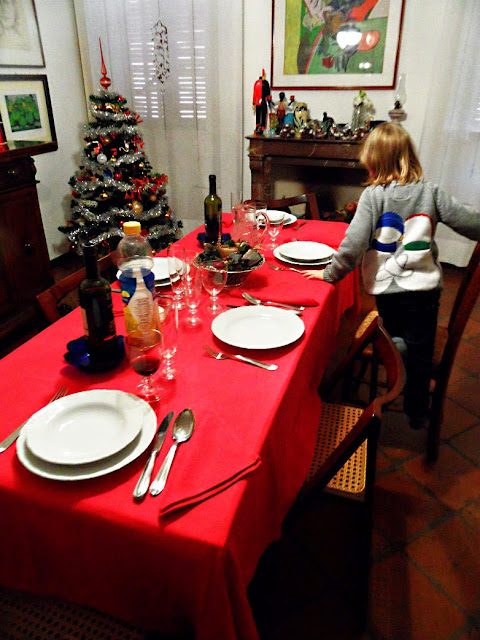 Our only contribution to the Christmas lunch was a box of crackers which on Eddie's request we brought with us from the UK. Eddie was the only one who appreciated the jokes inside the crackers. 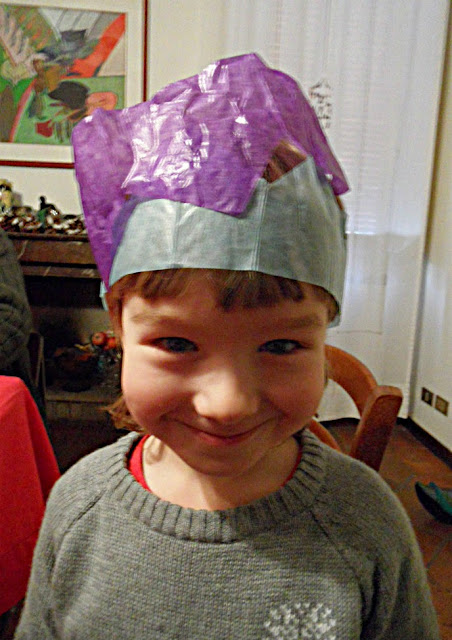 If you've done posts about your Christmas meals, whether you cooked it yourself or like me, were a guest, please share with me. I'd be delighted to read what you had for Christmas lunch/dinner.
This is a one-off linky which will end on 31 January 2015. There is no badge and no request to link back to me, I'm just curious to read what you enjoyed for Christmas.