You can always rely on Schwartz spices and herbs, and I have at least a dozen of different bottles of Schwartz spices in my kitchen. This brand is well known and popular, but it never rests on its laurels and keeps adding new flavours to their wide range. Recently Schwartz has extended its innovative Flavour Shots range with three new varieties, suitable for quick and easy midweek family meals. Three new flavours include an Italian Creamy Herb Tagliatelle, Spanish Paella and Indian Spicy Jalfrezy Curry.
If you have bought Flavour Shots, you know that they are little pots with a blend of herbs and spices in sunflower oil. These pots come with a list of products to buy to recreate the recipe printed inside the sleeve. They are very easy to use and are a great little helper in the kitchen for the evenings when all you want is to prepare a quick easy and tasty meal for your family, without much fuss and not too many ingredients.


Italian Creamy herb Tagliatelle Flavour Shot is a blend of herbs, spices and seasonings infused in sunflower oil. Among its ingredients you will find basil, pepper, oregano, basil, parsley and rosemary. The pasta dish was colourful and aromatic, if a bit too salty to my palate. 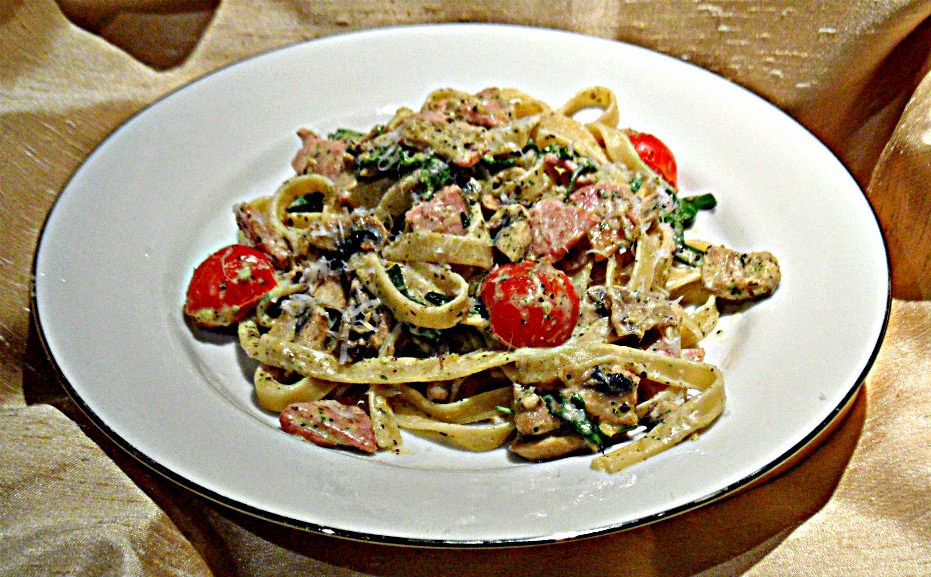 Stir the contents of the flavour shot very well, then spoon into a frying pan with the sliced mushrooms, fry them for about 4 minutes until softened. Add the tomatoes and fry for another minute. The recipe suggests adding the bacon at this stage (I have started with the pancetta, and cooked the mushrooms with it together). Add the cooked and drained tagliatelle, rocket, creme fraiche, stir through. Serve immediately. Lovely with the grated parmesan on top (but that's optional). 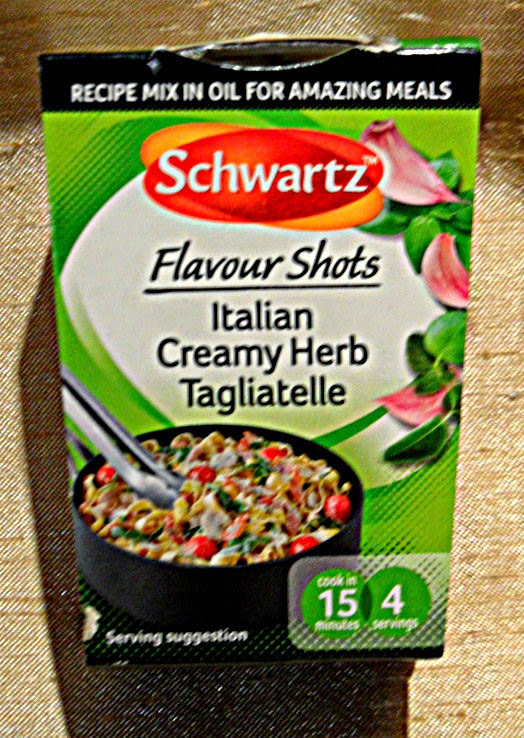 While basil and oregano are common Italian herbs used for cooking pasta, rosemary is less so. Rosemary is one of the herbs that I don't like dried, there is something too rough and almost compost-like in the dried rosemary. It is OK for sprinkling over the roast potatoes if you don't have any fresh rosemary, but there is no comparison. If I were to advise the Schwartz panel, I would remove the dried rosemary from this recipe altogether. 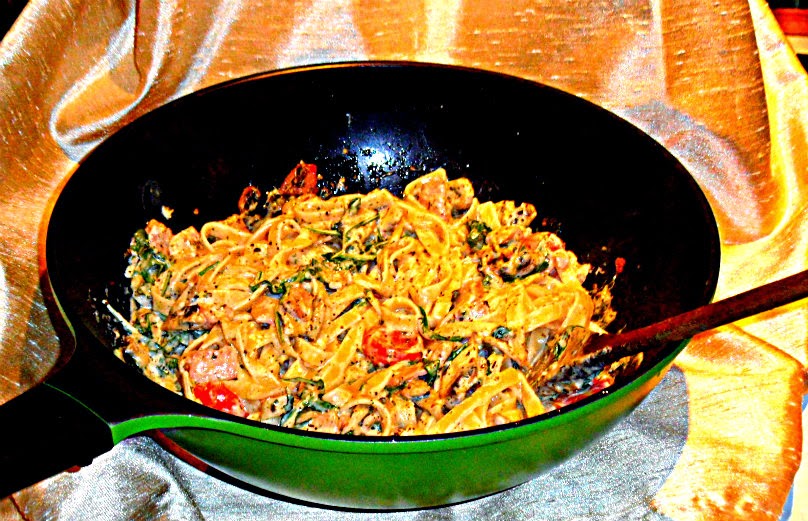 Indian Spicy Jalfrezi Curry Flavour shot is a blend of spices (cumin, dried garlic, fenugreek, coriander, ginger, cinnamon, black onion seed, chillies, cloves and more) and seasonings infused in sunflower oil. It was a tasty aromatic curry, a bit on the spicy side for me, but then I usually prefer mild curries. I will look for their Indian Mild Masala Curry next time I do my grocery shopping.
Yet if you like your tastebuds tingling, this might be the right flavour shot for you.

You will need
1 Schwartz Spicy Jalfrezi Flavour Shot
2 onions, finely chopped
2tsp tomato puree
400g tin chopped tomatoes
450g chicken breasts, sliced (I used the chicken thighs)
1 red pepper, sliced
1 green onion, sliced
Stir the contents of the shot very well, then spoon into a large frying pan over a medium heat. Gently fry the onions for about 10 minutes until golden brown. Stir in the tomato puree, tinned tomatoes, chicken, peppers and water. Bring to boil then simmer for ten minutes until the chicken is cooked through. As I cooked the chicken thighs, I first browned them in the olive oil, then removed after 10 minutes and started with the onions in the same an with the chicken juices. Then simmered them in the tomato sauce until cooked well.
Serve with basmati rice.

Spanish Paella Flavour Shot was my favourite dish of the three flavour shots that I have tried. It's a blend of sunflower oil, dried onion, smoked paprika, garlic, turmeric, parsley, pepper and more. It was packed with flavour and had just the right amount of spices for me. A lovely combination of rice, meat and vegetables, it was very tasty and I will be definitely buying this flavour shot for a quick and easy dinner. Top marks for convenience and authentic taste. 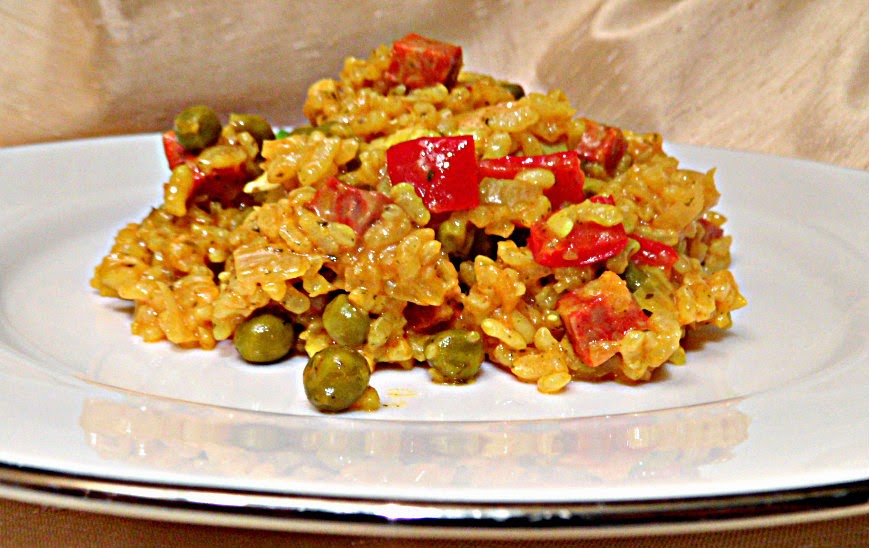 I have slightly adapted the Schwartz recipe on the carton and reduced the quantities of meat, chorizo and paella rice, and that was well enough for 4 big portions. I also used the diced turkey rather than chicken, and added some rose wine.

Stir the contents of the Flavour shot really well, as it tends to separate. Pour it over the finely chopped onion in the frying pan with the olive oil. Fry gently for about 5 minutes, add the chicken or turkey and chorizo, fry for further 2-3 minutes. Add the paella rice, stir well and fry for a minute. Add the water, wine, pepper and half of the water. Stir well. Keep adding wine and water, a bit at a time, simmer the paella for about 20-25 minutes until the chicken and rice are cooked, stirring occasionally. Add the tinned peas at the last minute. 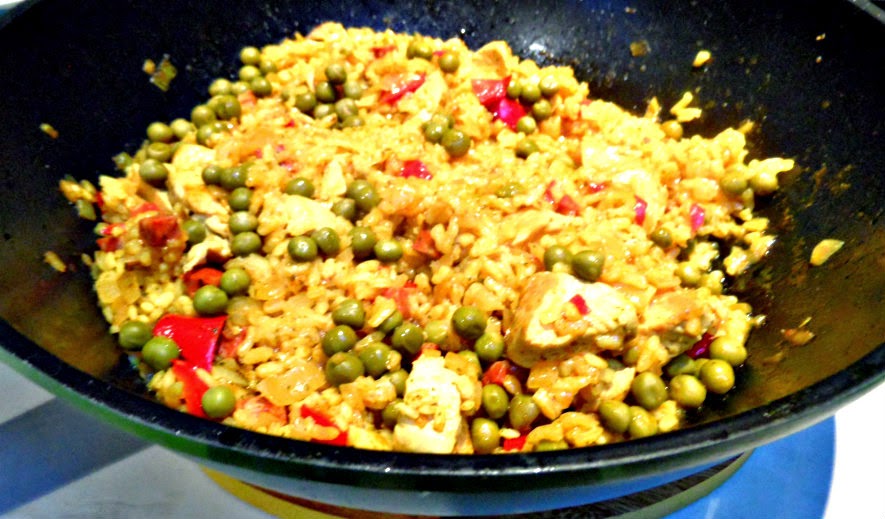 Typically I would cook the paella with chicken and prawns (this recipe didn't include the prawns).

Schwartz also suggests cooking a seafood paella and replacing the chicken with prawns. 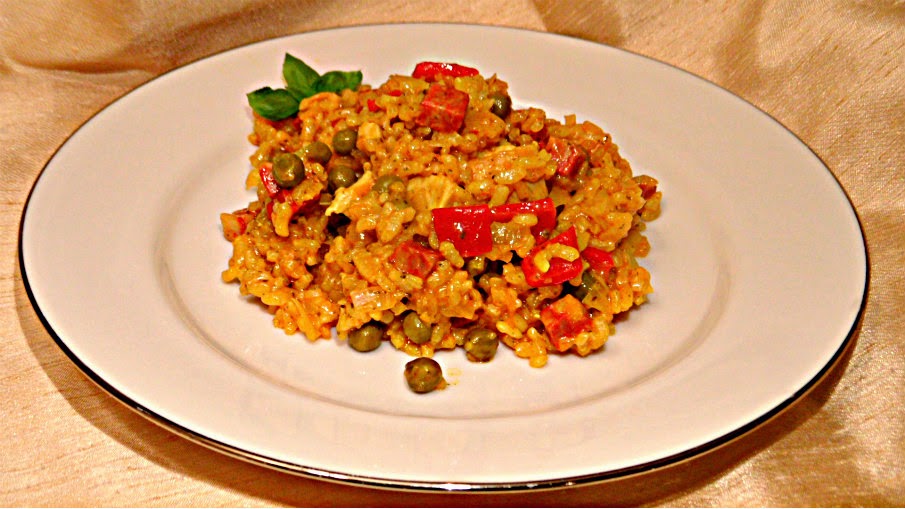 
Disclosure: I received a selection of three Flavour Shots for the purposes of testing and reviewing. All opinions are mine.
Posted by Galina Varese at 19:40:00