"Meatballs!" the professor exclaimed, indignant. "Meatballs are for dogs!"
The inspector kept his cool. The aroma floating up from the dish and into his nose was rich and dense... Pintacuda chewed slowly, eyes half closed, and emitted a sort of moan.
"If one ate something like this at death's door, he'd be happy even to go to hell", he said softly.
The inspector put half a meatball in his mouth, and with his tongue and palate began a scientific analysis that would have put Jacomuzzi to shame. so: fish and, no question, onion, hot pepper, whisked eggs, salt, pepper, breadcrumbs. But two other flavours, hiding under the taste of the butter used in the frying, hadn't yet answered the call. At the second mouthful, he recognised what had escaped him in the first: cumin and coriander (Andrea Camilleri, The Snack Thief)

I love Inspector Montalbano books and movies (Luca Zingaretti is totally sex on legs). One of the major attractions of the series is the description and references to numerous local dishes. I fancied cooking some tuna meatballs after reading The Snack Thief, and looked online for inspiration.
I liked the sound of Jamie Oliver's polpette di tonno, and used it as a base but have changed the quantities, added some new ingredients and changed the way of cooking the meatballs, as I baked them rather than fried. 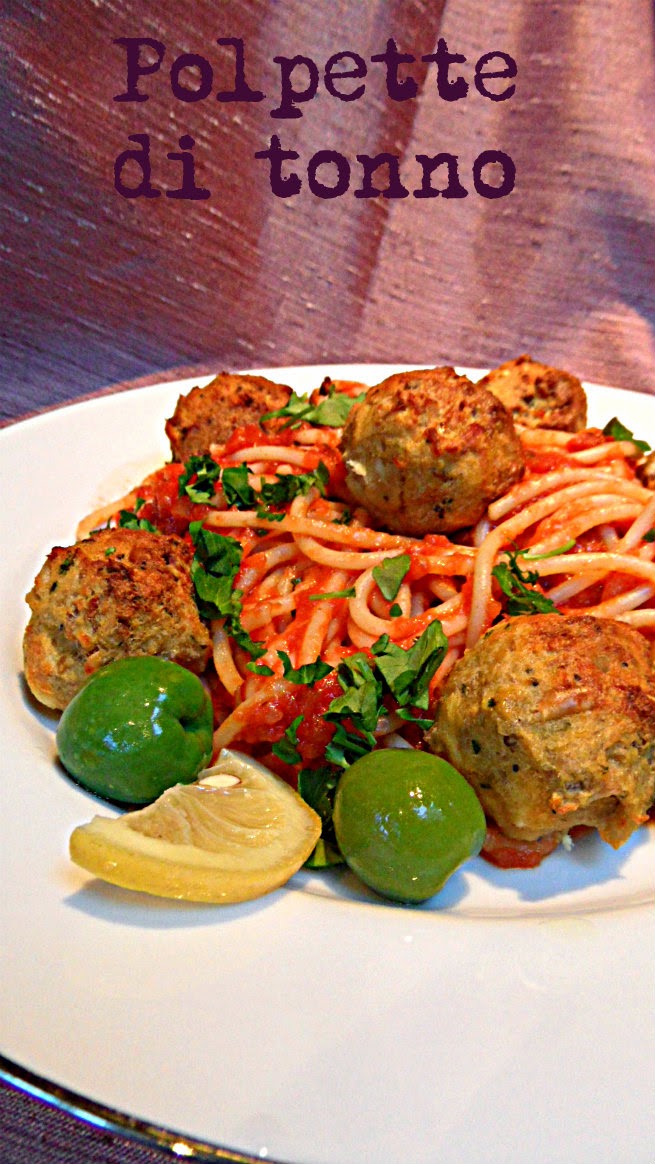 Finely chop the shallots and garlic and fry them in the olive oil for about 8 minutes, stirring occasionally, until caramelised. Season with sea salt and sugar. Open the tins of tomatoes and add to the pan with the onion mix. Add the vinegar, herbs, both dried and fresh, bring to the boil, then simmer on low for half an hour. Set aside, once cooler, blend it until smoother consistency.

For the tuna meatballs, slice the steaks into strips of 2cm thickness, and pan fry with the olive oil and pine nuts for about 5 minutes. Let it cool slightly before dividing in half. Whizz half of the tuna and nuts mix with the eggs and herbs, using a blender, until you get a smooth paste. Break the other half of tuna strips with a fork, add to the paste, and mix well with a fork (don't use the blender anymore). Toast four slices of bread for a couple of minutes, then cube the toasted bread into big size crumbs and add to the fish mix. Mix together.
Make the polpette, rolling the fish mix with your hands. To make it easier, place a small bowl of cold water next to the bowl with the tuna mix, and dip your hands in the water in between making the meatballs.
Take a ceramic tray or big dish, and add a bit of olive oil. Place the meatballs on the tray and bake in the oven preheated to 180C for about 20 minutes or more until golden brown. 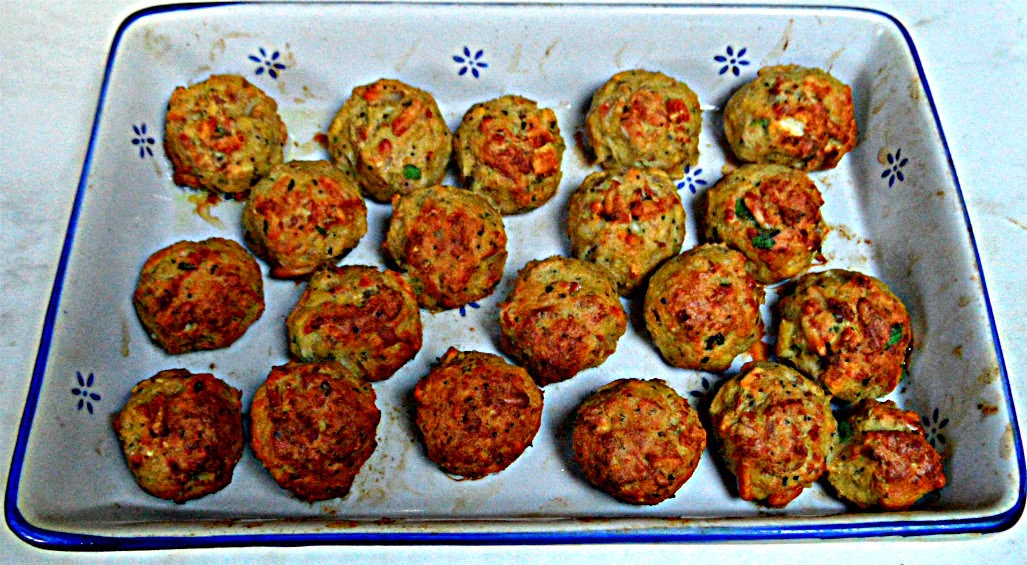 In the meantime, cook spaghetti in the boiling salted water until they're al dente. Add half of the tomato sauce to the pasta and serve with the tuna meatballs and some fresh chopped parsley.
Keep the other half of the sauce in a container with a lid in the fridge for a couple of days, or freeze. 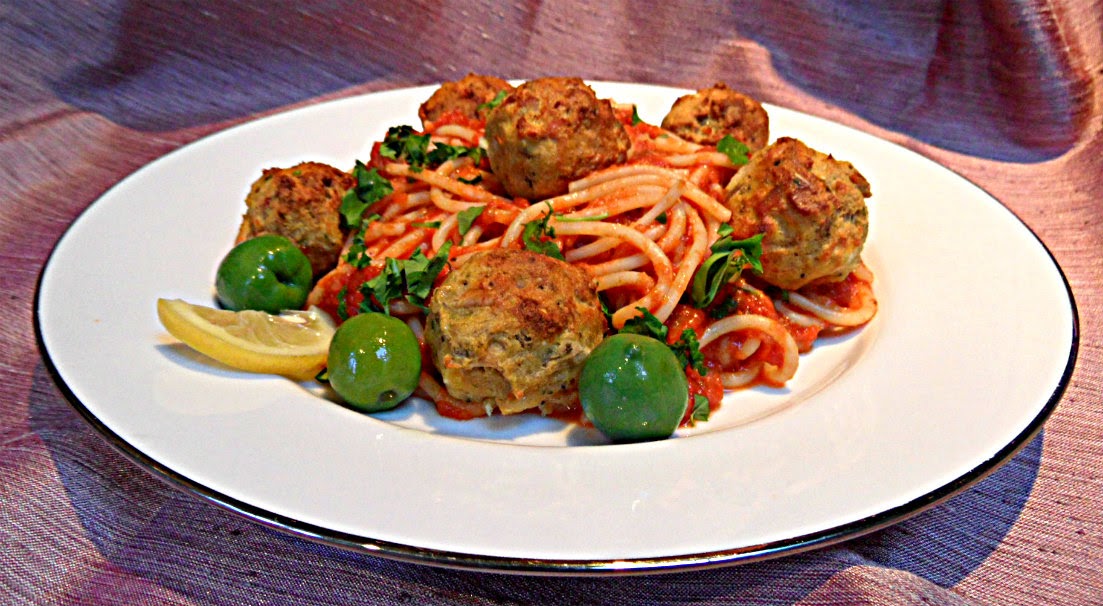 This is not a budget recipe, as fresh tuna could be quite pricey, but it is delicious and flavourful. Hope Inspector Montalbano would have enjoyed it. 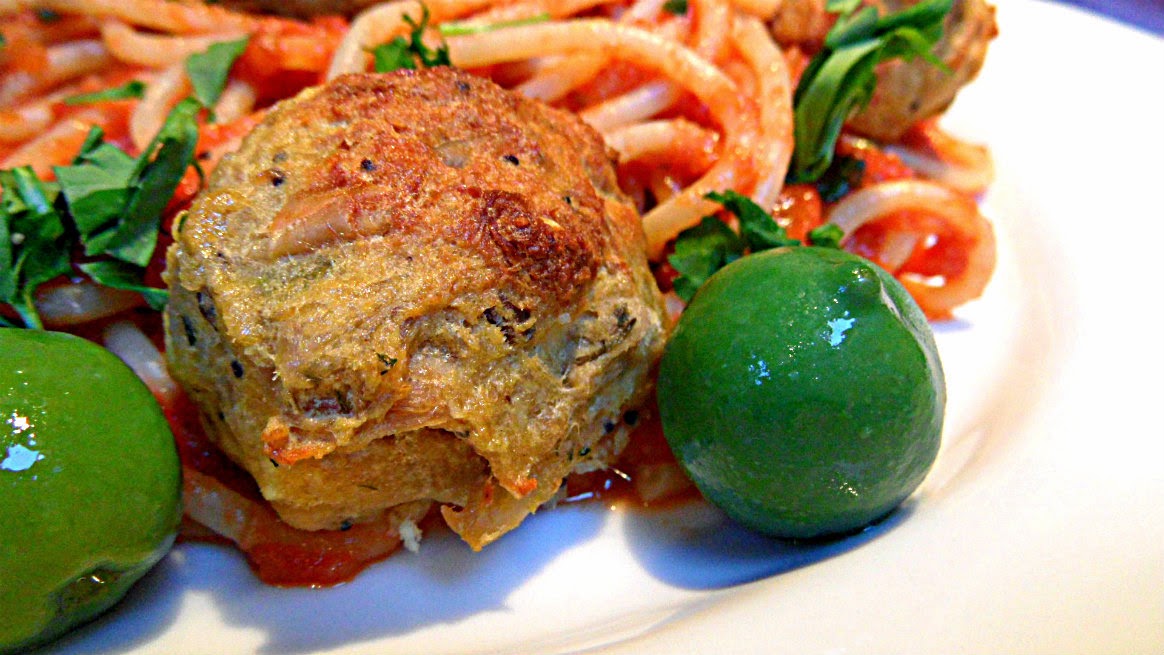 This is my second recipe for #ReadCookEat challenge which both Chris from Cooking Round the World and I host this month. 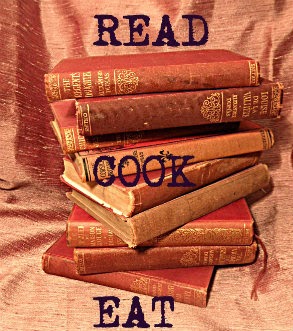