If you visited Ferrara, Italy, in the last couple of weeks, you wouldn't fail to notice an amazing exhibition project spread through the town - Saint George, the Dragon and the Princess. Twenty five Italian artists and ten artists from abroad were invited to reinvent the tale of St George slaying the dragon. This splendid parade of sculptures appeared in the historical squares and museums of Ferrara.
As the page dedicated to the project explains "St George... became protector of hundreds of cities and nations for his exploits... St George, the warrior Saint, was not only known and worshipped in Europe but, due to his origins in the Cappadocia, is considered the prophet of those far Muslim lands. St George is an important figure connected with Christianity and the Islamic culture, moreover he is the symbol of the struggle of the human beings against hostile elements and the titanic fight to save the defenceless... the Dragon (is) the symbol of the nature, severe plagues, earthquakes... the Princess (is) the symbol of the population, the helpless and the weak..."
St George is also the protector of the city of Ferrara. 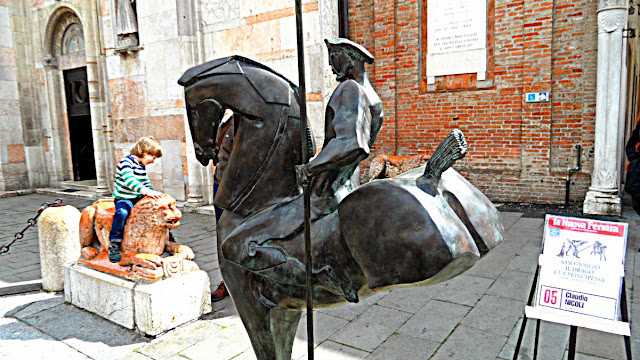 We were on the way to our favourite cafe Leon 'Oro, when I stopped in my tracks. There it was, an unexpected modern sculpture of St George, right next to the cathedral.
It is the most unusual interpretation. Both the saint and his horse are missing limbs, but stand proudly and defiantly. Claudio Nicoli's work stands gracefully amidst the multi-coloured throng, a mix of tourists and locals. As there was nobody to ask, I thought of it as a testament and homage to people with disabilities, whose lives are challenging.

On the other side of the cathedral, Francesco Bombardi's mystic creature, half-human, half-chrysalis mournfully floats above the pebbled square. I would have dearly loved to ask the sculptor how he interpreted his own piece. There is quite a lot of general information on the project online, but I couldn't find any interviews where the artists talk about their ideas. 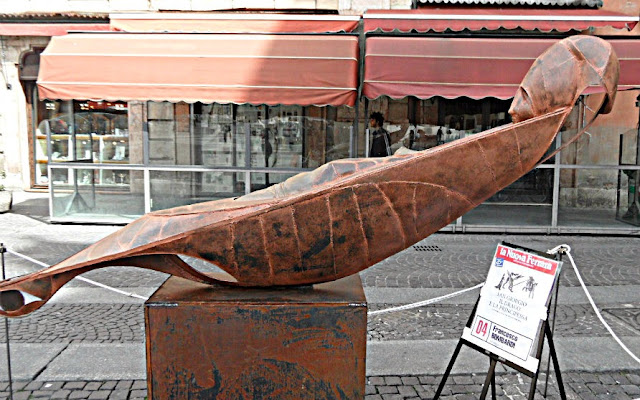 This melancholic princess made me think of the Lady of the lake. My mother-in-law thought she was a dragon. But of course, that's the pleasure of the art for the people, you can have so many opinions. Is she a princess being consumed by the dragon? Are the dragon and the princess merged together?

Further along, by the castle, there is an amusing ironic trio by Marcello Magoni. While St George is valiantly fighting the dragon, the Princess is totally absorbed in her mobile. Perhaps she is taking selfies, or is posting updates on Facebook?

A few metres away, there are two more exhibits. One is a beautiful set of blocks by Paola Grizi. The top block has a carved eye, which might allude to Botticelli's Venus. As you can see, it is not a big piece, as my son Eddie demonstrates. He loved running around the modern art works. They are in harmony with the old squares and parks.


The next art piece is by Carlo Zoli. It is a splash of colour. The elegant black dragon is pierced by a spear, the faces above him are mournful, solemn and blood-splattered.

I got really excited and wanted to see all the works in the project. It was a bit like an Easter egg hunt. In the end we didn't quite manage to see all of them, as some were still in progress, some were a bit out of the way. Some were monumental, some fitted on a small table.

Paola Paganelli placed her unconventional group in Palazzo Schifanoia's courtyard. It is a big leafy green space. My boys were happy to run around, on the carpet of pretty little daisies. The princess and the dragon as powers of nature looked like mystic wicker baskets, while St George appeared as a construction set of big rusty shapes.


Giovanni Andriollo has truthfully followed the classic traditions of the old masters. His St George is skilfully carved, dark, solemn, and wouldn't look amiss in any church. 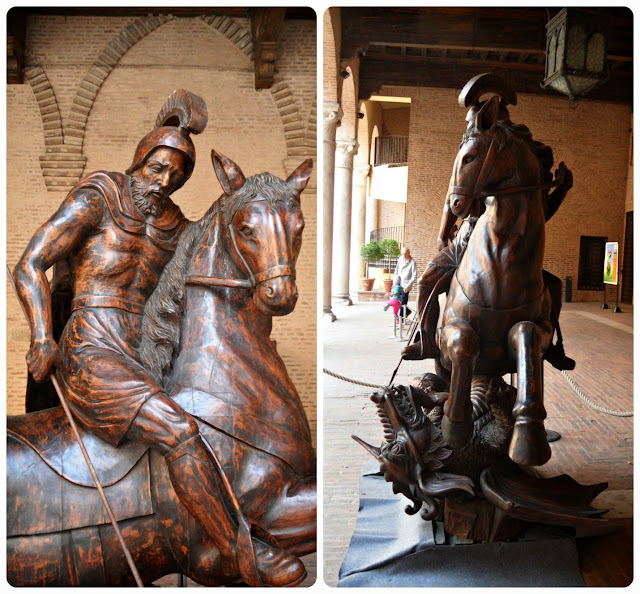 While Andriollo's art followed the classic art, Mario Storno has also ventured into the domain of the art history.
His composition reminded me of the sacred wooden sculptures of my motherland, the celebrated Perm Gods, a collection of unique 3D icons. 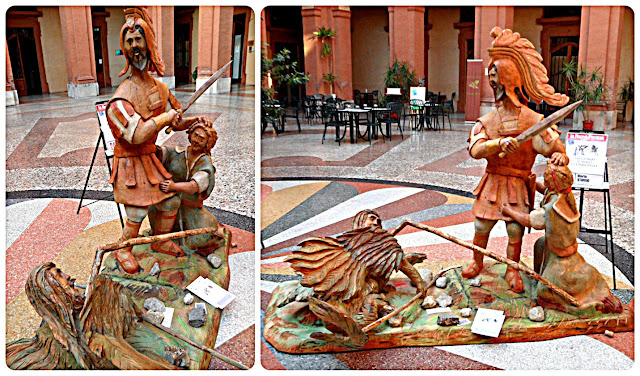 My personal favourite was an erotically charged work by Nicola Zamboni and Sara Bolzani. The princess is reminiscent of Diego Velazques' The Rokeby Venus. She is all surrender and a very feeble attempt at defending herself against San Giorgio's mighty spear. The symbolism of the spear is all too obvious.

The Princess, reclining as an image of sensual languor, might seem like a victim at the first glance. But there is a hint of a smile on her lips, and she knows that she is a conqueror.

St George appears very fierce and determined, but also rather un-saintly with his manly display of weapons and lust for battle.

The range of styles and ideas was astounding, from solemn classic to modern ironic interpretations. 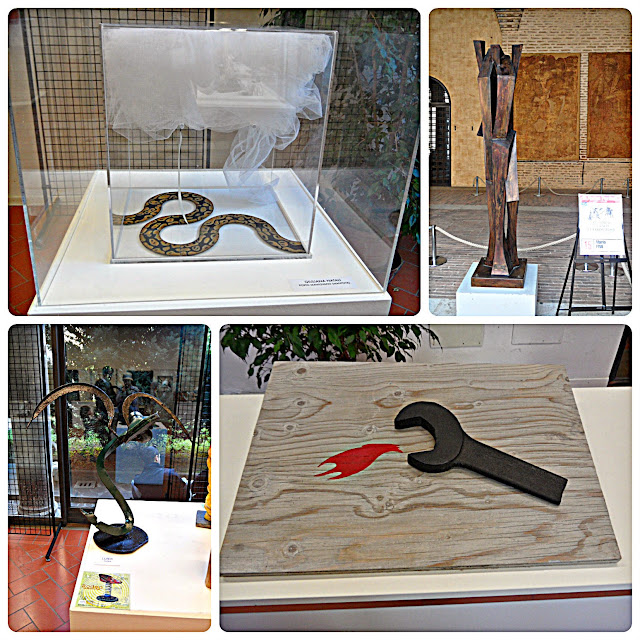 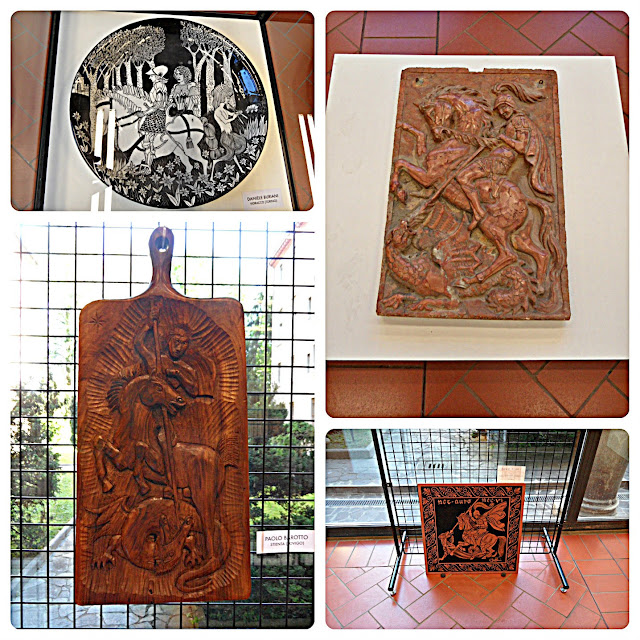 Eddie was much taken with a Lego group by Riccardo Zangelmi. It is an elaborate work made of Lego bricks, colourful and inspired.

He also absolutely loved a dragon made of green bottles, its coils cutting through the lawn like the sea waves. This is a work by talented Alberto Gambale.

A little sign by its side made me chuckle. It says: "Attention! Do not come near. The dragon is nervous". 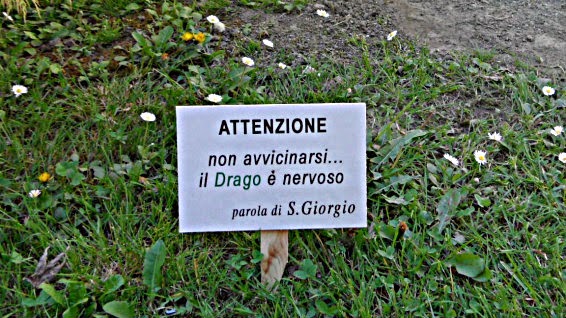 I cannot possibly show you all the photos I have taken, as my post would be a mile long.


For more information and photos, visit San Giorgio page on Facebook.
There is also an excellent album of photos by Alberto Scuarcia.