Until recently I had only a very vague idea of what sous vide technique was supposed to be. It sounded very scientific, and I imagined it to be used by the likes of Heston and other super-chefs. Imagine my amazement and delight, when I was asked to test some sous vide equipment at home. After a month of testing and experimenting, I can vouch that even technically-challenged cooks like me may achieve great results with the right gadgets.
I knew Sous Vide means "under vacuum", but I haven't seen anyone actually using it. Before the equipment arrived, I spend a few evenings watching videos on Youtube, and wasn't quite reassured. Youtube is a veritable landmine of information. There are so many videos that you might easily get lost. But I also felt inspired.
This is a revolutionary way of cooking, as all the nutrients and flavours in sealed pouches cannot escape, in comparison to the other cooking methods. It needs less fat and oil, so the meals are healthier. The texture of the finished meals is also different, it is soft, tender and melt-in-the-mouth when you get it right (you might remember my earlier disaster story when I tried to cook tuna).

PolyScience Vacuum SealingSystem (150 series) is an easy to use vacuum packaging system, which allows to keep the food fresh for longer (in the fridge, freezer or pantry). How does it work? Essentially it removes the air, which extends the freshness up to five times longer than normal preservation methods (great for decreasing the food waste and costs).
It has a sleek design and reminds me of a laminator. It consists of a compartment lid, two gaskets, lid locks and seal wire.

The control panel has several buttons: Auto (activates a vacuum cycle followed by a seal cycle), Pulse (for manual control of the vacuuming process), Seal (with sealing time of 5 seconds), Seal Plus (with sealing time extended to 10 seconds) and Stop.
It is easy to set up and operate: just place the food item in the plastic bag. You need at least 4.5cm of space between the top of the food inside and the open end of the bag. Put the plastic bag across the seal gasket, making sure it is positioned properly in the vacuum chamber, close the lid, click on both sides. Press the button of your choice, once the bag is sealed, open the gadget and remove the bag. Now the difficulties that I had: as the first time user, and a total beginner in sous vide cooking, I had some problems with sealing. For example, when you cook fish, you need to pat it dry completely or the bag won't seal as during the vacuuming, the juices start running up the bag and even out into the sealing chamber, thus making the sealing impossible. Like on one of the occasions when I defrosted the fish from the freezer, and though I patted it with the kitchen towel, it kept producing more and more liquid, so I had to wipe off inside the bag at the top several times before it was dry enough for sealing. 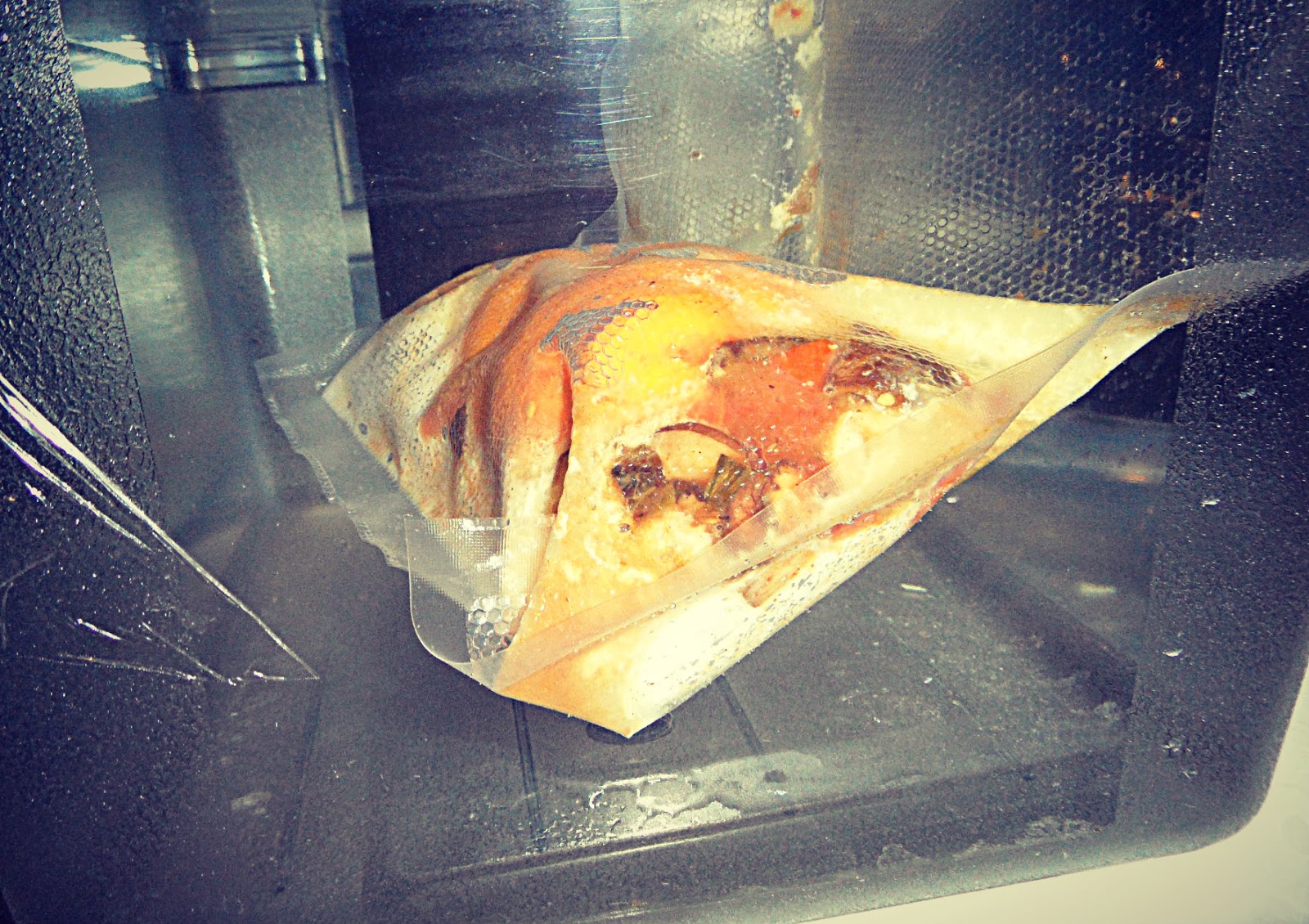 PolyScience Sous Vide Professional Thermal Circulator is easy to use. It is precise and maintains the programmed temperature through the cooking. The monitor screen shows the temperature. 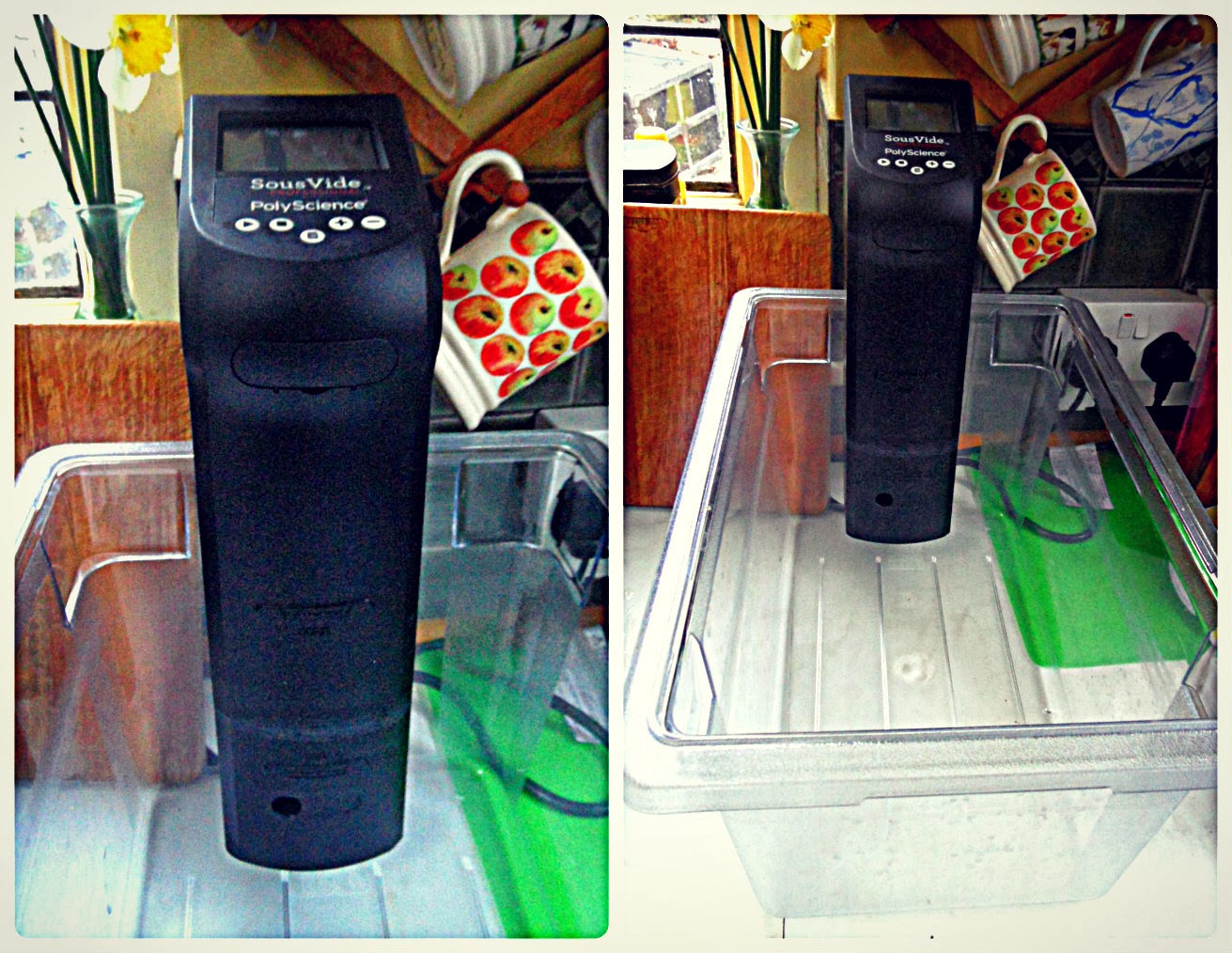 Timing and the right temperature are crucial, that's why the novices should invest in the cook book with sous vide recipes, for example, Sous Vide the Art of Precision Cooking. Without the book, I would have been totally clueless. Each recipe has a photo (I dislike the cook books without images), and suggests the correct temperature and time of cooking.

As the food is cooked in the bath, it doesn't acquire the browning which you achieve during the frying, grilling or roasting. It is easily remedied: either slightly brown the food item before sealing, or afterwards. I have tried both ways.

With the bath and sous vide thermal circulator, I discovered that once you set the thermometer in Celsius, then set the timer, switch it on running, the temperature on display goes back to Fahrenheit. The cook book gives the recipes with temperature in Celsius. Perhaps not a big deal, but it is an inconsistency which confused me (mind you, I am easily confused).

I am glad to have had an opportunity to test the equipment. I was getting more confident by the end of the month.