It is very trendy these days to portray Russia as the axis of evil and condemn all the Russians en masse. That's a mistake that the politicians with their own agendas do, and the common people follow. In the last few years I am yet to read anything vaguely-positive about Russia. Yet this is a country which has an incredibly rich culture and is full of inspiring stories. It truly pains me that because of the dirty political games on both sides there is a fear that my Mum and I might not be able to see each other again if she is not granted a travel visa this summer. For many years she has been doing her heroic journey, travelling for 22 hours by train to Moscow and from Moscow to London by coach. Several days of travelling, for the sake of seeing her daughter and grandchildren.
My Mum, Lyudmila Kravchenko, is a talented artist. She is well known in Russia. Enamel is her choice of art technique, and she has inspired and taught many younger artists.
Her personal exhibition will be soon open in the city of Perm.
Today I want to share with you one of her enamel pieces. It is a portrait of my son Sasha.
My Mum called it "Boy-Island". 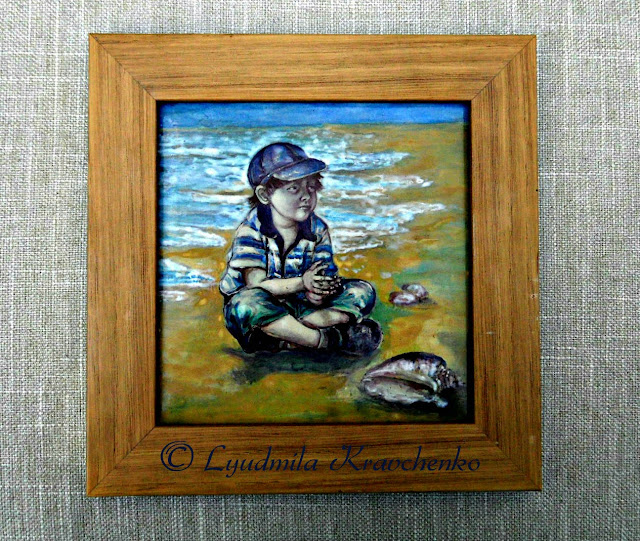 You cannot question the great minds of this world, and John Donne is famous for his beautiful haunting line "No man is an island".
Yet as a Mum of a son on the autistic spectrum, I could hesitantly argue that that's how it feels sometimes.
Here he is, my beautiful boy, sitting by the seashore, so close and so distant.
He is alone, immersed in his world, often aloof. He is not a faraway island, but a small isle next to the big land, a bit like St Michael's Mount, which is separated by the tides from the mother land. When the tides are low, you can walk to the island and reach him easily. When the tide is high, we are separated by the deep water and the waves of frustration, anxiety and misunderstanding.
And that's how my Mum sees it. Interesting enough, the original image of Sasha was taken during our trip to Paestum, an ancient Greek town in Italy, and in the photo he's sitting on the dry land among the ruins of the past.
My boy has just turned twelve. All these years I try to run across to him, battling the deep waters of the tide and the seaweeds that lash your feet. 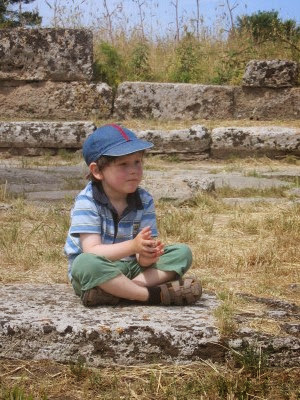