Kulich (pronounced KooLICH) is a Russian yeast cake that is traditionally served at Easter. There are actually two types of Russian Easter cakes, one made with the cottage cheese (pyramid-shaped) and a yeast cake, resembling a mix between a rum baba and a panettone (you can see both delicacies in Kustodiev's painting). 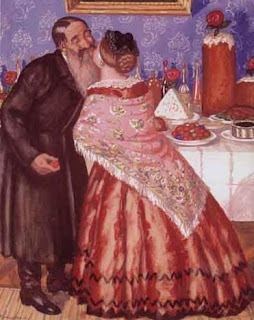 Just before Easter I have been searching online and in my books for a recipe for an easy Easter cake.
The recipe I finally used is a combination of several. However, it is heavily influenced by a recipe from"Cakes from around the world" by Julie Duff.

This cake is usually baked as a big tall tower or in small sized tins, like rum babas.

For this project I did a bit of a DIY. I wasn't able to find any suitable Kulich tins to buy in the UK, and decided that the ordinary soup/baked beans tins will do nicely (you can buy some very cheap tins of tomatoes and/or red kidney beans from the value range. I got mine from Sainsbury's)
You have to cut the tins carefully with a tin/can opener on both sides, so you have a see-through tunnel-shaped tins. Check that your tins are not plastic-coated, as then they won't be safe. 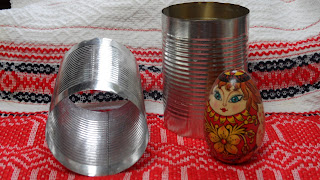 Add all the dried fruit and peel in a small bowl, pour 2 tbsp of sherry, leave for about an hour.
Pour the vodka into a small bowl and put the saffron into it. Leave to soak until the vodka is bright yellow. remove the saffron from vodka. 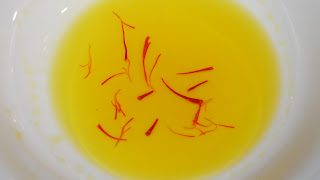 Sift the flour and spices in a big mixing bowl, add the sugar and yeast.  Stir in the soaked fruit and mixed peel, add the chopped almonds, and saffron infused vodka.
Warm the milk in a milk pan (do not boil) with the butter until it is dissolved, then let it cool to tepid, then beat in two medium eggs.
Pour your milk/egg mixture into the flour, mix well to make a soft dough. Now take it out onto the flour-dusted board and knead for about 8-10 minutes until smooth. You might need to add more flour as you keep kneading. The dough has to be quite elastic. Put it back in the deep bowl and cover with a clean towel. Leave it in the warm place for the dough to double in size (takes about an hour).
Now if you are using my DIY tins, cut the parchment paper and place the rolls of paper, so that they are slightly higher than the tins. I prepared six tins. Divide the dough into six pieces and shape them like a small tower, carefully place inside the parchment tubes in the tins (I have placed all the tins on the tray, which has been covered with the foil and oiled a bit).
Bake for about 40-45 minutes at 180C.
Once done (do the wooden skewer test, it has to come out clean) remove the tray from the oven and let the tins cool before sliding the cakes out of the tins.
You can make these cakes a day before serving and decorate on the day you eat them.
For the icing mix the icing sugar with the lemon and orange juice to get a medium runny consistency. Top up each Kulich with the icing. Once it is set, you can decorate them. 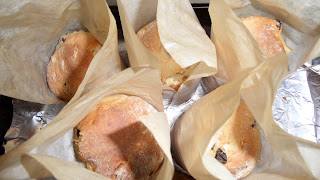 I have written the Russian letters Х В: Христос Воскресе (Christ has risen ).
Many Russians who observe the Easter traditions would take their cakes and decorated eggs to the church for the blessing. 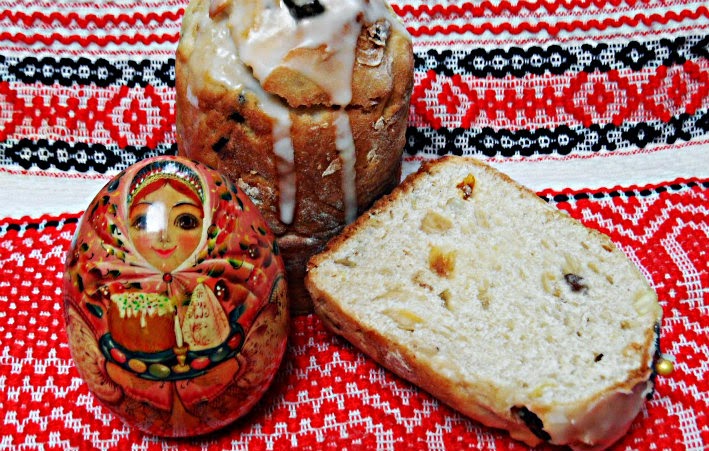 I am submitting my Kulich to the lovely Tea Time Treats challenge hosted by Lavender and Lovage and What Kate Baked. 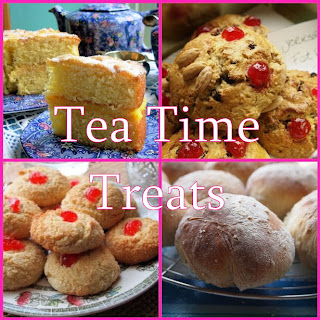