When I saw a post on BritMums, asking if bloggers wanted to review a new cereal from Kellogg's, I was curious to try it. I promptly emailed them, and in a couple of days a huge parcel was delivered to our address. It had 10 boxes of Mini Max. 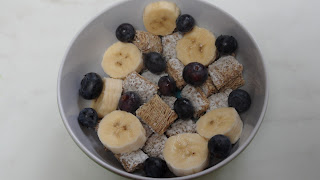 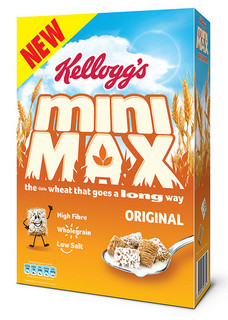 My older son Sasha always eats his cereals as snacks, without added milk, so of course, Eddie copies his older brother. He prefers to have a little bowl of cereals with added berries and chopped banana and a cup of milk separately. 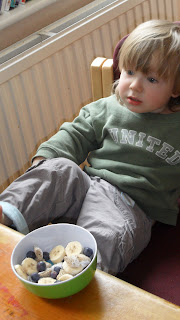 The size of the cereals is just right for toddlers. It is like a smaller version of the Shredded Wheat. I like the fact that there is less sugar than in many standard cereals for children. It is not over sweet. Each little cushion of wheat has one coated sugary side. The cereal has a high content of fibre, which is another bonus.
The test result is: Sasha wasn't very keen (but I was't surprised as he only loves Cheerios), Eddie and I enjoyed it. We also shared several boxes with the friends, and they said they liked it.

We also did some Easter nests, using rice crispies and Mini Max cereals. Though our Mini Max nests looked more like the eagle's nest in the rocks. 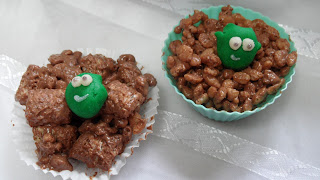 I know there was a discussion on Netmums etc about the new cereal and some concerns were raised regarding the use of the beef gelatin. As we are not vegetarians, this is not an issue for us.
The beef gelatin is used in Mini Max so the frosting sticks to each bit of cereal. It is also clearly labelled on the box though admittedly in small letters.

The grain used to make Mini Max is grown by UK farmers. That is another thing in its favour.

As a snacks-person myself, I found them a healthier option for snacking, and keep reaching for the box to pick a mini parcel or two while cooking in the kitchen.

Kelloggs' Mini Max comes in two flavours: original and chocolate (which we haven't tried, so no opinion on this variety yet)

If you want any more information, you can check out: www.kelloggsminimax.co.uk
Posted by Galina Varese at 16:39:00