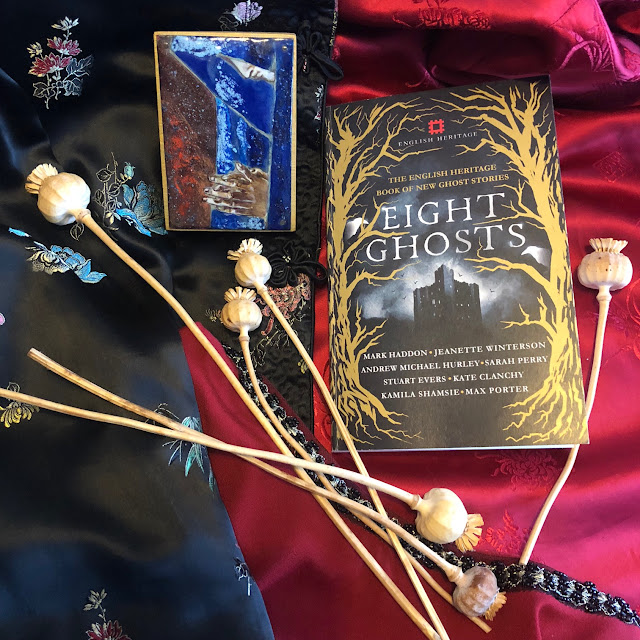 Halloween is almost upon us, and most book shops and supermarkets' book aisles offer a variety of ghost, Gothic and supernatural stories. While I enjoy this genre throughout the year, I tend to buy a couple of new books in October to put me in the mood.
Early dark evenings and supernatural books are a perfect combination.

The premises of this series of ghost stories was inspired. Eight authors were offered a choice of the English heritage sites to create their story around.
As a concept for spinning new tales of horror, it works on many levels.

The stories differ in quality and length. Some of them feel like a sketch which hasn't been finished, but have a potential to develop into a longer story.

Sinister background and tragic past of the heritage sites provide rich grounds for creating unsettling stories.
They reflect the style of writing of each author, sometimes quite predictable. For example, Jeanette Winterson's characters are a gay couple to be wed in Pendennis Castle.
Even her ghosts are battling against the conventional values and pay with their lives for their sexual identity.
Kamila Shamsie's protagonist is an immigrant, escaping from a war-stricken zone. It's a haunting story, but you almost think, the authors played it safe, not stepping out of their comfort zone.

The book starts with Sarah Perry's sad and disturbing story - They flee from me that sometime did me seek - set at the Jacobean country house Audley End. The mysterious Jacobean wooden carved screen which is undergoing a restoration, is a possessed entity which brings doom to people who work with it.
It is not explained why the screen only affects random workmen and women but not the members of the family living in the manor.

Mr Lanyard's Last Case by Andrew Michael Hurley depicts the unimaginable cruelty inflicted during the Jacobite trials at Carlisle castle. The way the rebels were treated after the battle at Culloden is beyond despicable. You don't need a ghost to be terrified to the bones, reading about the atrocities against the prisoners.

Cold War Bunker by Mark Haddon is not a ghost story as such, it's more of a sci-fi/ nuclear holocaust fiction, portraying the obliteration of the human race. It is typical of the Cold War fiction, and probably reflects the threat of a new Cold war, and military and ideological rivalry which is unfolding currently.
As a sketch, this story was perhaps the strongest, and I would be interested in reading an extended version as a complete novel.

Kamila Shamsie's Foreboding tells a sad story of Khalid who starts working as a security guard at Kenilworth castle. He doesn't believe in ghosts, thinking that when you've lived through  wars you don't need to invent stories to scare you. The ghost he encounters is not from the castle's past, but someone very close to him.

Never Departed More by Stuart Evers is a tale of a troubled American actress who stays in a British castle, trying to immerse herself, while rehearsing her role of Ophelia. While wandering around the castle grounds, she encounters a handsome stranger in an airman's uniform. Is she slowly descending into madness, or is the veil between two worlds being lifted?

The Wall by Kate Clanchy takes us to the old Housesteads Roman fort nearby Hadrian's Wall. You can guess the identity of the ghost from the very beginning. It's a story of a family, coping with the loss of their loved one, a tale of rediscovery of one's strength and love of life.

As Strong As Death by Jeanette Winterson is set at Pendennis Castle. Tamara and Jamie plan to be wed in a few days' time. Their wedding party includes some rather colourful guests, and I don't mean their old uncle Alec. It's a story of love, life, death, identity and acceptance, with a glimmer of hope and consolation.

Mrs Charbury at Eltham by Max Potter has a malevolent ghost, stalking a young woman since childhood. The narrative jumps in time, from the present to the 1930s and back. An old woman explores the Eltham palace, and remembers how cruel she was to her younger sister and dismissive of her fears.
Is she truly encountering a supernatural apparition, or is it her guilty consciousness and memories of her indifference to her sister which make her see things?

For me Sarah Perry's story was the most unsettling, because it is so totally bleak, and indiscriminately unfair. I appreciate, the supernatural might have no logic, but this one seemed to be particularly nasty in picking its victims.

There is also a fascinating essay by Andrew Martin - Within These Walls: How the castles, abbeys and houses of England inspired the ghost story. It talks about how the Gothic literature got its name - "from its association with medieval "Gothic" buildings and ruins, from the monasteries and castles with their underground passages, brooding battlements and crumbling staircases".

You will enjoy A Gazetter of English Heritage Hauntings at the end of the book. It includes short history data of many historical sites. It is not a comprehensive guide, as many sites are not included, but enjoyable nevertheless. I suggest reading a short note on Elham as it makes you understand the story much better.

This book will make a great stocking filler for any history buff or ghost story fan.

P.S. I bought it in Waterstone'w where it's currently on buy one, get one half price promotion. 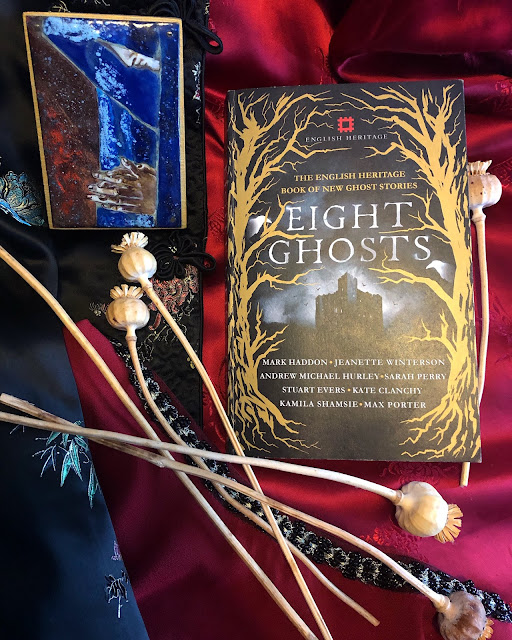