The Girl Who Walked on Air by Emma Carroll 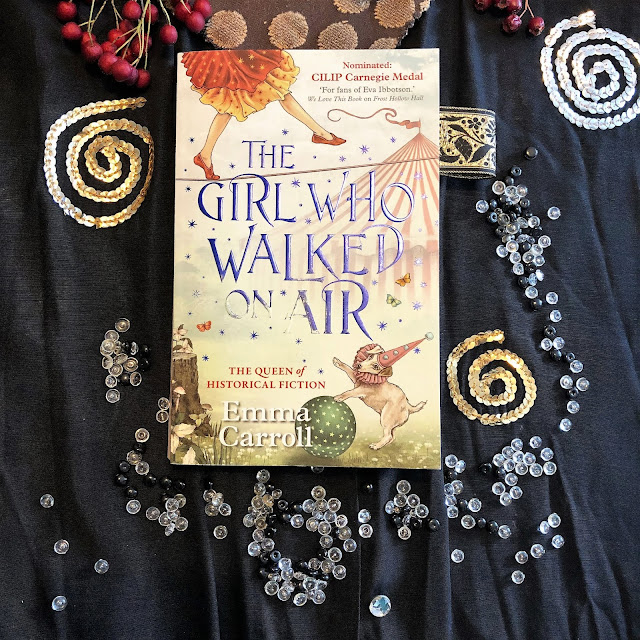 Eddie and I have recently discovered the fabulous new (to us) author - Emma Carroll. First we read Secrets of a Sun King. Eddie loved it so much that we bought three more books by Emma Carroll.

It was he who's chosen to read The Girl Who Walked on Air next.

This historical novel for children begins in the grounds of a Victorian circus, moving later across the Atlantic to the Niagara Falls setting. We travel together with young Louie.
Louie Reynolds has been abandoned by her Mam as a baby, and brought up by a kind trapeze artist Jasper.
Mr Chipchase's circus has been the only home and family she ever knew, with its flaws and idiosyncrasies, with a fair share of minor divas. The colourful artistic setting feels very authentic.

Louie dreams of being a showstopper. She's been practicing on the tightrope wire and can't wait for her chance to show the world what she can do. She is daring and stubborn, and very ambitious. For someone who hasn't actually performed in public, she is very self-assured that she is the showstopper material.
Mr Chipchase, on the other hand, tries to keep her out of the public's eye, allowing her to do menial jobs like selling tickets or mending clothes for the other performers. When being in public, Louie is asked to cover her flaming red hair to be less recognisable.

Louie is quite pig-headed and self-centred - like many artistic souls - and once she got into her mind that she wanted to perform for the more famous circus run by Mr Wellbeloved, she leaves behind her kindly guardian Jasper, her little dog Pip and the circus which has sheltered her from the terrors of the outside world. It's not that she doesn't feel sad or guilty for abandoning them, but she is very much driven by her ambitions as well as a desire to discover her mysterious Mam.

Mr Chipchase's circus is a veritable medley of personalities and talents. There is Jasper, a talented trapeze artist who brings up Louie as his own child. There's a knife-throwing eternally-sulky Kitty, Mr Chipchase's daughter. A fortune teller who reads Tarot cards... Horses, sequins, tightrope... there is a lot of drama, with a motto "The bigger the danger, the bigger the crowd".
And the punters are brought in by a "whiff of death". I suppose, nothing changes. Just look at those silly Youtubers who film themselves dangling from the cliffs or bridges just to bring more followers and likes.

Louie accepts this "whiff of death" logic and wows the crowds with her daring acts, once she has a chance to show her talents on the tightrope. Little does she know, that playing with danger will bring her even more perilous and precarious challenges.

Louie's hero is Charles Blondin, the man who crossed the Niagara Falls, with his own manager on his back. But as it often happens in real life, our heroes might have feet of clay. When Louie sees Blondin in real life, she is left disillusioned.
I won't be giving any spoilers as to why she changes her mind about Blondin, you'll have to find it out yourselves.

The world of the Victorian circus was pretty cruel and abysmal. The children were dispensable commodities. There are quite a few moments in the book when you will be appalled at how vulnerable those children were.

This novel has all the right ingredients of a successful book - a strong female lead, a nasty villain, a colourful authentic background and lots of subsidiary, lesser characters who bring the plot together. There is a suspense and danger lurking on almost every page, with enough gruesomeness to appeal to the children who enjoy macabre stories with ghastly villains (like Lemony Snicket's saga, or Dahl's Witches).

Louie is a brave hero. Her determination, tenacity and stamina, both physical and psychological are an inspiration and a cautionary tale.

This is the second Emma Carroll's novel we've read recently with Eddie at bedtime, and we've already got a couple of other books by the same author to read later.

If you've started pondering on Christmas gifts for book lovers, we will heartily recommend The girl who walked on air.

Have you read any of Emma Carroll's books? Which one would you recommend we read next? 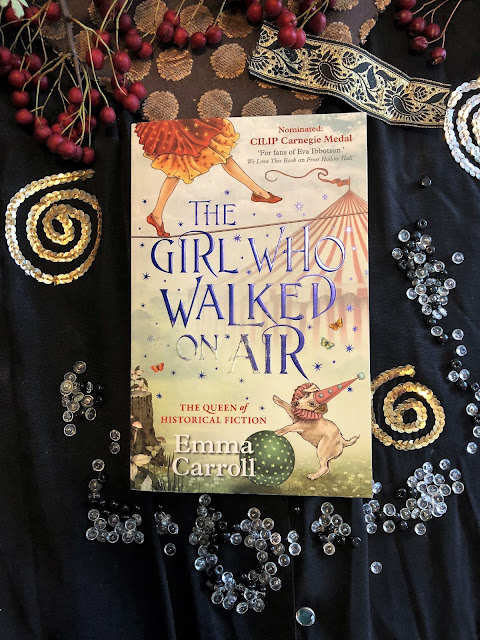