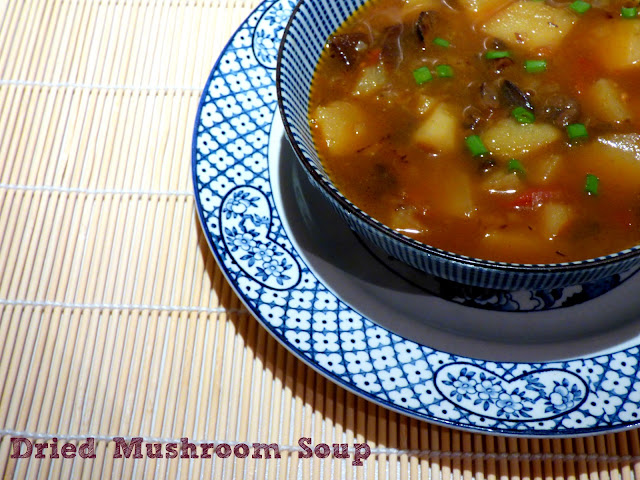 Yesterday evening, as we were getting ready for bed, there was a loud bang downstairs. Thankfully, we were all upstairs, and nobody got hurt. I ran down only to see that part of the plastered ceiling has collapsed in the hall. Dust, bits of plaster scattered everywhere... We picked the bigger pieces and swept the rest into a big box. Alas, that was not the end of it. At 3am the bigger part has fallen down, scattering broken plaster all over the room.
It looked like a movie scene. You can almost imagine zombies appearing from the broken cracks...
So, I spent most of the day today, clearing the debris, dusting the bookshelves and putting books into boxes to take away. We had to throw away the rug, it was totally ruined. And now we need to find someone willing to break the rest of the plaster above, remove all the debris and re-build the ceiling.
That's the pleasures of living in an old house, there is always something needed to be repaired. And we only just had a garden wall repaired a week ago. 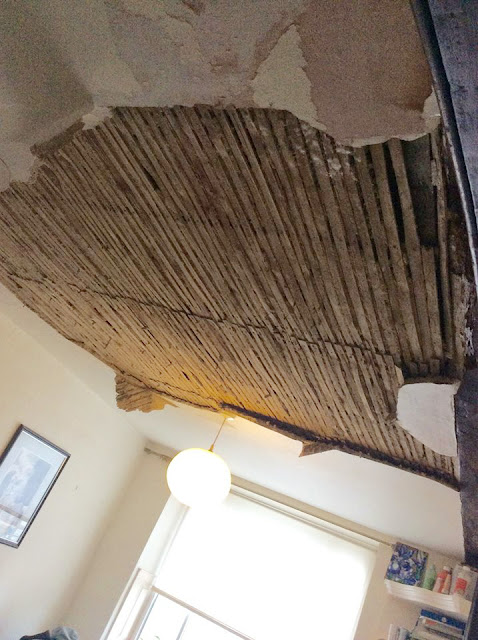 To cheer us up a bit, I cooked pancakes for breakfast. Eddie usually requests a "face" pancake, with banana slices for eyes, marshmallows as hair and whipped cream for a beard.

For dinner I cooked a simple vegetarian (or even vegan, if you don't add any cream) soup with dried mushrooms. 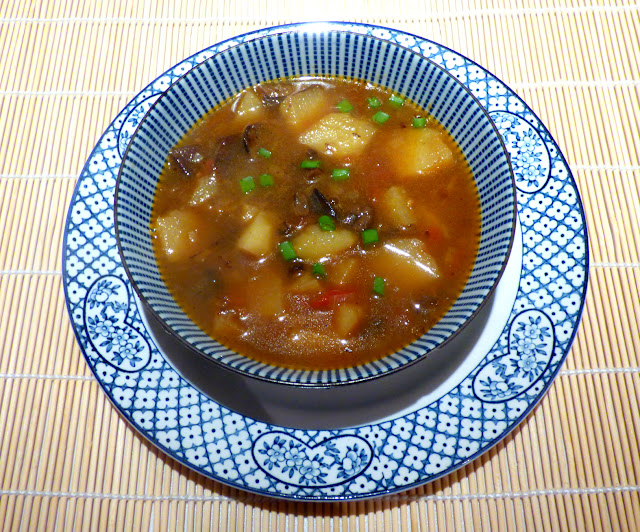 Pour enough freshly boiled water to cover the dried mushrooms in a deep bowl, let them soak for 15 minutes.
Finely chop a couple of shallots, and fry in the olive oil for 5 minutes, stirring frequently. Remove the soaked mushrooms and chop them. Add to the onions, and keep frying for another 2-3 minutes, adding a bit of butter. Place the ingredients in a cooking pan, pour the mushroom liquid in, add a sliced tomato and cook for 15 minutes. Add two peeled and chopped potatoes, and cook for another 15 minutes.
Serve hot, with a spoonful of single cream or soured cream (or no dairy for a vegan meal).

I used a pack of dried mushrooms from Poland - called brunatny podgrzybek or the bay bolete in English. In Russia this mushroom is known as the Polish mushroom. I found these mushrooms in a Polish deli, they are less expensive than porcini.
They work very well in a soup, giving a strong earthy flavour.