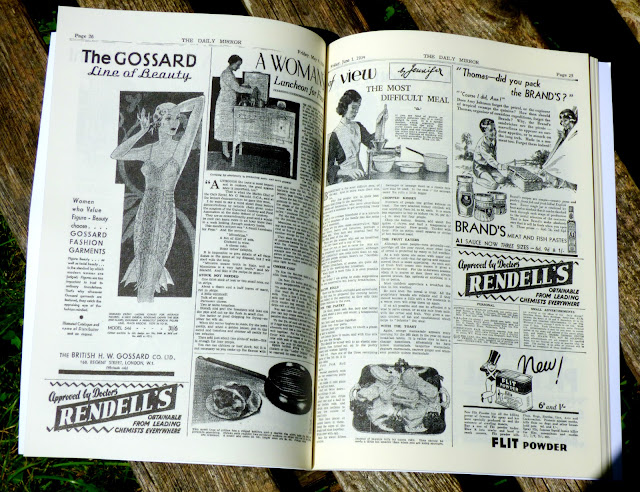 The world's largest Original Newspaper archive, Historic-Newspapers, has launched a new range of Vintage Recipe Cookbooks. Take a trip down memory lane with this collection of books from different decades of the XXc.
I have received two books from the series - Recipes & cookery ideas from 1930s and 1950s newspapers. 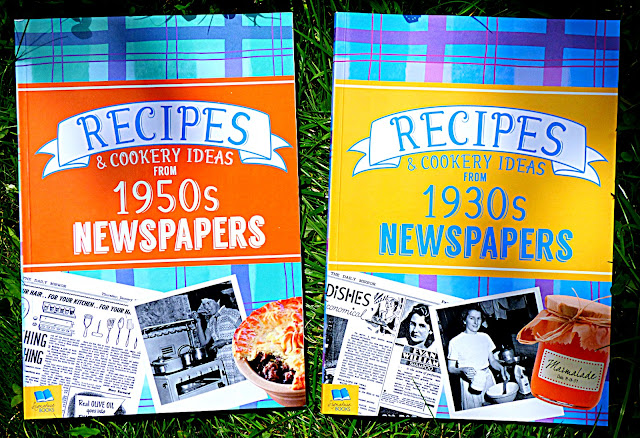 These are not simple cook books - there is no index or list of ingredients to be found. The recipes represent only part of each edition. The content of the books is reprinted from the vintage newspapers, just as it was first published. There is a lot of ads and agony aunt-type of columns.
These books give a fascinating insight into each decade they cover. Some of the content is so non-PC, but historically accurate of course. Adverts, health and beauty advice, recipe tips and agony aunt's columns are clearly targeted at housewives.

Available in both paperback and hardback versions which could be personalised with a recipient's name and a message. You could also have a recipient's name embossed in gold on the front cover of the hardback design.
The whole range is available on Historic Newspapers site, retailing from £12.99. 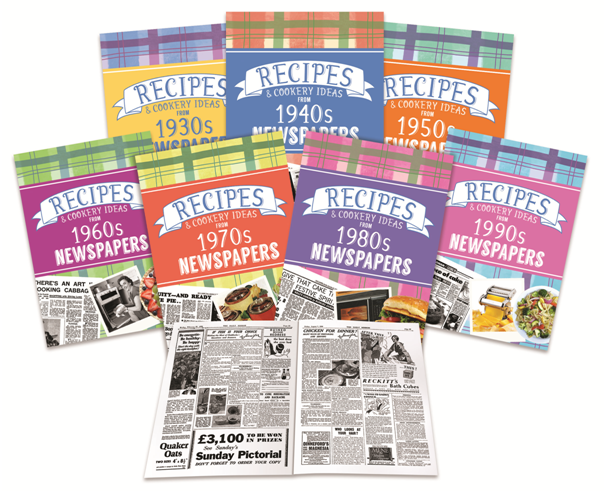 Recipes & Cookery Ideas from 1930s newspapers showcases an instantly recognisable historic period. The recipes reflect the thrifty ways of the 30s, with the aftermath of The Wall Street Crash of 1929 and unemployment.
The recipes are rather frugal and economical, but quite creative: potato puddings, stuffed tomatoes, fruit flan, madeira cake, scotch shortbread, tomato jam, flapjacks, marrow chutney, welsh pikelets, welsh rarebit and many more. 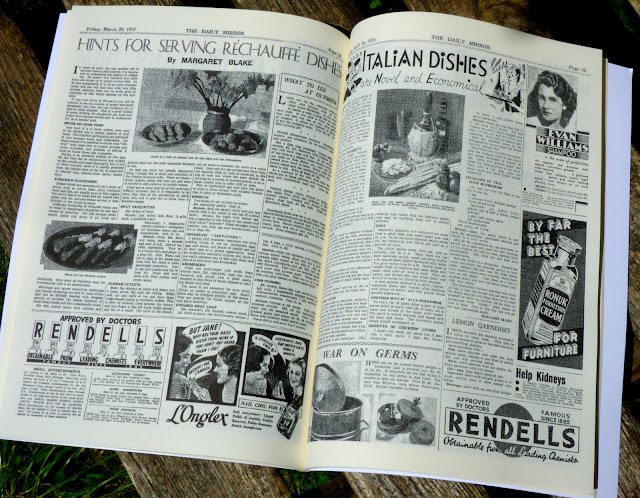 Foraging is encouraged - for example, make a salad with fresh tender young dandelion leaves or brew a dandelion beer. Or go blackberry-picking for a wide selection of jams and jellies.
Canned foods are not to be frowned upon - "How many housewives realise the number of ways in which it is possible to serve corned beef, for instance?"
"Bacon is so exceptionally cheap just now that it is used for all kinds of tasty supper dishes".
"Four housewives tell our Cookery Expert how they use up Stale Bread. Have you tried: Bread Omelet? Toasted three deckers? Crisped breadcrumbs for breakfast? Chocolate bread pudding?"`
"Faddy people" are reprimanded for looking down upon offal. Though I confess the idea of the kidney, breadcrumbs and herbs casserole didn't appeal to me either.
I love entering competitions, and enjoyed reading a small feature about the so called economy competition, where you had to send 3 economy tips for the home. The first prize winner received £2.
Another competition to name a race horse offers a much more tempting prize of £200.

The frugal cooking theme is present in Recipes & Cookery Ideas from 1950s newspapers as well. Rationing ended in 1954, so this decade still felt the influences of the war.
You learn how to cook a tripe and potato hot pot and how to make a waistcoat out of an old mattress. 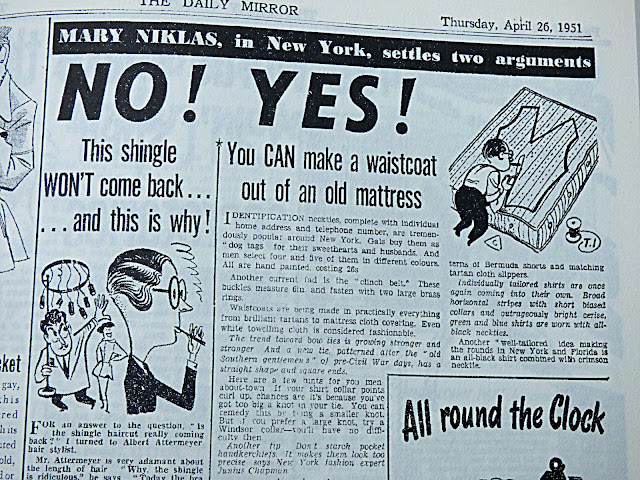 This was the decade when the Daily Mirror has created a cartoon character Patsy who showed the housewives how to cook. 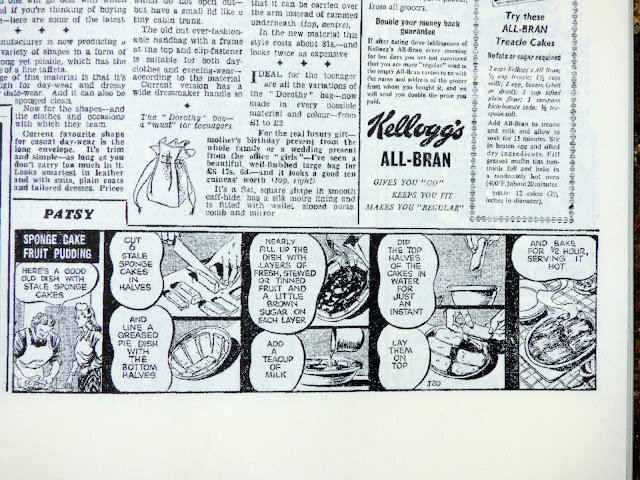 As the decade progressed, more indulgent ingredients and more exotic recipes started to appear on the pages of the newspapers - for example, ravioli with spinach filling, curried potatoes, Roman pie, Normandy soup, sardines Provencale, Milanese soup, risotto and even pizza.
There are some absolutely wonderful snippets of "posh" life too, like the feature on Pond's as promoted by the Lady Moorea Hastings "whose family dates back to the times of William the Conqueror". "Famous for the beauty of her dark eyes and the fairness of her skin, Lady Moorea relies on a simple, inexpensive beauty care that is available to everyone". Pond's gets an endorsement by the "outstanding beauty" Viscountess Erleigh as well as by Elizabeth, Lady Rendlesham with a "breathtaking quality in the clear radiance of her complexion" and other upper class beauties.
Looks like the aristocrats were endorsing the products even in those times. 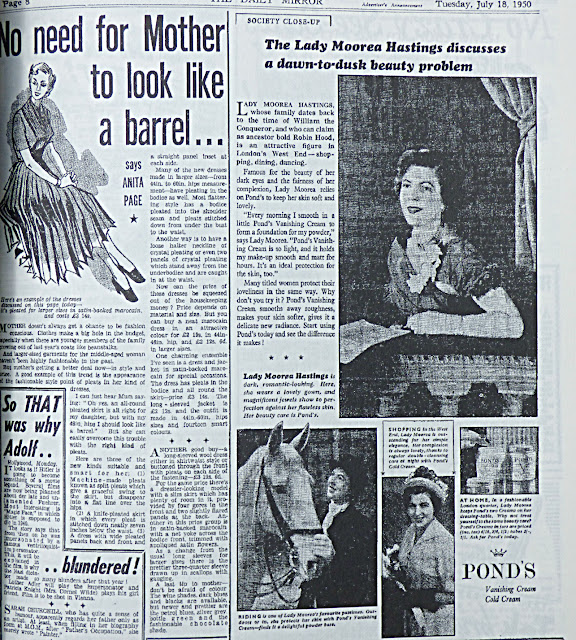 According to a recent thread on one of the parenting forums, meat with fruit is a bit of a Marmite problem, some love the combination of flavours, some clearly detest it (I was surprised at how many voiced their dislike).
This is obviously not a new discussion, as the feature from 1959 shows: "What, meat with fruit? Not as silly as it sounds", writes Ambrose Heath on his cookery page. He recommends cooking lamb cutlets with apricots. The fruit, tinned or dried, can be served hot with the meat.
I'm not the biggest fan of tinned fruit, but for the purposes of experimenting decided to have a go, and serve tinned apricots with grilled lamb cutlets. 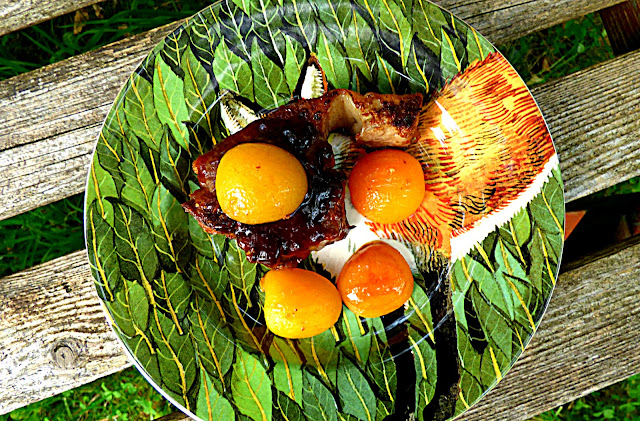 And while it was a perfectly edible combination, I think fresh grilled apricots would have been much better. 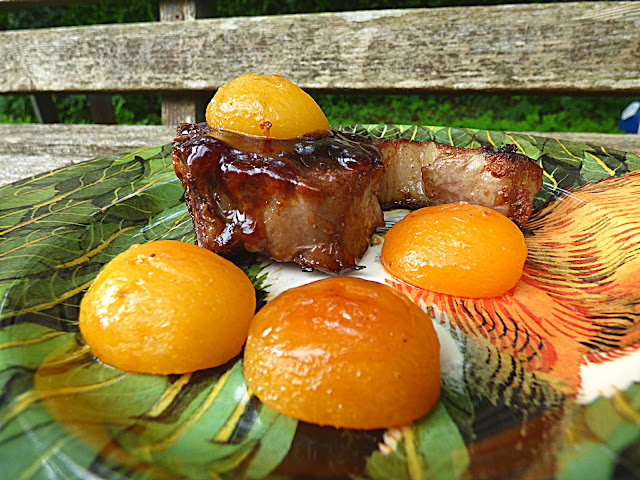 Recipes & Cookery Ideas From... will make a lovely gift to any history buff or foodie.
Which decade would you choose to explore?

Disclosure: I received two books for the purposes of reviewing. All opinions are mine.
Posted by Galina Varese at 17:19:00