The Buddha in the Attic by Julie Otsuka

There are books which touch your heart and stay with you long after you turned the last page and closed the book. "The Buddha in the attic" by Julie Otsuka is one of them. I read it over a month ago, but keep thinking about it. It is a truly haunting story, very moving and powerfully evocative. 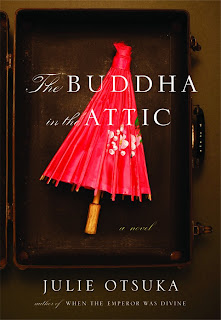 Julie Otsuka narrates a story of the Japanese mail-order brides, who travel to America in the interwar period, full of hope. On arrival, most of their hopes are dashed by the reality. The photos of the young grooms they were expecting to meet, turn out to be old or completely fake. They escape the poverty of their Japanese background only to plunge themselves deep into the drudgery of life in America.
There is no single protagonist or narrator. It is a story told by multiple heroines, mostly nameless, in the personal plural.
This literary device has brought back memories of the ancient Greek theatre and the phenomenon of the Greek chorus. If you are not familiar, with the ancient Greek plays, the Greek chorus was a group of masked performers. They spoke in unison, and were attired to look alike, wearing the identical masks. In a way, the Japanese mail brides represent the same character, a young bride who arrives to San Francisco confronted by the cruel reality of her life as a poor immigrant, scorned and ignored by the white population, reduced to the role of the slave by her husband. Yes, they are all different women with different fates, but there is a great sense of unity between them, and a uniformity of their great expectations being shattered. They breathe and talk as one organism.
The book is divided into chapters, one more poignant and harrowing than the other. Just like the Greek chorus, they are offering the background information and tell their hidden secrets and fears.
Despite the fact, that most of these women remain nameless, there are single episodes or even one-sentence narratives that catch your breath and linger in your memory. How could you forget Mrs Giordano and her elderly mother Lucia, another sad immigrant who found a soul mate in her Japanese servant.
"Lucia was even lonelier than we were, and almost as short, and once she overcame her fear of us she never left our side. She followed us from one room to the next as we dusted and mopped and not once did she ever stop talking. Molto bene. Perfetto! Basta cosi. And for many years after her death her memories of the old country would continue to linger with us as though they were our own: the mozzarella, the pomodori, the Lago di Como, the piazza in the center of town where she went shopping with her sisters every day. Italia, Italia, how I long to see it one last time".
Some of the secrets told are too terrible to comprehend, like one nameless heroine, who gave birth to twins, "which were considered bad luck, and asked the midwife to make one a "day visitor". You decide which one" Or the baby smothered by their mother for being both girl and boy.
The Birth and The Children chapters would leave you in tears and emotionally shaken.
Each chapter is dedicated to yet another aspect of the immigrants' life.
The Greek chorus of the Japanese wives sometimes speaks in unison, almost synchronized. Individual experiences are shaped to create a saga of the generation.
It is a beautiful book, masterfully written and totally heartbreaking.
My only disappointment was the last chapter when the narrative changes from the Japanese women to the Americans left behind after the deportation of the Japanese immigrants. I wanted to follow the line of the Japanese ladies. In fact, I did. As soon as I finished reading the book, I started to google for more information about the uprooted Japanese families and the internment camps.