I love Welsh cakes, I do, but for some reason I have never made them before. The same goes for the scones, love them but always buy them, especially that we have a fab little cafe-bakery locally which makes fab scones. On the previous trip to Cogges, when we visited the kitchen, the ladies offered us some Welsh cakes and also gave me a recipe for Apple Welsch Cakes to try to make them at home. And I'm pleased to say, they turned out to be as tasty as the ones made by super-cooks at Cogges. 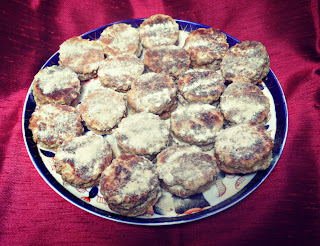 My great grandma Alexandra (or Shurochka as she was known among the friends and family) used to be a cook in the baron's household in the pre-1917 era. I would imagine she had a similar stove to work with. She used to tell my Mum when she was a young girl that the "downstairs" girls would not eat the food served to the "upstairs" folks because they found it very odd and unpalatable.
The master of the house once offered a golden coin to the maid for her to try one of the oysters which were served to the guests. She was very reluctant, and then started screaming as she claimed the oyster was squeaking and moving inside her throat. All the guests were amused. The maid got her coin, but from then onwards all the girls downstairs were even more suspicious of the fancy food. My great gran was reminiscing how she made the fish stock from several varieties of the best fish, and to clear the stock she would throw a handful of caviar inside (which was later discarded)... Oh, but I am digressing...

If you visit Cogges, you could observe how the ladies in the kitchen work their magic. There's always something cooking and some tasty dishes to sample.

Rub the butter into the flour until the mixture resembles breadcrumbs.
Add the rest of the ingredients, mixing to form a stiff dough.
Roll out fairly thinly (about 1/2cm) cut out and cook on a hot griddle, turning once.
Once cooked, sprinkle with sugar and cinnamon.


I have followed the recipe as printed above, the only thing I did differently was to grate the apple rather than chop it, as my older son doesn't like bits in cakes (and grated fruit or veg is easier to "hide").

They were absolutely lovely hot, sprinkled with the icing sugar. Thank you for the recipe, Cogges ladies!

P.S. I have asked permission to publish this recipe on my blog and to take the photos in the kitchen.