Do your children love music? And Puzzles? Does having a jigsaw activity pack with both elements sound like a fab idea to you?

My 2-year-old Eddie is forever asking for music (the way he pronounes the word, it sounds more like "muzikah"). He particularly likes listening to children's voices.

We were lucky to receive an activity pack from Music Room for reviewing. 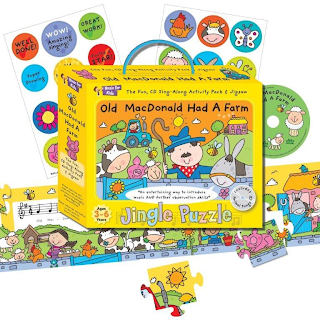 The activity kit comes in a sturdy box which contains a 1m long puzzle, a music CD, two sets of stickers and a colouring sheet.
Boxes, who doesn't enjoy opening them? Eddie was very excited at the sight of the bright and cheerful box, and even happier to see ist contents. We had to listen to the new sing-along CD at once.
Personally I am not that keen on children's music performed by children, but I am clearly not the intended audience for the CD, because Eddie loved it a lot, and he has been asking to listen to it every day since the box arrived. The CD includes a set of well known animal songs like Mary Had a Little Lamb, Baa Baa Blacksheep, Daddy Fox and many more. 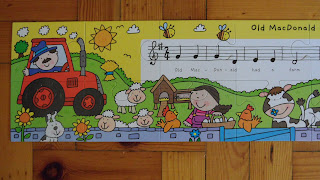 The metre-long puzzle is very colourful, it consists of big chunky pieces. As Eddie is a bit young for it, I helped him to finish the puzzle. 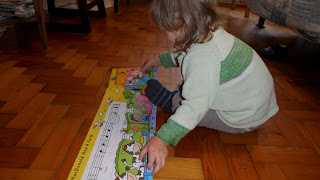 After the task was accomplished, we named  all the animals portrayed on the puzzle and put the pieces back in the box. As for the stickers, I confess they didn't end up where they were supposed to be, as my older son found the stickers while I was in the kitchen (and Eddie had a nap in his bedroom) and stickered them all over the box. 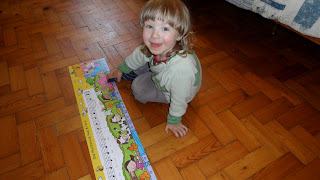 This activity set would make a lovely birthday or Christmas gift for anyone who loves Old MacDonald.
I have one Old MacDonald Had a Farm Jingle Puzzle to give away. To be in with a chance, please fill in the Rafflecopter form below.
Leaving a comment is a must step to be entered in the draw (please do not click on the button, saying you did, if you haven't, as I can actually see it). You can do the other 3 steps as bonus entries, but they are not obligatory.
Good luck!
﻿
a Rafflecopter giveaway
Posted by Galina Varese at 15:02:00