Death Makes No Distinction (A Dan Foster Mystery no.3) by Lucienne Boyce #BlogTour 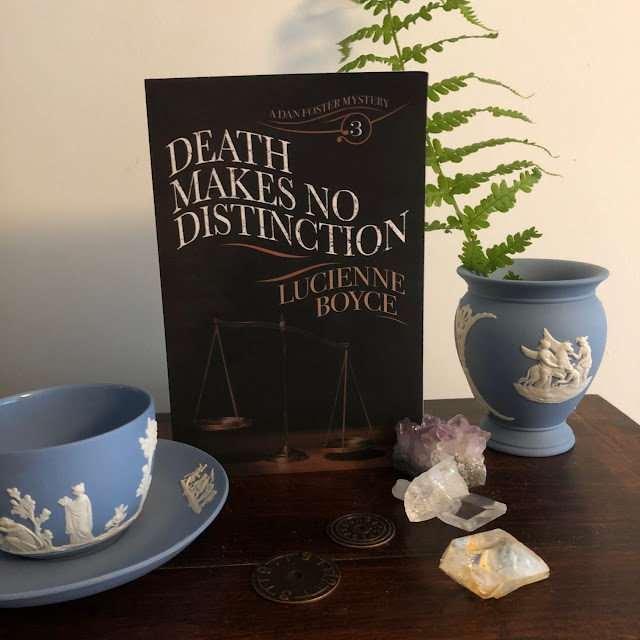 Odd, thought Dan, how dressing up murder in silks and satins instead of cheap cotton made it less acceptable...

Death Makes No Distinction by Lucienne Boyce is the third book in a Dan Foster Mystery series.
The book reads well as a standalone, though I imagine it would give a deeper insight in the family and police office relationships, if you've read the previous two books.
This is my first meeting with Dan Foster, who is a Bow Street Runner.

References to his background let us understand his character better. He comes from the world of extreme poverty and squalor, his mother having to sell her body for living. If it were not for his adoptive father Paul, who brought him up and gave him a decent start in life, Dan would be on the opposite side of the law.

The Georgian London is portrayed as a city of two opposites - from the opulence of the palaces and mansions, and the world where a five hundred guineas are easily thrown away in a single bet - to the destitute squalor of the poor hovels, where a human life is worthless.

And Dan in a way is a shuttle between the two worlds. He is the man of the law, but he also understands what it is to live in the abject poverty, deprived of the basic human needs.

To him, a human death is worth investigating, whether the victim was a beggar or a grand lady.

The novel starts with a discovery of a murder victim. "A beggar woman had been found dead in the outhouse of a public house at Holborn. Such deaths were not uncommon on a cold, damp night, especially if the deceased was very young or very old".
The young woman was brutally beaten up and raped. Nobody will miss her, nobody will lament her death. She is one of the unnamed victims, a nuisance to the owner of the outhouse who claims she keeps a respectable house.

Trying to find out who might have seen or heard anything related to the murder, Dan is late to his sister-in-law's wedding. Understandably, his wife is not amused. Being married to a Bow Street Runner, she has to endure his constant absences and inconvenient hours.

Setting out to solve the murder of the beggar woman, Dan is ordered to drop the case. He is wanted to work on the case of Louise Parmeter, the lady of the demi-monde, and the former mistress of the Prince, among many others. She's been found dead in her office, and now His Highness wants the killer to be brought to justice.

This is not an offer Dan can refuse. His job, position and living depend on it. Apart from the actual murder, there is a mystery of the missing manuscript, which Louise Parmeter was writing. "She often said that there were many who would prefer Memoirs of Herself and Others not to be published. She used to laugh and say she was going to dedicate it to "the Lords, Generals and Politicians of Great Britain". If the missing book is published, it will cause a great deal of embarrassment "of the most delicious kind".

Dan is committed to solving both murders. His persistent inquiries ruffle many feathers, and his family is targeted by the ruthless shadowy enemy.

Death Makes No Distinction is a skilfully crafted historical mystery. The Georgian London setting is vivid and dynamic, realistically constructed and true to life.
Looking forward to catching up with the previous books in this mystery series, and to the forthcoming book no.4. 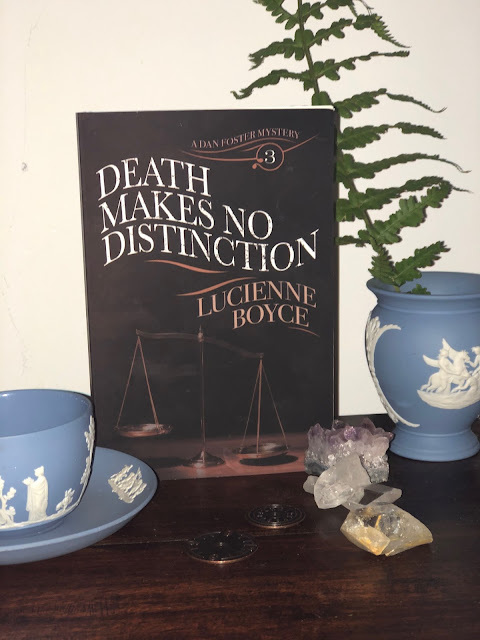 This post is part of the blog tour. Please check out the other blog reviews.

Many thanks to Lucienne Boyce, Silverwood and Rachel's Random Resources for my copy of the book! 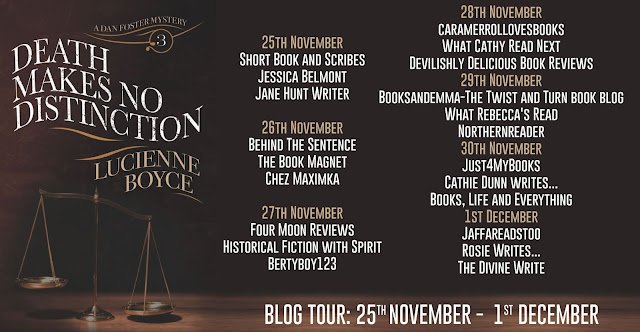 Author Bio:
Lucienne Boyce writes historical fiction, non-fiction and biography. After gaining an MA in English Literature in 2007, specialising in 18C fiction, she published her first historical novel, To The Fair Land, in 2012, an 18C thriller set in Bristol and the South Seas.

Her second novel, Bloodie Bones: A Dan Foster Mystery (2015) is the 1st of the Dan Foster Mysteries and follows the fortunes of a Bow Street Runner who is also an amateur pugilist.
Bloodie Bones was joint winner of the Historical Novel Society Indie Award 2016, and was also a semi-finalist for the M M Bennetts Awards for Historical Fiction 2016.

The second Dan Foster Mystery, The Butcher's Block, was published in 2017 and was awarded an IndieBrag Medallion in 2018.

Lucienne has appeared on TV and radio in connection with her fiction and non-fiction work. She regularly gives talks and leads walks about the women's suffrage movement. She also gives talks and runs workshops on historical fiction for literary festivals, Women's Institutes, local history societies and other organisations.

Lucienne is currently working on the 4th full-length Dan Foster mystery, and a biography of suffrage campaigner Millicent Browne.