What Empty Things Are These by J.L.Crozier 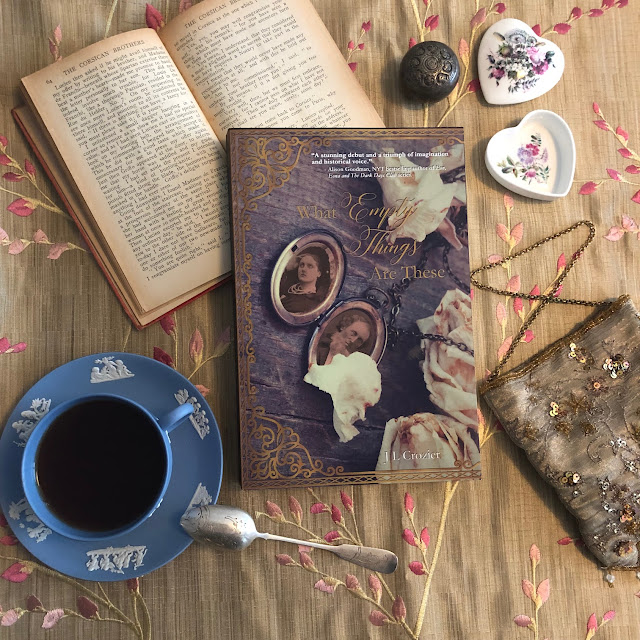 "Wandering from room to room, I felt myself a child again, examining the spaces about me and imagining their history, though there was no history here save that of a loveless marriage".

Adelaide Hadley is engrossed in her book, when her husband arrives home unexpectedly and catches her unawares. In a fit of temper - he disapproves of her choice of a book, it being Mr Collins's The Woman in White - and raises his cane to hit her, when he suffers a stroke and falls into a coma.
"There lay he who raised his voice at the notion of women reading sensation, at this literature's stirring of imagination among the weak, at the distraction from duty, at the wanton tempted away from their virtues..."

Thus begins a dark, complex novel by J.L.Crozier - What Empty Things Are These.

The story is set in the 1860s Britain, when women and children were considered as mere possessions of the man of the house. Rigid Victorian laws, rules and customs enforced a male-centred dominance.
The man "disciplining" his wife was a totally common phenomenon in the Victorian era.

Adelaide has to leave her dark, tight cocoon of dependency and begin to change her life, step by tiny step. The newly found freedom is frightening and intoxicating at the same time.
While her husband is in a state of coma, slowly deteriorating and rotting, Adelaide has to re-evaluate everything she knows about running the house, and take steps to make her future a bit more secure.

And it's not only her own future that is going to be affected. Her maid and confidante Sobriety and the other womenfolk who serve in the house, depend on her change of fortune.

The title bears its name from the discussion Adelaide has with the family solicitor, when Mr Hadley's will is disclosed. The widow will be left with only a small annuity, which won't be even enough for the upkeep of the house. Bypassing his wife entirely, everything will go to their son when he becomes of age to be the owner.
"Mr Gordon laid his metaphorical parcels before me and I thought, idiotically: What empty things they are".

Locked in a loveless, abusive marriage - Adelaide was a child bride to a man her father's age - and forced to give up her only child to the ministrations of the strict nanny, her story is poignant and dark.
Her life is dreary, she as much a slave of her husband, as her maid, who is raped by Adelaide's husband. Two female protagonists' lives are intertwined into one symbol of suffering and subjugation. Yet their spirit is not broken. Their friendship, devotion to each other, is beautifully written. Crozier created authentic characters, and the setting is flawless.

Free from her husband's dictatorship, Adelaide is hesitantly exploring the possibilities of writing for the ladies' magazines as a source of income. When her first piece is accepted for publication, she is thrilled and exalted. But of course, ladies of her status are not supposed to earn money. Adelaide's family takes an umbrage and puts a lot of pressure on her to give up on writing.

Gwendolyn, the widowed elder sister, keeps all her siblings under her thumb. She is a forceful, bullying entity behind the complicated family dynamics:
"I knew Gwendolyn would consider sensitivity in this or similar matters a waste of time. My sister is brutality itself, wrapped in strait propriety".

Women of their class are supposed to be pretty ornaments. "We ladies gazed up at him with our soft faces, seated, as we were in this womanly room embroidered so prettily and curtained away from the world. The very vase on the small table, filled with what few roses and foliage could be found this time of year, gave emphasis to my domestic womanliness."

Adelaide and Sobriety venture into London, both excited and giddy with their own bravery, when they follow a nameless girl with a baby in her arms into the tunnel. They are full of good intentions but of course, the road to hell is paved with good intentions. Their interference brings on dramatic, unalterable results.

This elegantly told tale is a deeply compelling dark narrative, with brilliant protagonists.

The book cover design deserves a special mention. It depicts a family heirloom with two images, of a young woman and a much older gentleman. The roses on the desk are past their bloom, the petals getting discoloured in decay. The white rose symbolised purity and innocence in the Victorian times.
Roses in decay represent here an innocence lost. 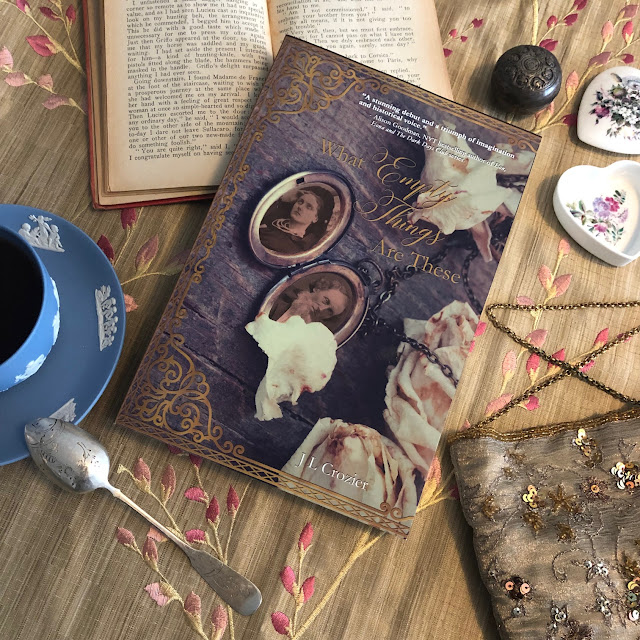