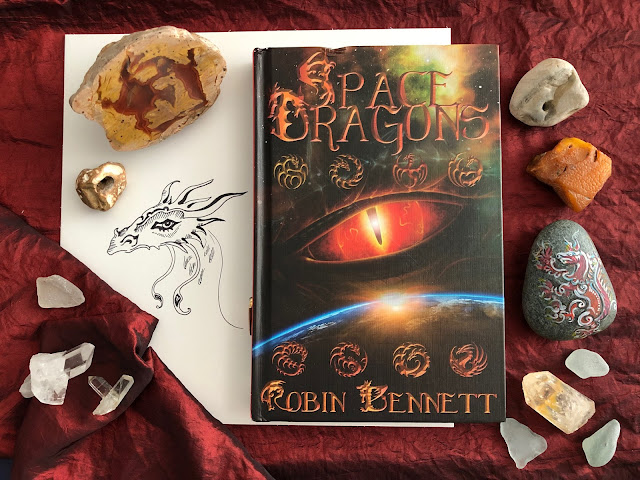 The whole universe:
every planet, star, black hole and life form
started with a single atom
exploding into a great void of nothing.

Right after that, came the Dragons.

When we were offered a chance to review Space Dragons by Robin Bennett, we immediately replied Yes!!!
A. We love books and films about dragons,
B. It's set in Oxfordshire (what could be more cool than having dragons in the neighbourhood?!)
C. We were smitten with the previous book by Robin Bennett, The Hairy Hand.
D. The publisher, Monster Books, is a local one, and we actively support local authors and publishers.
E. Did I say we love dragons?!

Stan Pollux lives with his parents and younger sister Poppy in a really old house on the edge of the village. Like most younger siblings, Poppy wants to explore her brother's room which is a forbidden territory for her. While sneakily stealing a crystal from his rock collection, she topples his most valuable possession - a super-expensive telescope - and breaks it. Understandably, Stan is extremely upset with her, while the mother takes Poppy's side.
In the evening, trying to set the telescope back up, Stan feels nervous. Everything feels creepy.
When he peers in, there is nothing but deep blackness - "it almost felt as if he was staring into a hole in Space, and as if, from the end of this long, dark tunnel, something was hiding. And waiting."
He looks again, and "an evil-looking eye, from the depths of Space, sprang open and stared back."

Prepare yourself for an adventure of a lifetime, as Stan gets kidnapped by the Planet Dragon Mercury. Suddenly the school bullies and Poppy's misdemeanour seem rather small and less significant.
Stan finds himself in an alternative universe, populated by the Space Dragons.
As Mercury tells Stan, at the beginning of humankind the dragons - Venus, Saturn, Mars, Mercury etc - were worshipped as gods. Until the day when the Titans came back from the far reaches of the universe, and the fight began over the prize in the Solar system, the only planet with its own life, the jewel of the system, Eden - Earth.
Now, thousands of years later, the Earth and humankind are under threat again. And Stan's sister Poppy is missing. She's been kidnapped by Pluto (Hades) as unknowingly to herself, she's got the most coveted prize of all - the Particle of Light. Stan is determined to save his sister and prevent the destruction of the Solar System.
Will Stan be able to rescue his sister and save the world?!

We were glued to the story from start to finish. What a terrifying sci-fi adventure with an unusual but very likable super-hero!

You will need to know your Greek & Roman myths pretty well to appreciate all the nuances of the story and the references to the ancient myths. It would help if you know who the Titans, Hades, Cerberus, Hercules etc are. Thankfully, we've been recently reading a book of Greek myths after watching Atlantis and Olympus. Even Stan's family name Pollux is an allusion to the Dioscuri brothers Castor and Pollux.

Just like The Hairy Hand, Space Dragons' book design deserves a special mention.
The sturdy cover with a striking image of a fiery eye grabs your attention immediately. There is a tiny metal pendant on the spine, which is a great detail.
The illustrations in the book are an eclectic mix of styles and help carry the storyline organically, adding all in all to the other-worldly atmosphere.

A magical and thrilling story, highly original, Space Dragons is a compelling read. This part fantasy, part mythical adventure, conjures up the deep bond between the past and the present.


About Robin Bennett:
Robin Bennett is an author and entrepreneur who has written several books for children, adults and everything in between. Listed in the Who's Who of British Business Excellence at 29, his 2016 documentary "Fantastic Britain", about the British obsession with fantasy and folklore, won best foreign feature at the Hollywood International Independent Documentary Awards, and his first book for young adults, Picus the Thief, won the Writers' News Indie Published Book of the Year Award in 2012. Robin is also a director at Firefly Press.

Many thanks to Robin Bennett, Monster Books and Rachel's Random Resources for our copy of the book!

This blog review is part of the blog tour, you can check out the other reviews here: 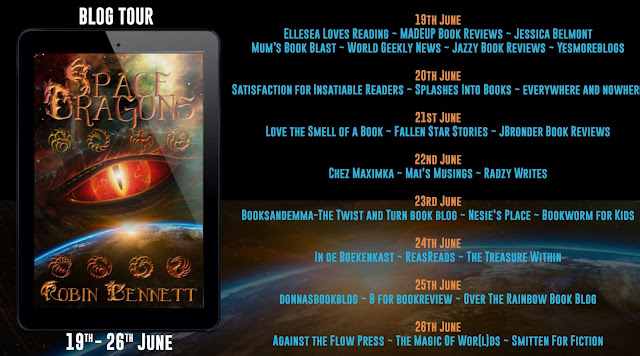 Giveaway:
If you like the sound of this book, you have a chance of winning one of 10 hardcover copies of Space Dragons by Robin Bennett.
T&Cs:
The giveaway is open to the UK residents only.
It might be run on several blogs, i.e. it's not exclusive to Chez Maximka blog, and I have no responsibility for the selection of the winner or dispatch and delivery of the prize.
Please enter using the Rafflecopter box below.
The winner will be selected via Rafflecopter from all valid entries and will be notified by Twitter, and/or email.
If no response is received within 7 days, then Rachel's Random Resources reserves the right to select an alternative winner.
Open to all entrants aged 18 years or over.
Any personal data given as part of the competition entry is used for this purpose only and will not be shared with third parties, with the exception of the winners' information.
This will be passed to the giveaway organiser and used only for fulfillment of the prize, after which time Rachel's Random Resources will delete the data. 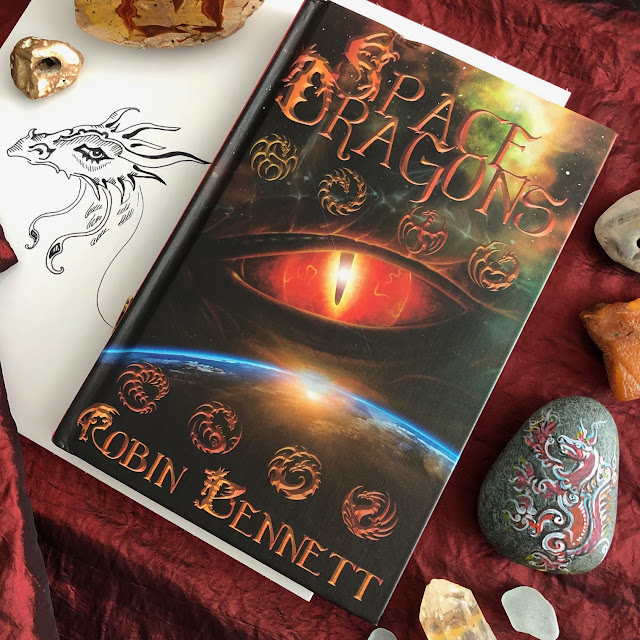