When you mention books about governesses, which books and characters spring to mind? Jane Eyre, Agnes Grey, Linda from Nine Coaches Waiting...

The Earl's Runaway Governess by Catherine Tinley is a charming romance story, with sparks flying all the way.

Marianne Grant loses her parents and freedom at the same time. Her loathsome stepbrother Henry is appointed as her guardian.
In order to avoid his lecherous advances, she flees the only home she knows for the anonymity of London. She is lucky to find a position of a governess (a miracle in itself, as she has no references). She acquires a new identity and invents a new backstory. Some details of her story are similar to her real background (i.e. she is recently bereaved), some are far from truth (she has to lie in order to cover her tracks as she is terrified her step-brother might find her).

She meets her new employer, Earl of Kingswood, known as Ash to his friends. He appears brusque and unfriendly (rather like Mr Darcy). New responsibilities imposed on him by his cousin's will cause his great resentment. He never wanted the title or the big country manor, with all the ensuing powers and duties. He is a London buck who very much enjoys the ton and his circle of friends.

Gradually there develops a friendship between the two. There is also an underlying chemistry, but both are wary of their social standing and the impossibility of a liaison. Marianne feels attracted to him and wants to confide but doesn't dare, especially when she comes to a mistaken conclusion.

Marianne, or Miss Bolton, as she is known to everyone at Ledbury House including her charge, Lady Cecily and her mother Fanny, enjoys her job. Due to her upbringing, she knows how to run a house, hire personnel and deal with the staff much better than the empty-headed Fanny. But, of course, as a governess, she needs to keep quiet and not presume that the others might want her opinion on the matter. She often forgets her place though, which irritates and amuses Ash in equal measure.

"One of the benefits, she thought wryly, of being a governess was that she was, in a sense, a nonentity. The servants did not presume to question her, as she was above their touch, and the family did not question her as she was below theirs. She sat perfectly in the shadow world between upstairs and downstairs, free to move across both worlds, yet not fully belonging in either."

Ledbury House proves to be a satisfying challenge to both Marianne and Ash. There is so much to discover about the manor house, its gardens, grounds, tenants.
For me the most fascinating part of the story was the world of downstairs, on how the manor house functions, all the politics of hiring and managing the staff etc.

I had some minor issues with the romantic side. I know it is almost a prerogative of a romance genre that a heroine gets breathless as soon as she meets an eye candy like a Lord K with his stormy blue eyes (they are always rich and very good looking). There is a whole sub-genre of Regency romance on reforming all kinds of aristocratic rakes and titled rogues, and this novel follows the tradition.

Romantic encounters sound a bit theatrical and affected.
For example, when the lord and governess are travelling by coach, it suddenly swerves, with the female hurtling towards the man.
"With a strangled groan Lord Kingswood closed a small gap between them and kissed her.
Instinctively, and quite without thought, Marianne parted her lips and returned his fire with flames of her own. He groaned again, and Marianne felt the sound reverberate through her bones. It fanned the conflagration inside her to new heights.
She was lost in sensual wonder."
It's scenes like this that I find exaggerated.

I also didn't warm to Ash. Without giving any spoilers, he is a rather flawed and troubled character.

There is a good amount of supporting characters, who are individual and provide a compelling background to the unrolling love story.
Mrs Gray, the owner of the agency who offers a job to Marianne, is a strong personality. "A woman in business could face many obstacles..." She is wise and shrewd, and knows how to operate a business.
Now she is a character I'd like to find out more about, she deserves a separate story.

Mrs Bailey, the housekeeper at Marianne's old home is another endearing character.

Lady Cecily, Marianne's charge, is developing a personality of her own.
Even her mother Fanny is not one-dimensional. She is a vain and silly lady, but she is a product of her times. Like many women of her class at that period, she doesn't have many options but marry well. When her husband dies, she has to cope with losing her home. Her daughter gets a guardian who doesn't know her at all to start with.
No wonder Fanny wants the governess to teach her child how to be graceful and accomplished but not too clever so as not to scare a potential spouse material. Fast forward 200 years, we might live in a more educated era, and women have certainly many more opportunities, but many men are still feeling threatened by clever women.

The plot is enjoyable, with a few surprise twists. The book is written in a style that evokes the historical period it is set in.

Author Bio:
Catherine Tinley writes Regency love stories for Harlequin Mills & Boon. She has loved reading and writing since childhood, and has a particular fondness for love, romance, and happy endings.
After a career encompassing speech & language therapy, NHS management, maternity campaigning and being President of a charity, she now works in Sure Start.
She lives in Ireland with her husband, children, and dog.


Disclosure: Many thanks to Catherine Tilney and Rachel's Random Resources for the e-copy of the book for the purposes of reviewing as part of the blog tour.
All the blog stops are listed below: 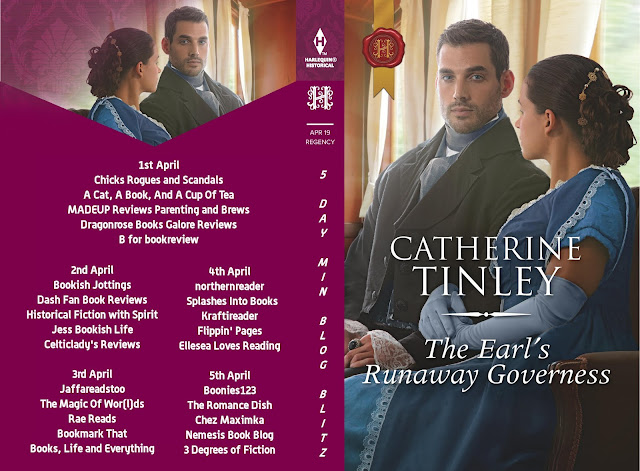