Spring is in the air: the flowers are blooming in full force. But the last week also showed just how unpredictable the British weather is. It was much colder than the previous week, with a threat of snow. We had a bit of sleet our way, but no real snow, thanks goodness.
A week later after the clock change, I am still not adapted to it. I detest the clock change, it's always a real pain for me, and I don't see any advantages.

It being a Mother's day on Sunday, I was woken up with a cup of tea in bed. Now that's the first one in my life, it was Eddie's idea. Of course, they disposed of a tea bag in the bathroom, missing the target and splattering the white bin top. And who had to clean the stain later? Happy Mother's day.

More butterflies visiting our garden. Don't know if it's the same one I snapped last week. My knowledge of insects is abysmal, I have no idea what the life span of a butterfly is supposed to be.
I suppose, Google is my friend. And if you're as clueless as I am, I've just googled, and the peacock butterfly can live up to 11 months. So it might as well be the same one who was dancing in our garden a week before. 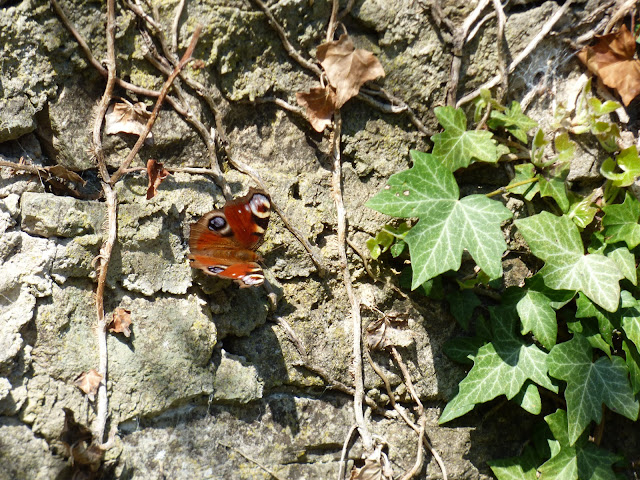 With bees getting extinct at a scary rate, I'm always pleased to see them buzzing around in my garden. There are not as many yet as there should be later in the year, when rhododenrons and lavender will start to bloom. Then the garden will be as busy as a Michelin restaurant. 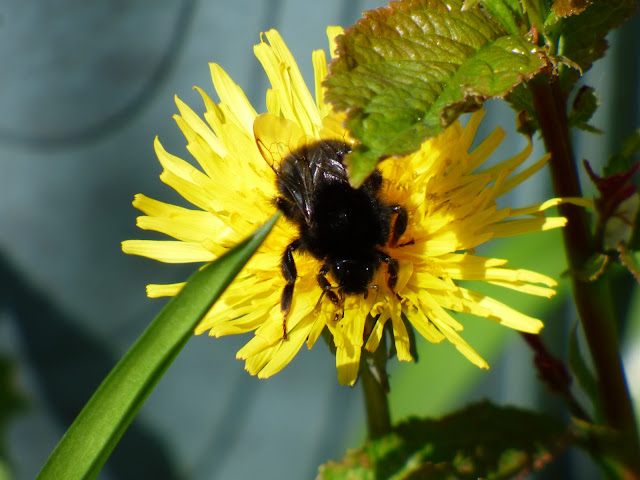 Being an unnatural woman as I am, I hate shoe-shopping, but with the weather getting warmer, I won't be able to run around in boots for much longer, and I needed a pair of new shoes.
I bought the first pair which seemed to be comfy at Charles Clincard (I had a £11 off voucher). 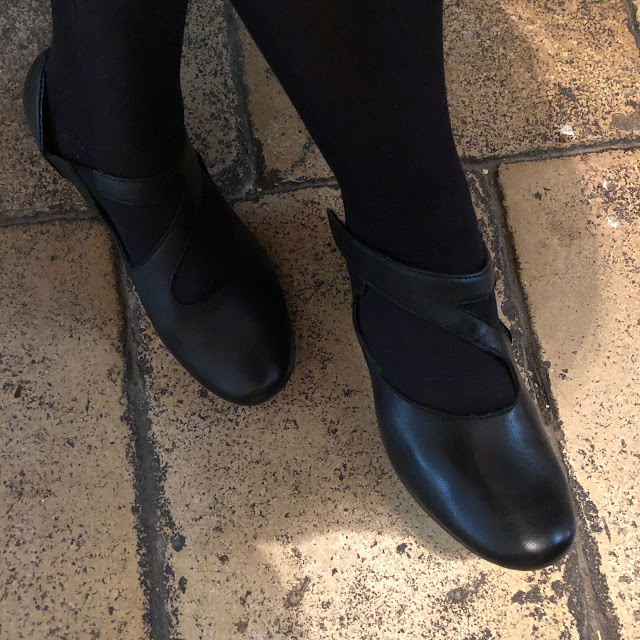 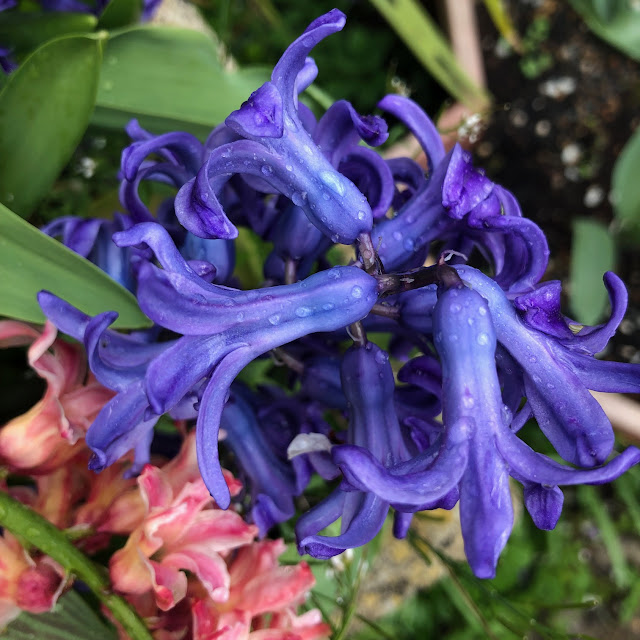 On Thursday Eddie's school held an Easter service at St Mary's church, and I tagged along.
The children were good. Alas, there was one parent next to us, with a 2-year old child who kept shouting and screaming, and talking non-stop. The mother was totally oblivious that her child was ruining the service for children who have been rehearsing the performance for many days.

I took a photo of the spire in the puddle, as I was running to the service.

It was Sasha's respite night. Originally our plan was to go to Oxford, but when I met Eddie after school, it was raining and so cold, we decided to stay at home and order a pizza.
We watched Merlin (episode 1). Last year we binge-watched all 5 seasons, and miss it, but I don't think I'm ready to go through it again. At least not yet. 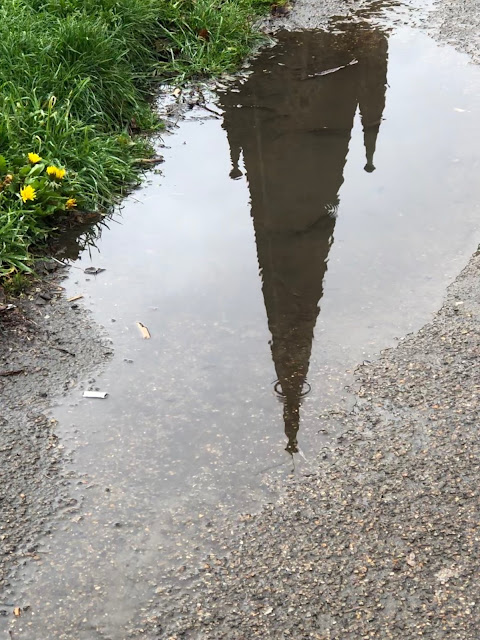 Worried about the forecasted sleet, I have covered the potted tulips and hyacinths with old bed sheets torn into pieces. On Friday I took them off, and let them dry on the hazel tree.
Eddie and I agreed that it looked like a ghost playing football (it wasn't me who placed a football there). 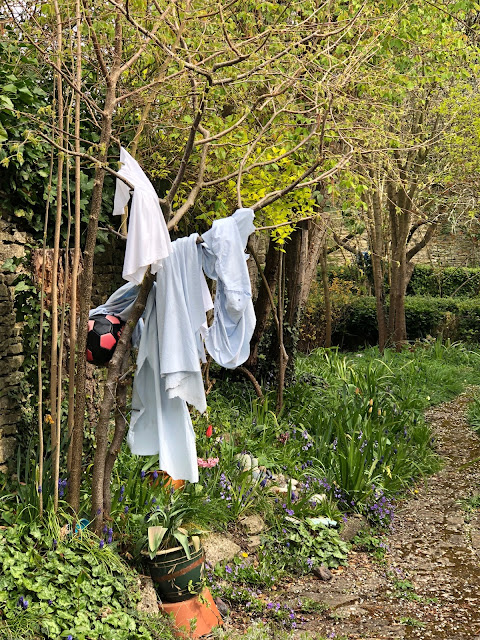 Food delivery today from Ocado - with lots of Easter eggs and a Colomba cake, all stored in the summerhouse for now, away from any temptation.
I don't know if I am going to buy more. Heston's Chocolate Teapot looks very pretty, but costs £20, and I wasn't overly impressed with his Easter eggs in the last years. They always look the part, but are not necessarily that tasty.
What Easter eggs are you buying this year? 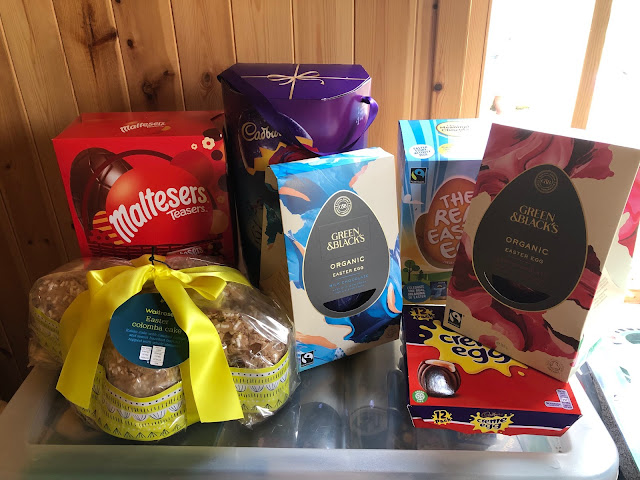 You are invited to the Inlinkz link party!
Click here to enter
Posted by Galina Varese at 15:12:00