Many years ago, when I studied English literature at the University, I wrote my thesis on Mary Stewart's historical trilogy about Merlin. I've recently revisited the Dark Ages in Britannia after the fall of the Roman Empire, while reading an absorbing novel set in 455AD.

The Saxon Wolves by Penny Ingham is a gripping blend of history and mythology.
Penny Ingham is a master storyteller who weaves a tapestry of historical facts with fiction and myths.
Her retelling of the stories first narrated by Bede, Nennius and Geoffrey of Monmouth is vivid and striking. You feel transported back to the Dark Ages.

The Saxon Wolves is set in Britain 455AD, after the fall of the Roman Empire.
Anya is the daughter of a Saxon king who's been trained as a healer and a priestess since an early age. Compassionate and sensitive, she attends to the wounds of the prisoners with the same care she treats her younger sister (who appears to have a condition like autism, though obviously it is not mentioned in the book).
She is also a visionary, haunted by chilling dreams which she is not able to interpret.
Her life of privilege comes to an abrupt end when she dares to confront the high priest against the merciless human sacrifice.
Banished from Germania as a punishment, Anya travels to Britannia with her older brothers, Hengist and Horsa. Two brothers are completely different. While Hengist is a revengeful brute with no consideration for human life, Horsa just wants to settle down with his beautiful bride.

Britannia is in chaos. There are still lots of signs of the Roman empire, but the country is torn and left unprotected, as the rival kingdoms vie for power.

Vortigern was possibly one of the most infamous warlords of Britain. The historians do contest his existence but the Father of English History Bede the Venerable writes about the proud tyrant who invited the Saxons, under Hengist and his brother Horsa into Britain as mercenaries to help fight the Scots and Picts.

Vortigern, of course, features quite extensively in the Arthurian legends and fiction. The classic sources mention that Vortigern got smitten by Hengist's daughter Rowena, and offered a big part of his kingdom to the Saxons in exchange for Rowena's hand.

In Penny Ingham's novel he becomes obsessed with spirited Anya. Her elder brother Hengist is happy to secure his position in Britannia by offering Anya to Vortigern.

On the way to Aquae Sulis, Anya and her guards are ambushed by the Irish slave raiders. She is captured to be sold to the highest bidder. On the way to Ireland, their ship is destroyed by a storm. Anya is the only survivor of the shipwreck, finding herself on the shores outside Tintagel (another important landmark of the Arthurian legends).

Anya must learn how to survive among the people who treat her with suspicion and mistrust.
Will she be able to find a new home in Britannia?

The Saxon Wolves is thronged with drama, political intrigues of the times and historical period detail. Penny Ingham brings alive a remote historical epoch. Not to be missed by the fans of historical fiction.


Due to the nature of the historical background this book might contain possible triggers like human sacrifice (a distressing scene with quite graphic details), murder (including of children) etc. 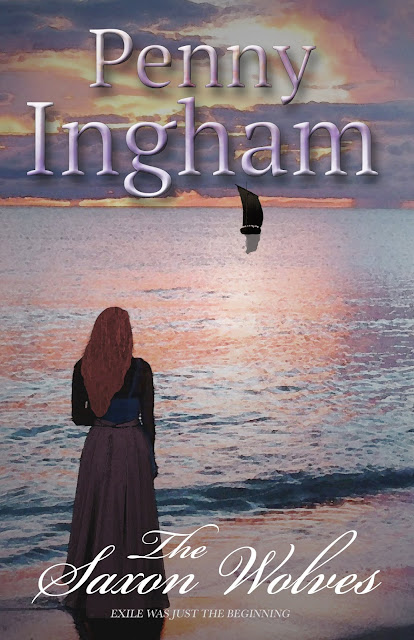 Author's Bio:
Penny's father, a journalist, instilled her with a love of history from an early age. Family holidays invariably included an invigorating walk up an Iron Age hill-fort whilst listening to his stirring stories of the Roman attack and the valiant defence by the Britons. Consequently, Penny has a degree in Classics and a passion for history and archaeology. She has enjoyed a varied career, including BBC production assistant, theatre, PR and journalism, but her ambition was always to write historical fiction. Her first novel, The Kind's Daughter, was awarded Editor's Choice by the Historical Novel Society. Penny has worked on many archaeological excavations, and these digs and their evocative finds often provide the inspiration of her books.
Penny's research also takes her to the many spectacular historical sites featured in this novel, including Hadrian's Wall and Tintagel.

You can find more about the author checking out these links:
pennyingham.wordpress.com
https://www.facebook.com/TheSaxonWolves
@pennyingham on Twitter

This review is part of the blog tour.

Disclosure: Thank you to Nerthus Publishing and Rachel's Random Resources for a free ecopy of the book.
Posted by Galina Varese at 00:10:00