I am a busy Mum, and there are days when I'm feeling totally exhausted and overwhelmed by the dietary demands and wishes of my family. And yes, there are moments when I feel like throwing a tantrum and refusing to cook. Sounds familiar?
I was very curious to discover a new cook book which evangelizes weekly meal plans and batch cooking.
The MamaBake Book (HarperCollins, published 22 February 2018, £12.99) professes to be no ordinary cookbook. It claims to revolutionise the way we prepare family meals - "once you try the MamaBake way you will never look back!" 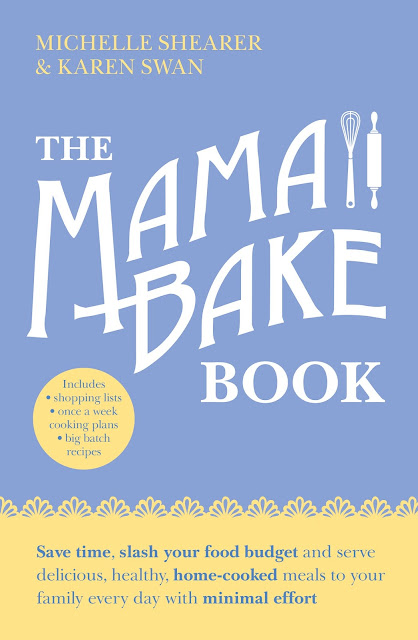 I'm mistrustful by nature when any big claims are made, but I'm also open to new ideas and happy to be converted.

MamaBake movement and cook book are the brainchild of two mothers - Michelle Shearer and Karen Swan. It was Michelle who founded their community in 2010, with the grassroots cooking club and a meeting place for young mums who would cook meals in batches, then share and swap their prepared meals to take back home a week's worth of food enough to feed a family.
This big batch cooking granted them free time during the week.

I had to smile, when I read about "mothers united in their passion to free up women from the unending pressures of domestic burden through the power of The Sisterhood".
It reads like a revolutionary pamphlet, rather idealistic.

Take me: I love cooking, and wouldn't dream of not cooking for a whole week. Yes, it is a burden at times, and I do moan about it, but half-heartedly, as basically I love cooking. In my situation it would be impossible for other mothers to cater to my family's special situation with an autistic child who would most likely not eat any of the foods cooked by someone else. But I digress...

I was intrigued as to how this book teaches you to plan meals a week in advance, make shopping lists and batch cook.
If you discard the grandiose statements about The Sisterhood and domestic burden, it is actually a clever guide on how to be more organised and adapt your cooking to make life easier.

Many things mentioned in the book make a lot of sense, like labelling containers or zip lock bags which go in the freezer. Guilty as charged: how many times I took out the container out of the freezer without a clue as to what's inside and how long it was stored there.

The MamaBake Book features many inspired once-a-week cooking plans and big batch recipes. There are over 200 recipes to choose from.
The book would better suit a non-vegetarin/vegan family. There is a Meat-free week menu and the vegan slow cooker menu, but I would say the majority of recipes are for meat-eaters.
Some weeks' menus include meat on an almost daily basis.

The book conveniently offers shopping lists which include everything you will need to cook meals for a week. The once-a-week plans include seven different recipes with step-by-step of prep and cooking.

It is an inspiring concept. And while I don't think I'm ready yet to do a week's worth of meals in one go, I might just try to batch-cook more often and freeze (and label!!!) the meals.

I would have liked to see illustrations of at least some of the recipes. For me photos and/or illustrations are the main magnet to cook books. The MamaBake book is free from illustrations.

There were quite a few of recipes I have bookmarked, for example, Vegetable & bean pie with polenta crust, Greek honey biscuits, potato pizzas, pumpkin falafel & flatbreads and more.

One of the recipes I have tried already - and which we loved - is Pumpkin & Ricotta Cannelloni. 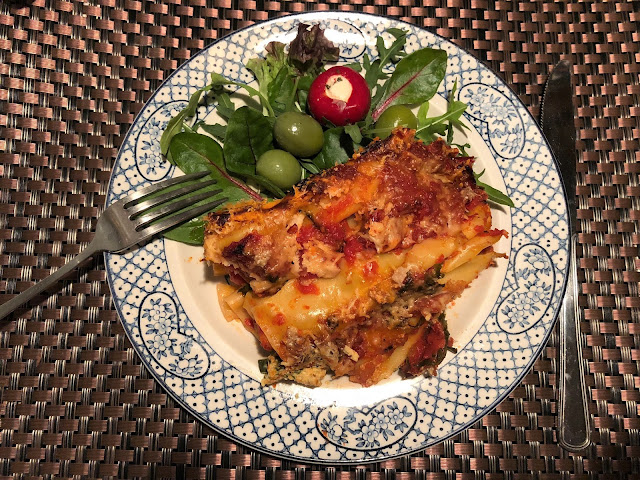 Method:
1. Preheat the oven to 180C. Lightly grease a ceramic baking dish.
2.Drizzle the pumpkin with the oil and roast in the dish until tender, about 45 minutes. Transfer to a bowl and mash. Set aside to cool.
3. To make the sauce, place a medium-sized saucepan over high heat and add the tinned tomatoes and half the basil leaves. Season, to taste. Bring to the boil then reduce to a simmer and cook until reduced by one-third, about 10-15 minutes. Remove from the heat.
4. In a large bowl, mix the ricotta, mozzarella, egg, spinach and mashed pumpkin. Season with salt and pepper, to taste.
5. Lay out the pasta sheets and place 2tbsp of the pumpkin mixture in the base of each sheet and roll up into a tube. Lay each cannelloni in the baking dish. Top with the prepared sauce and grated parmesan.
6. Bake for 30 minutes, then cover with foil and bake for further 15 minutes.

Serve with a fresh green salad. 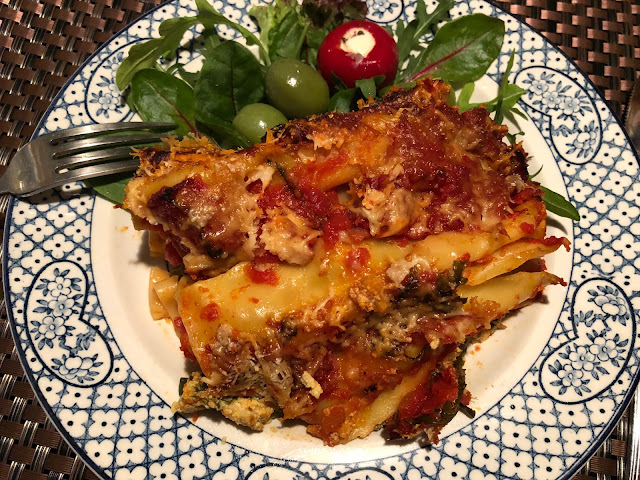 Allow to cool completely before chilling or freezing. The cannelloni will keep for 1 week in the fridge or 2 months in the freezer.
If cooking from frozen, defrost overnight in the fridge. Cover with foil and bake in a 180C oven for 30 minutes until thoroughly reheated.

Disclosure: I received the MamaBake Book for the purposes of reviewing. All opinions are my own.
Posted by Galina Varese at 20:46:00