You might have been wondering why I went quiet again last week, since I said I was going to catch up on my blog a week ago. Unfortunately, we had a rather stressful week, with one disaster after another. OK, perhaps not a disaster in the full sense of the world, but it was enough of a disruption in our personal lives.
Since we have changed our boiler over a month ago, we started having problems with drainage.
I don't know if that's something to do with the cowboys who installed our boiler, or whether it was a coincidence.
A few days ago the ceiling in the hall started dripping rusty water. In panic, we began calling one plumber service after another. Finally someone agreed to come and look at it.
This was the company called Rightio. I should have been wary of anyone calling themselves Rightio.
We were told to expect a plumber between 11am and 2pm on Thursday, I waited all that time downstairs, not even daring to wash the dishes in the kitchen in case I wouldn't hear when they knock at the door. The guy finally made his appearance at 6pm. We went upstairs, trying to figure out exactly where the leak was coming from.
The engineer lifted a few floorboards, which were not fixed properly since the last time they were lifted for the new pipes for the boiler. He complained that they were screwed the wrong way, that he couldn't access the leak and suggested cutting out the hole in the ceiling on the ground floor.
I said No, we don't destroy the ceiling. Imagine how much would that cost to repair. He shrugged it off, saying we should claim the home insurance. As if that was just plain sailing. His lovely note says: "Advised customer that inspection holes are needed to trace leak source. They do not wish me to proceed with this action".
That sounds like a joke.
Can you guess how much this joke cost us? £118.80. For doing exactly nothing.
Our coneversation went as following:
- I'm going to charge you for an hour.
- But you've been here for about 20 minutes.
- It doesn't matter if I stayed for 5 minutes or an hour, we still charge for an hour.
- But you didn't fix the problem, it is still leaking non-stop, and we need to call another plumber to fix it.
- You still need to pay for an hour.

That's Rightio for you. I know who I would never call again for any service.

Back to square one. This time we called the British Gas. The plumber arrived in the arranged slot, lifted more floorboards, found the leak.
Apparently, when the cowboy who did our boiler put the floorboards back, he screwed the screw into the pipe. It was kind of sealed for a few weeks, but because we walked over it, the screw has loosened, the hole in the pipe widened and started leaking.
He repaired the pipe. And no holes in the ceiling were necessary. Do you hear that, Rightio engineer?

On top of that, the drain is still blocked, so every morning we have a mini-pool outside the back door going in the garden. A very smelly pool.

And to make it even more stressful the wall at the rear of the garden has partially collapsed. It is an old wall, with what used to be a door into the farm fields. At the moment, the side over the wall is a completely overgrown land, with trees and brambles. You cannot get through, it all needs clearing out. The trees on the other side push at the wall. We're waiting for the district councillors to get back to us, as to who owns that plot, and tomorrow someone will come to look at the wall and give us a quote as to how much it will cost to repair.
Aaaaannnd breathe... 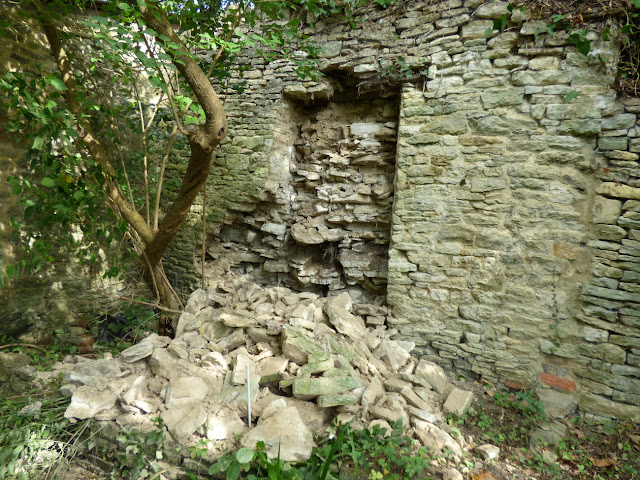 I'm rather glad the week is over.