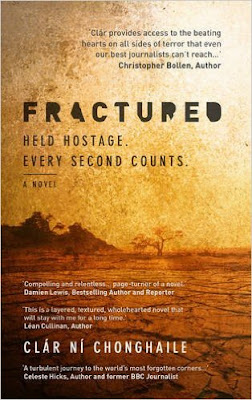 When this novel literally dropped at my doorstep, my first thought  was Oh No, it's not my genre at all. I don't do modern politics in fiction (well, I do, but only rarely). And if I saw this book in the bookshop, I would most likely not pick it up. And that would have been a mistake.
Fractured by Clar Ni Chonghaile is a fascinating debut novel. Clar has worked as a journalist for over twenty years, and travelled extensively. Somalia was one of her the countries she worked in.
The novel starts abruptly, narrated by Peter Maquire, a journalist who is kidnapped and held hostage in Somalia. His existence in captivity is bleak. To escape his tomb mentally, Peter tries to travel back in time and remember the smallest details of his life before captivity. He knows that most likely he won't leave this place alive and will never be able to redress the wrongs of his life before the kidnapping.

Then as suddenly, the thread of narrative is picked by Abdi, a young Somalian, who is guarding Peter. He had to grow up fast, and he has witnessed a lot of atrocities and horrors happening in his homeland. Though he is on the side of the kidnappers, he is as much a victim of the situation as Peter. His life choices are limited, to survive he has to join a terrorist group. Working with the captors, he nonetheless strikes up a friendship with Peter, and decides to help him escape the captivity. Both men set off on a dangerous journey.

And then there is Nina, Peter's mother. She goes through the hell of her own. Unable to wait for the news of her son's release in Paris, she travels to Somalia. She is a former journalist herself, and has her own skeletons in the closet.

Each narrative is in first person. The fragments of their lives come together, interwoven and linked by the events of the past and present. In some way or another they are all prisoners, of circumstances and past.
Each of them is indeed fractured.

Clar Ni Chonghaile has created a bleak and convincing story. Her writing is precise and informative.
This is one of the books which makes you think about it , even after you closed the book on the last page..

Just earlier this week my husband had his article published in the German newspaper, where he talks about the organised crime and cinema, and how the mafia mimics the movies. I even read the following quote aloud to him, saying that it's very similar to what he said in his article:
"My guard pushed me inside, as though I had any resistance left, or anywhere else to go. I almost laughed at this cliched gesture. Sometimes, I think we have all watched so many movies that we have no originality left. We mimic the screen, while we think it mimics us (my italics, GV.) He locked the door and left me to my trivial thoughts" (page 16).

This is a topical and at the same time timeless in its philosophical approach novel.

Disclosure: I received this book for the purposes of reviewing. All opinions are mine.
Posted by Galina Varese at 17:42:00