Above All Things by Tanis Rideout (review with a lyrical ingress)

Above All Things is a debut novel by Tanis Rideout. It is a moving work of fiction, skillfully narrated. It has been enthusiastically received as BritMums' Book Club choice for April. I don't join in every time a new book is selected, as most of choices are not what I would have bought or picked in the library myself. 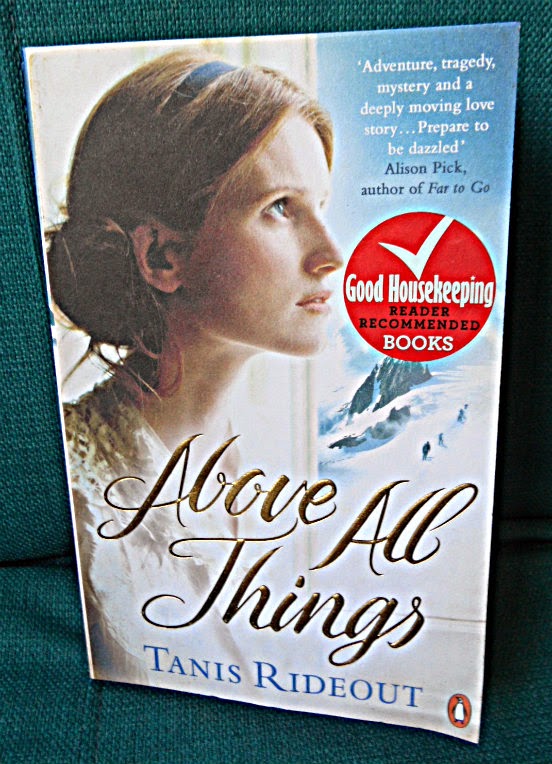 I have applied for a free copy of Above All Things, thinking of my Mum. She has always been an avid reader of books about explorers and discoveries. When she was young, she was dreaming of the faraway lands and expeditions. Not me. I had dreams of being a ballet dancer or an actress, but these were only dreams, I wasn't brave enough to pursue them. When I was about 10 years old, I was invited to spend a couple of weeks with a group of children of my age who were the pupils at the ballet school. I was supposed to observe them and do sketches for the TV programme. I was enthralled but also shocked by what I've seen. The harsh looking teacher, in her turn, was observing me and asked if I would like to enrol in their school, as apparently I had the "right" face, neck and body for ballet. I was flattered but refused. I didn't fancy going to the boarding school for any glimmer of glamour. The Russian ballet school means business, and it is very tough. Anyway, I am completely digressing from the book I am supposed to review.

I didn't read it in one go. In fact, I started reading it, then stopped and returned to it reluctantly a couple of weeks later. Then I had another break from the book. Not because the book isn't well written, no, it's the subject that I didn't find very appealing. I'm sure my Mum would have read it with great interest.
I tried to spur my enthusiasm, looking at the old photos of George and Ruth Mallory, the main protagonists of the book. I have looked them up on Wikipedia.
It is very rarely that I don't finish a book, and I was surprised at myself for being so reluctant to read this novel. Especially that everyone else seemed to be raving about it on BritMums. But I have to say that I didn't enjoy it. Not because I already knew what was going to happen to Mallory. After all, I read a lot of history books, where I know the events perfectly well, but somehow I didn't feel involved enough. Or perhaps a subject of an absent husband who has all his freedom is a bit too close for comfort.

The reader is transported back to the 1920s to the slopes of Mount Everest, a dangerous, treacherous and indifferent deity of a mountain which doesn't want to be conquered. George Mallory is obsessed with it. The story narrates the events of his third and last attempt to climb Mount Everest. He is determined to conquer, and this desire takes over and dominates his life. The bloody mountain has always come between him and his wife Ruth, and she surely resents that. She knows when there is a choice between her and the mountain, the mountain always wins. And that hurts. George is handsome and charismatic but he is not a family man. His obsession with reaching the summit of Everest borders on selfishness and egoism in the name of the glory for the country.
Ruth, left behind to hold the fort and look after three children (whose births were all missed by the father), is torn between her admiration and love for George and a deep resentment for being always second-best when compared to the mountain.


Nothing has much changed since then. Men climb and climb, women wait and wait.
Posted by Galina Varese at 10:34:00