"Well, this will be a wedding to remember, won't it?"

A Ration Book Wedding by Jean Fullerton is a war time romance, set during the Blitz in London's East End.

It is the fourth book in the East End Ration Book series, and the second one I've read by the author (see my review for A Ration Book Childhood). It is a family saga, following the lives of the Brogan family, and their close friends.
It can be read as a standalone, but you might appreciate the family dynamics more, if you've met the main characters in the previous books, and know what's happened before.

While Ida Brogan and her husband Jerimiah make their appearances in the latest book in the series, it is centered more around the younger generation of the Brogans, their spouses, prospective partners, and friends.
The wedding of the Brogans' daughter Jo is much anticipated by the whole Brogan clan.

Life in the Blitz continues to be perilous and traumatic. Spending the nights away from home has become a new norm. Nobody knows if their home is still there, when they return from the shelter.

Francesca Fabrino is working in the aircraft engine component, allocated to the factory when she's signed up a couple of months earlier. "The new war conscription act meant all women between the ages of eighteen and fifty, without dependants, were required to register for war work".
The work is manual, dull, repetitive and not very inspiring, so when Francesca sees an ad for the BBC Overseas Service position for a young lady who can do clerical and general duties, and is able to read and speak Italian, she jumps at the chance.

Francesca is very close to the Brogan family. When her mother died six years earlier, Ida Brogan, her best friend's Mattie's Mum had taken Francesca under her wing.
In 1942 Mattie is married with a child, and another one on the way. And Francesca's old flame, Charlie, is also very much on her mind. She has been in love with him for many years, but he hasn't noticed her. And now he's married to a glamorous and vicious Stella, and they have a little boy together.

We've met Stella in the previous book in the series, she is a kind of villain you love to hate. She's extremely selfish and doesn't seem to care much about her little boy. Stella works as an exotic dancer under a moniker of Salome of the Mysterious East in a night club Bon Bon, that's where she can have an adoring crowd around her. She has always loved to be the centre of attention, and the roar of loud male voices in the club fills her with excitement. There are lots of Americans in the city, and they pay handsomely for her company.

While the Brogans know of Stella's job, they decide not to tell Charlie anything while he's away fighting for the King and the country.

Francesca must forget Charlie, but it's so hard. He's back from the North Africa, recuperating after his wound, and finds out the truth about his wife.

Her new colleague, count Leonardo D'Angelo, does  Radio Roma's evening news broadcast. Leo's handsome, debonair and charming. He is also smitten with Francesca. Will she be able to put her hopeless love for Charlie aside? Her father would be so happy if she marries Leo, but her heart is pining for Charlie. Why does the love life have to be so complicated?!

Just like the previous book in the series, A Ration Book Wedding is rich in historical detail. It has strong female protagonists who are finding their way in "a man's, man's world". The war times have brought new freedom for women, and showed the men what women are capable of.

I enjoyed this book, except for a couple of niggles regarding the plot. Without giving any spoilers, I thought that one particular twist of fate was too much of a "deux a machina", bringing a solution to something that looked pretty insoluble.

This is a real treat for fans of historical fiction, especially war time romance. Looking forward to reading more of the East End Ration series. The story drips with authenticity, the research is of high calibre. Full of drama, romance and social mores.

Many thanks to Jean Fullerton and Rachel's Random Resources for my e-copy of the book! 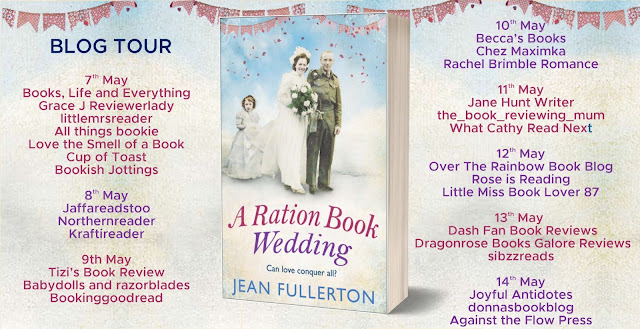 Author Bio – Jean Fullerton is the author of thirteen novels all set in East London where she was born. She also a retired district nurse and university lecturer.  She won the Harry Bowling prise in 2006 and after initially signing for two East London historical series with Orion she moved to Corvus, part of Atlantic Publishing and is halfway through her WW2 East London series featuring the Brogan family.