And one more week has whooshed by, a bit more cheerful than the last one. My Mum arrived on Tuesday, and it's wonderful to see her. Hallowe'en decorations (and Christmas gifts) seem to dominate the shops.
The weather has been pretty abysmal though, it's been raining most days, and we were watching the levels of the river Windrush with a bit of anxiety, as it's prone to flooding.

Last Sunday was no different - rain, rain, rain, with a few sunny rays in between, when I managed to snap these wet cyclamens in the garden. 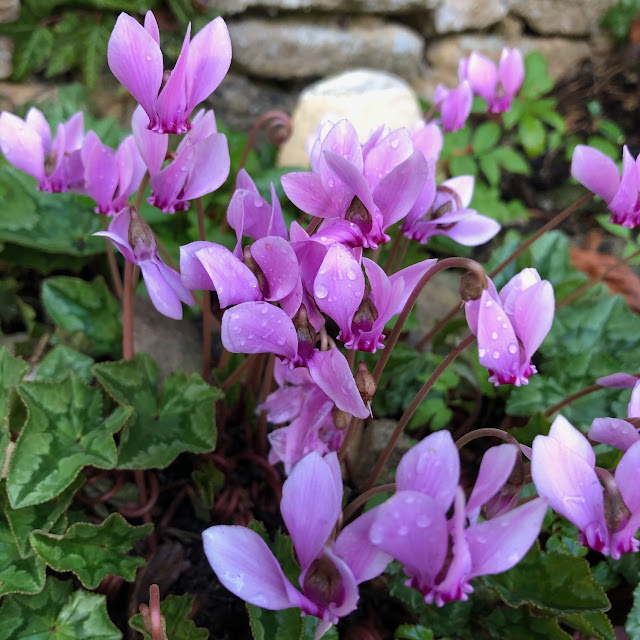 This is one of a few hazelnuts I managed to rescue before the greedy squirrel got to them. She is a total thug, biting off the hazelnuts and just throwing them on the ground, rather than taking what she needs to hide for winter. 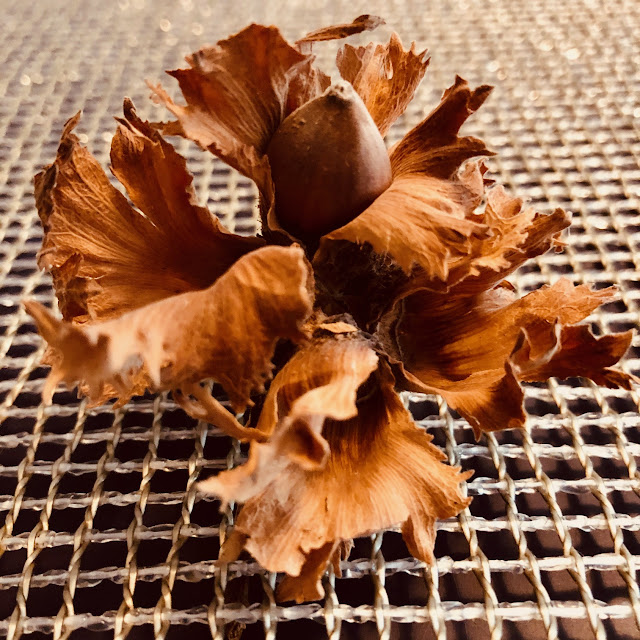 Tuesday was a super busy day. My Mum was arriving later in the evening.
Thankfully, Sash was given an extra respite day this month, so I didn't have to worry about him. My husband was also arriving from Italy in the evening, so Eddie and I were going to Heathrow to meet my Mum.
By a very lucky coincidence, a friend was taking his cousin to the airport, and offered to take us there as well. We had to leave a bit earlier.
My Mum had a good flight.
Eddie took his backpack with him, with some snacks and a Marvel comics issue. 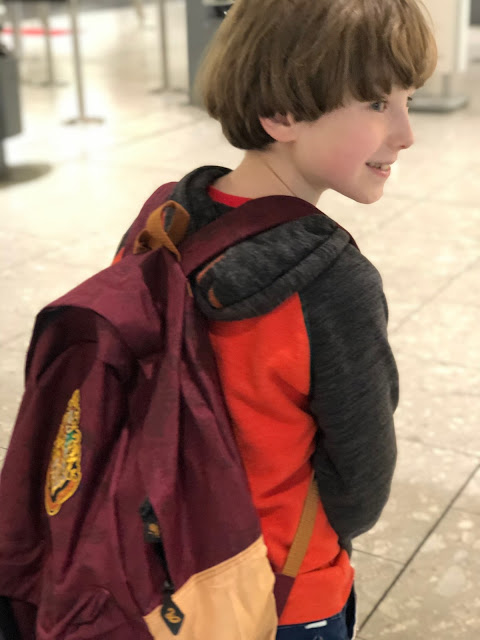 Of course, the first thing my Mum did the next day was to go in the garden and start pruning and chopping. Her strange reasoning is that since we pay for the green waste removal, we need to fill in the bin. I stopped arguing with her, she just does her own thing, and I let her be.

Eddie enjoys reading the Beast/Sea Quest series by Adam Blade. I've taken a photo of the stash he has in collection to use as a reminder on my iPhone what he's got already, in case I spot one of the books in the charity shops. 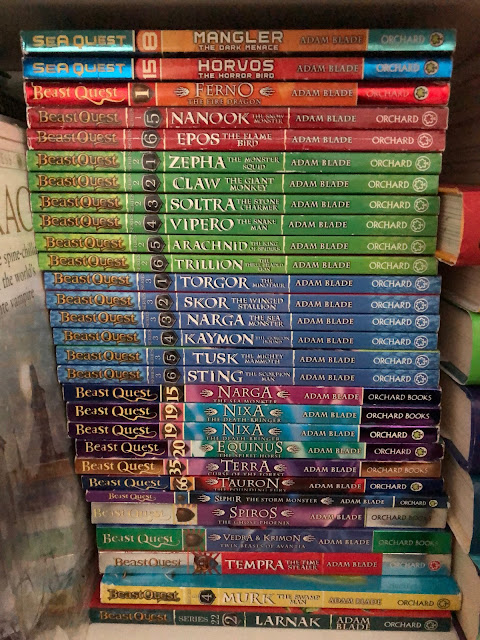 I love reading the #FolkloreThursday tweets. Every week there's a new theme, and last Thursday it was the theme of the underground/underworld.
I took a photo of my Mum's artwork. This is an illustration to the Russian folk tale The Mistress of the Copper Hill. She lives in the caves under ground, and lures the craftsmen with the precious rocks. While in her kingdom, they gain a great knowledge of rocks, but forget all about the world they left behind. This is a legend from my part of Russia - the Urals, and has been told by the writer Pavel Bazhov.
My Mum is an artist who works with the hot enamel. The paints she uses are the same as in porcelain. Each work goes in a special kiln to be treated by fire at 800C+. 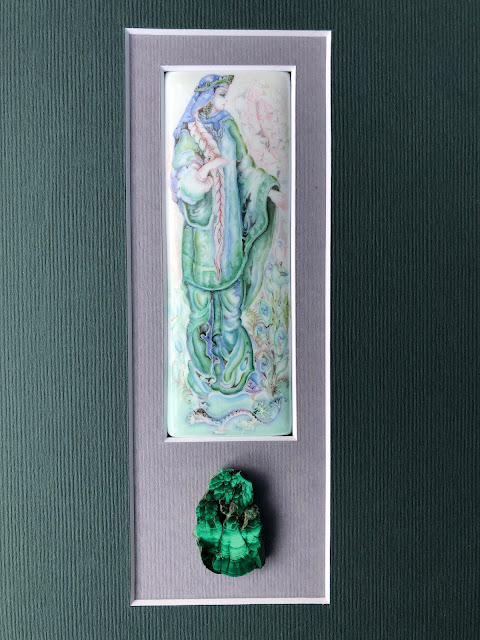 Rain has affected the water levels in the river. There was hardly any gap left under the bridge, as the water has risen. 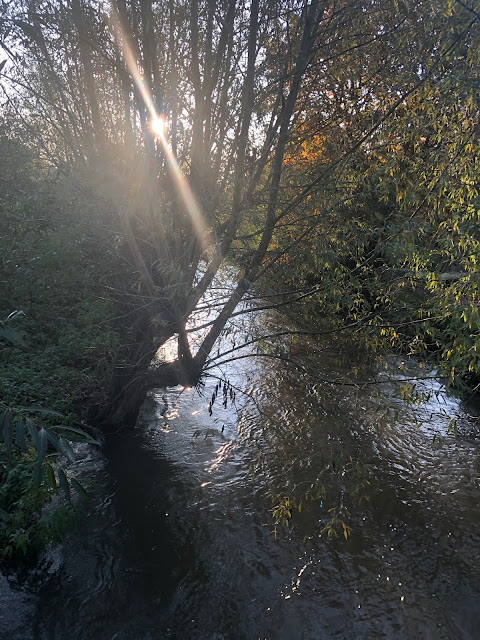 Yesterday Eddie and I were meeting friends at the playground, and walked past St Mary's Church, with its beautiful windows. 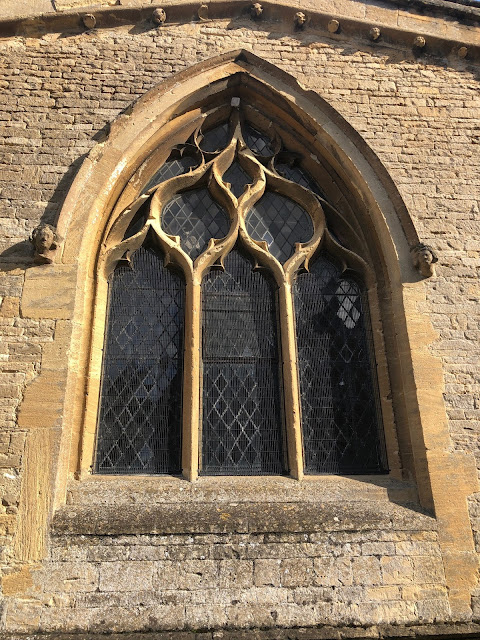 You are invited to the Inlinkz link party!
Click here to enter
Posted by Galina Varese at 11:43:00