The House by Simon Lelic

It's been a year of psychological thrillers for me, if you have a look at the list of the books I've read this year (you can see it on Good Reads). Closely followed by children's books - as I read to my younger son every evening, and ghost stories.
I did have a resolution of sorts to try to read more of classics and non-fiction, but it didn't happen. I had such a tumultuous year, dealing with family problems, including our elder son's increased anxiety as well as a mess of a married life, that reading was one of the ways of pure escapism for me.
Reading thrillers and ghost stories distracted me from the distress and unhappiness of my own life.

It's not surprising that one of the last books I've read this year was yet another thriller.

The House by Simon Lelic was one of my impulse purchases at The Works. I can never resist their 3 for £5 offers. This is a dark twisted psychological domestic drama, which shifts a narrative and perspective. 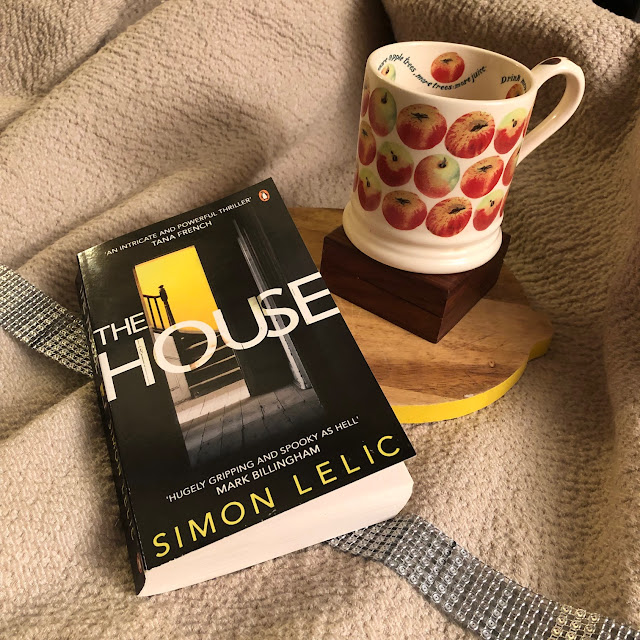 Syd and Jack narrate their story in a series of diary-type entries, as they try to process what's been happening with them. We immediately know that something has happened, as the police are stationed outside their house, and Jack is feeling twitchy.

To make some kind of logical sense of the unravelling drama, Jack and Syd go back to the day they have first seen their house. From the very fist moment Jack is uncomfortable about the whole house business, while his girlfriend is smitten with it.
They make an offer, thinking they don't have a chance. To their surprise, their offer was chosen by the owner, who moved across the world to live with a newly found love of his life and left the house with all the weird belongings to be disposed of.

Syd and Jack's relationship is multi-layered and complicated, and they are definitely not a perfect couple.
The house itself is also a stuff of nightmares. It might be located in a desired neighbourhood, but it's rundown and filled with all kinds of junk, including stuffed birds all over the house. Taking into consideration Jack's initial suspicions about the house, again, nobody would call it a perfect house.

The way the house is described at the beginning, once Syd and Jack move in, with the creepy sounds in the house, the grisly remains in the attic without windows, the mystery box belonging to a little girl, while the previous house owner didn't have any children, the cold hand touching Syd's cheek in the night, all makes you think it might be a horror or ghost story. But that perception is deceptive.
This is not a ghost or horror story, it's a psychological thriller-domestic drama. If anything is haunting in this novel, it's the past. Both Syd and Jack come from very dysfunctional families.

Jacks' parents are the epitome of the hypocritical middle class, with their materialistic aspirations and suffocating social limitations. They seem to have no love for their only child, and look upon him as a disappointment. His choice of a girlfriend is a cause of great tension and disapproval.

Syd's back story is even more complicated. Not to give away any spoilers, her family is toxic and abusive. Her father is a villain who enjoys tormenting his victims. Syd's drug addiction problems in the past make her a volatile companion, but Jack's love is a force of nature, and together they hope for a settled future together.

Jack is a social housing officer, who becomes too embroiled in his clients' lives. He doesn't think twice about committing a fraud, when trying to help the vulnerable family of refugees, whom he befriends.

Syd, on the other hand, befriends a young girl from the neighbourhood. In Elsie she sees her younger self, abused by the domineering cruel father.

Antoine de Saint-Exupery wrote in his famous book The Little Prince: "You become responsible, forever, for what you have tamed".
This line could be written about both Syd and Jack. They get involved in the other people's problems with drastic consequences.

This book explores many an ethical issue. How much do we get involved in someone's life? Do we dispense with legality when trying to help the vulnerable? How can you live with the consequences of the vigilante crime?

There are many episodes of domestic abuse and violence, and it could be triggering for some readers who have suffered it.

It's a gripping and tense psychological thriller, which will play on your mind.