Another week whooshed by, in a few days my Mum will be heading back home. I know I will miss her terribly, but it will also be a relief.
I feel such a horrible daughter, but she has a talent for doing what she thinks is right, without asking for anyone else's opinion. And when I object, I am accused of being intolerant.
Every time I come home from the school run, she's done something else in the house, which she thinks is an improvement. I really should just let her do it, and then change back when she leaves.
Arrgghh.
And breathe.

Last Sunday was the Armistice day. Eddie went to the church service in the morning with his Dad, while I stayed at home with Sasha and Mum. I don't feel confident leaving two of them together, as Mum gets rather panicky, when Sash misbehaves. So, I missed the Remembrance service in town.
Later Eddie and I went to the Church Green to look at all the poppy displays.
Witney created a poppy mile, which is an incredible display of 30,000 poppies running from the Corn Exchange down to the Leys.

Eddie's school took part in the display as well. Children brought the old photos of their ancestors who took part in WWI to school, they photocopied them and then made a collage on the models of soldiers. 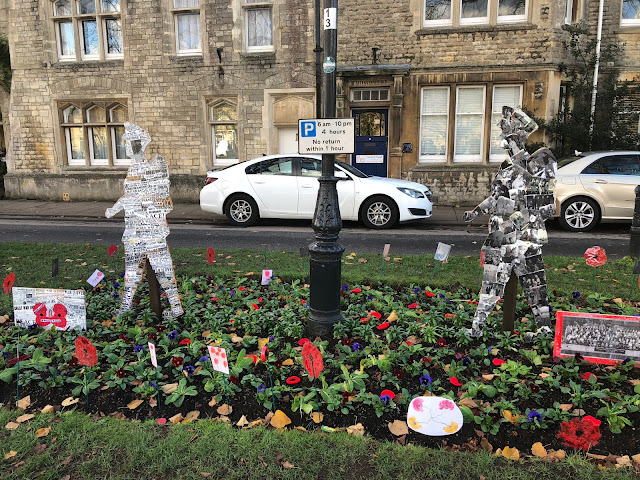 After two weeks of frustrated waiting Bensons for Beds finally delivered the missing box on Monday. The customer service there is most appalling. They were quick to take the money, but slow to do what they were supposed to do. I'm half tempted to write a post on how I will never place an order with them again.
They didn't bother with answering emails, I wasted hours trying to get through on the phone, and they were most dismissive, when I managed to talk to them. Awful, awful service.
After the delivery I got an email from them, saying they hoped I was delighted with my order.
Well, delighted would be the last word to describe how I feel about them. How about - insert a string of swear words here. 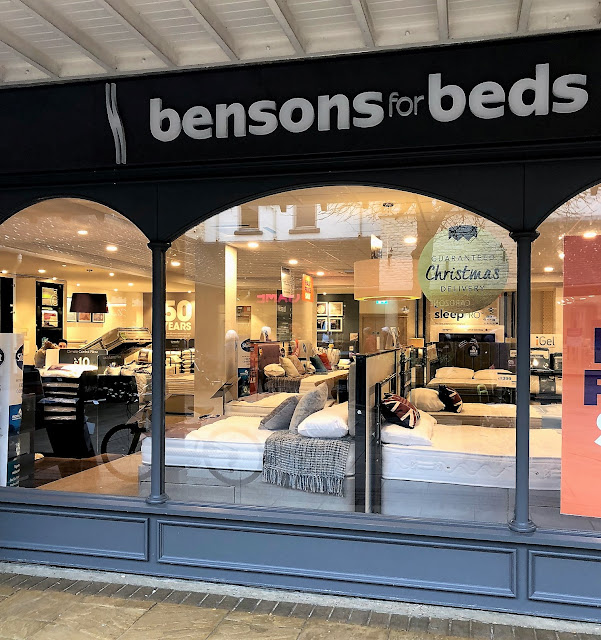 On Tuesday my husband was leaving for Colombia, and we had a quick coffee in town just after taking Eddie to school.
I had a latte, while he treated himself to a slice of banana bread with Greek yogurt and honey. Their banana bread is the best I ever had, I wish I had a recipe. It is gorgeous. 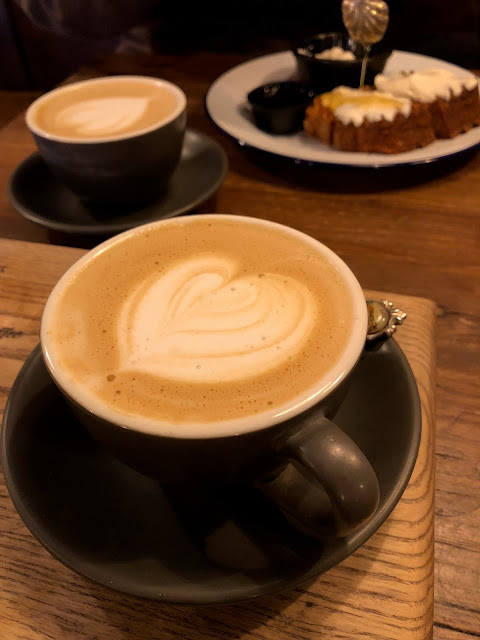 On Wednesday evening, while getting the bins out, I looked at Eddie eating ice cream in the sitting room. 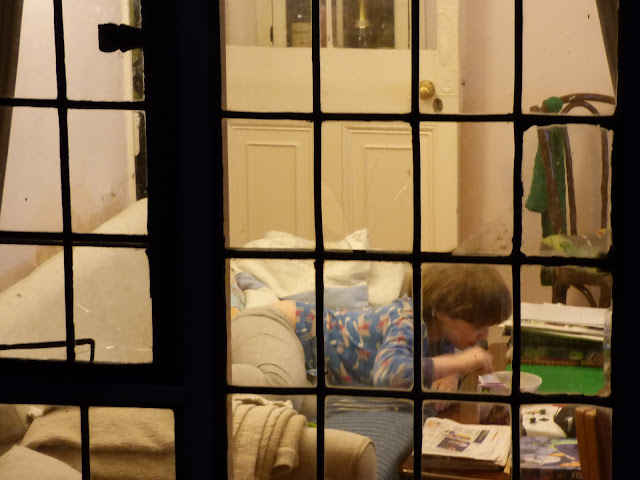 On Thursday the only photos I took were of Panjango Trumps for reviewing. The review is still to come. 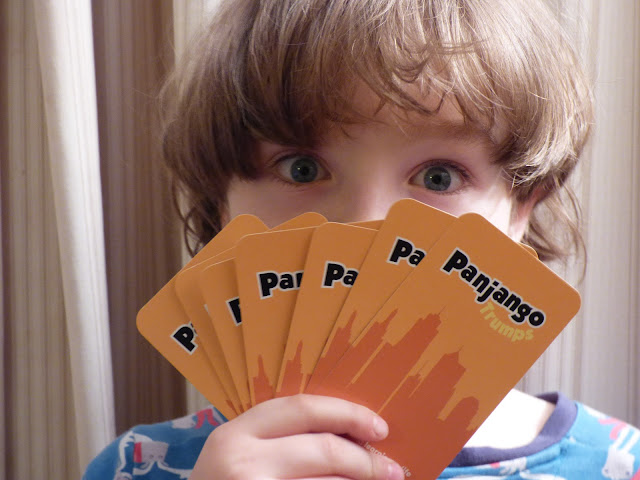 On Friday I baked some apple turnovers, as I wanted to offer something tasty, when a friend came over. 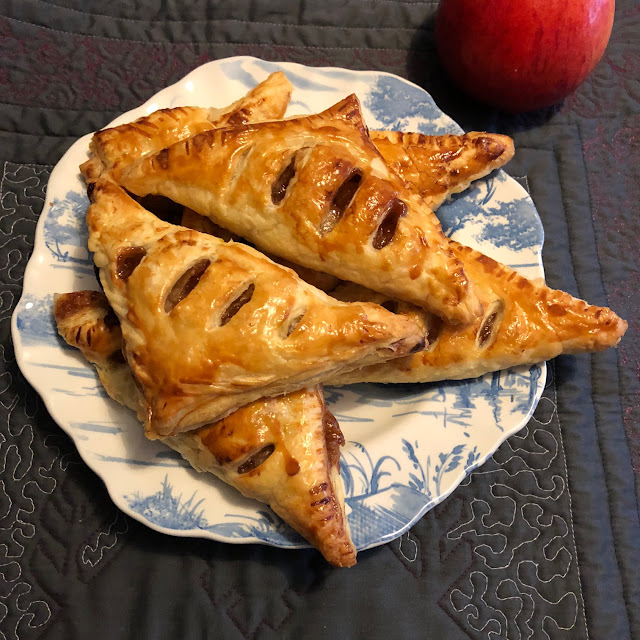 Today: not much is happening.We're just having a chilled day, not going anywhere out, as my husband is still in Colombia.
As I write, Eddie is watching The Polar Express on DVD again. He seems to be fascinated by it, while I find it thoroughly creepy. For me it's a bit like a freaky horror film rather than Christmas entertainment. And that comes from someone who enjoys Goosebumps.
I need to cut down the Virginia creeper on the front of the house, as it's grown too high, and reached the roof. There is a nest there, among the empty branches. I feel sorry for the birds, but I cannot have the creeper clogging the gutters. 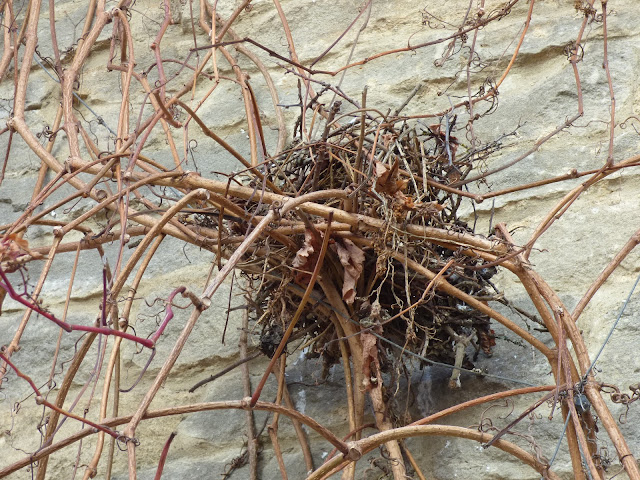