The Travelling Bag by Susan Hill 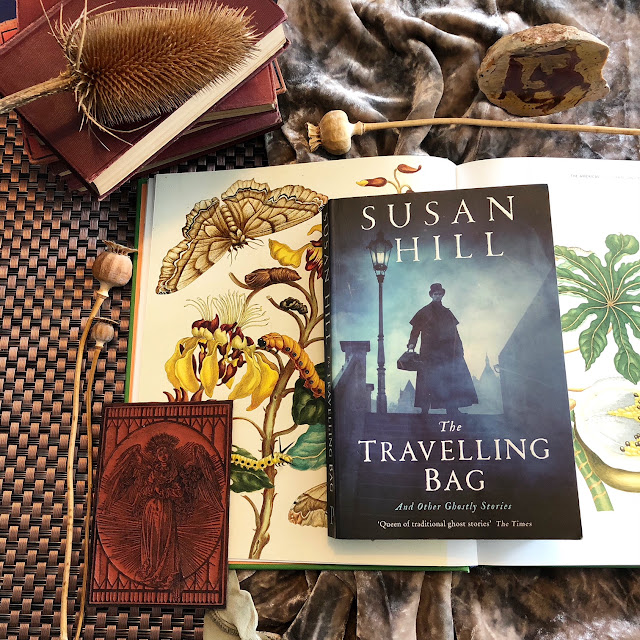 When life is stressful, there's nothing more enticing than to get immersed into a creepy ghost story or a cozy mystery and for a while escape the mundane and sad reality.
Susan Hill is an unsurpassed master of the supernatural fiction. I have read several books by her, and they are all disturbing, creepy, ghoulish and memorable. A perfect escapism, which sends shivers down the spine.

The Travelling Bag is a collection of five chilling stories.

The travelling bag is a story, narrated by a famous paranormal detective, who recounts one of his most intriguing cases. The setting of the men's club, dark and claustrophobic, is a great bridge between an everyday, humdrum unremarkable life and ghostly apparitions.
Walter Craig started his academic career as a brilliant promising scientist, his work is considered ground-breaking. After a serious illness, he hires a young assistant Silas Webb.
Then, one day Webb disappears, taking with him the most important pieces of research.
The person who dies in the story is an unpleasant, ambitious man who has stolen his mentor's academic research which propelled him to glory and recognition, while his old mentor's career was ruined. He was nasty in life, and turned nasty in the after-life. You almost feel it was the natural propensity for him.

Boy Twenty One is a sad tale of Toby Garrett, a lonely unhappy boy in a boarding school. He loves drawing maps and inventing worlds of his own, escaping the abandonment in the fantasy realm. A new boy Andreas comes to school, and Toby befriends him. They spend all the time together, finding comfort in each other's company. Then one day Andreas simply vanishes. Visiting an old manor named Cloten Hall with his school, Toby is startled to see his old friend.
It is not a spooky, ghoulish story as such, more of a melancholic narrative.

Alice Baker is a new office worker. She is efficient, but not friendly and doesn't socialise with her colleagues. There is also something strange about the smell of decay when she's around. Odd things happen in the old stuffy office. Moving to a new building with big airy offices seems like a new beginning, until the similar happenings begin to unnerve people. Who is this mysterious Alice Baker, and what does she want?

The Front Room is the most disturbing and menacing story in the collection.
Inspired by their vicar's sermon, a devout middle class couple Norman and Belinda Irwin decides to transform their front room into a living space for an elderly relative. Solange is Norman's evil step-mother. She is lonely and frail, and knows how to manipulate and guilt-trip people.
With her arrival, the dynamics in the house changes completely. Children are terrified to sleep, a tot has bite marks on his arm, they grow thinner and paler. Then the wicked old woman dies, and everyone sighs with relief.
But their relief is short-lived, as the house gets haunted by the evil ghost.
I hated this story. Absolutely hated it. Granted the skill of the author to create a suspence, this is just  nasty tale. I wish I didn't read it, as I found it upsetting.

Printer's Devil Court could have been turned into a book of its own. Two medical students plot a macabre experiment of raising the dead, and invite the third student, Hugh Meredith, who shares the living quarters with them to witness the process. What happens next, haunts him for the rest of his life.
This story raises moral and ethical questions of how far can the medical research go, and what is life.
The ending is unexpected, as just a few pages before you're lulled into thinking there's if not a "happy-end" as such, then a resolution of sorts.


If you liked this review, you might be interested in reading a review of another ghost story -
Dolly by Susan Hill

What's your favourite ghost story?
Posted by Galina Varese at 13:59:00