In a cottage in a wood by Cass Green 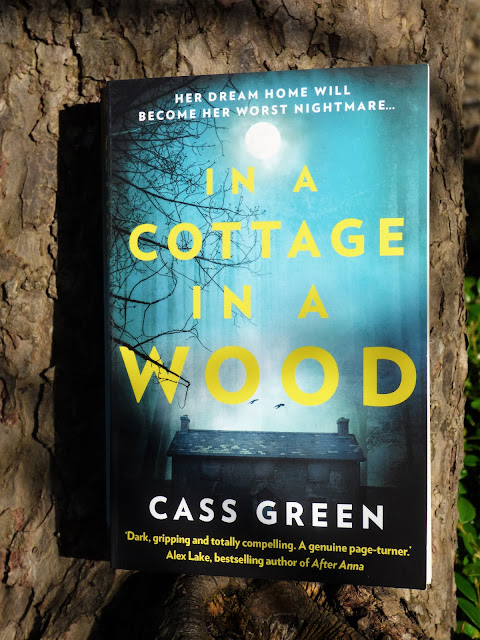 It's doesn't happen often these days that I read a book in two days, but In a cottage in a wood by Cass Green was quite unputdownable.
It was another of the three for a fiver books I picked in The Works recently.
It is a creepy narrative, moody and suspenseful, and the mystery is part-set in Cornwall. There are lots of twists that will keep you on tenterhooks.

The main protagonist is Neve, a receptionist who hates her job and tries to recover from a breakup with her boyfriend. She has recently lost her Dad. Her bestie is heavily pregnant. Her priggish sister and her unbearable husband can't wait for Neve to leave (she stays with them), "helpfully" circling the ads for shared accommodation in the newspapers.

It's hard to relate to an emotionally immature Neve. She is one of these women who likes to get pissed, then every male looks as attractive as Alain Delon in his heyday.
In fact the book starts with her waking up from a drunken stupor in bed with some bloke whose name she cannot recollect. He is not a catch (and he says "pacific" instead of "specific", now that is a crime!), and when she's leaving, he checks his trousers, worried that she might have taken his wallet. Classy encounter.

Humiliated and disgusted with herself, Neve hurries home across a cold London, when accidentally she comes across a woman on Waterloo Bridge. The woman is called Isabelle. While Neve tries to convince Isabelle that perhaps she should get on a bus and away from the cold, she forces an envelope into Neve's hands and then jumps off the bridge into the icy Thames.

Two weeks later Neve receives a letter from solicitors acting on behalf of Isabelle. It happens so that Isabelle left her a cottage in Cornwall as a parting gift. Well, yes, that is a very implausible twist, but keep on reading.

Neve travels to Cornwall, with a hope of sorting out her problems. The cottage is in the sticks, it is dark, gloomy and menacing. There is a dead magpie in the kitchen and lots of rubbish on the floors. And there are bars across all windows.
A dream home happens to be not better than a dark prison, with hidden secrets.
Neve has nowhere to go, she cannot afford to rent anything in London and cannot go back to her sister's place, so she stays in the unwelcoming cottage, hoping to sell it. But before she does that she wants to discover the mystery around the cottage. What was Isabelle scared of? What has moved her to commit suicide? And why, just why did she leave her cottage to Neve?

Piecing together the clues, Neve tries to unravel Isabelle's secrets.

This is an easy read, gripping and entertaining, and thankfully without supernatural elements.
Posted by Galina Varese at 19:54:00