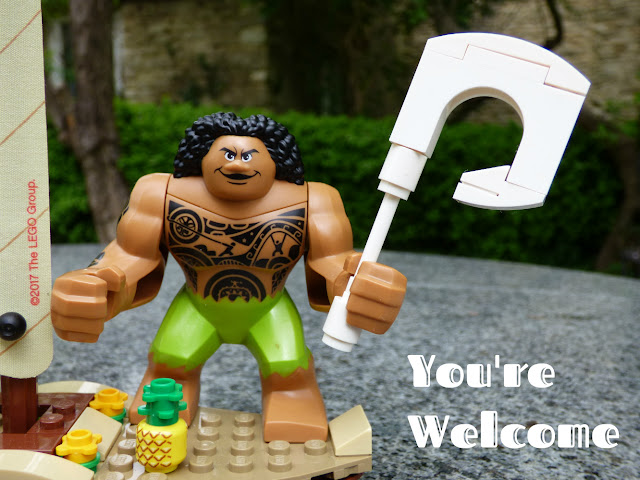 You have probably seen the meme doing rounds on social media which says "It's been a long three years but I'm glad "Let it go" is finally out of my head. - You're Welcome". I'm sure many parents nodded their heads in agreement. You're Welcome is one of the most popular earworms these days (I'm humming it as I'm writing this post. Sigh.)
Eddie and I enjoyed the film, we've seen it both in the cinema and on DVD at home (don't ask how many times). We love the plot and the main characters. The animation is wonderful, and there are a couple of "really cool" songs. Apart from "You're welcome", there's a catchy tune "I'm so shiny".
To coincide with the release of the latest Disney blockbuster, LEGO has produced two Moana sets.

Just before Easter I saw that LEGO Disney Moana's Ocean Voyage was offered at 40% off. There is no way I would have paid the full price of £39.99, but the offer looked very tempting, and knowing how much my son loves LEGO, I couldn't resist buying it. 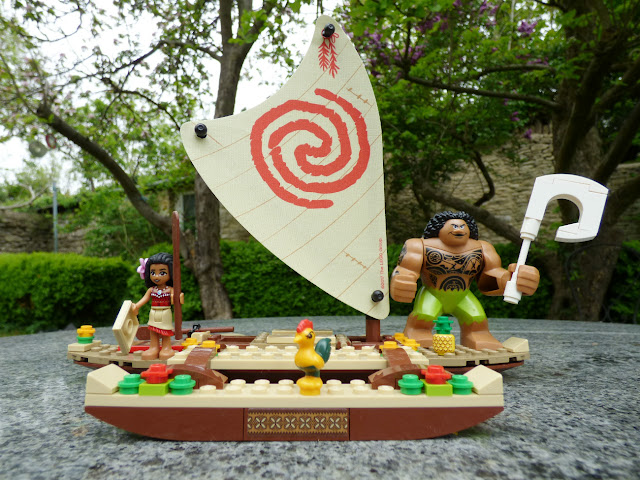 This play set includes a big outrigger sailing canoe with minifigures of Moana, Maui and chicken Heihei, an island of Te Fiti and a little raft with two aggressive coconut warriors.
Moana holds a little printed tile with a fish hook constellation map.
Chicken Heihei looks grumpy, according to my son. Don't know if it's a slightly "off" chicken that we got, or whether that was an original design, but it does look cross rather than just silly. 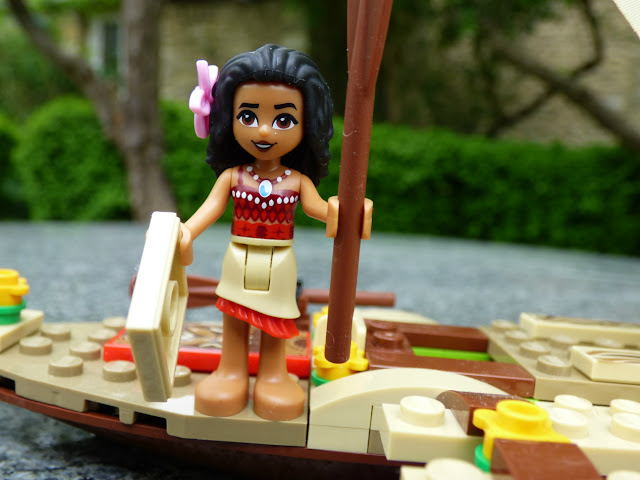 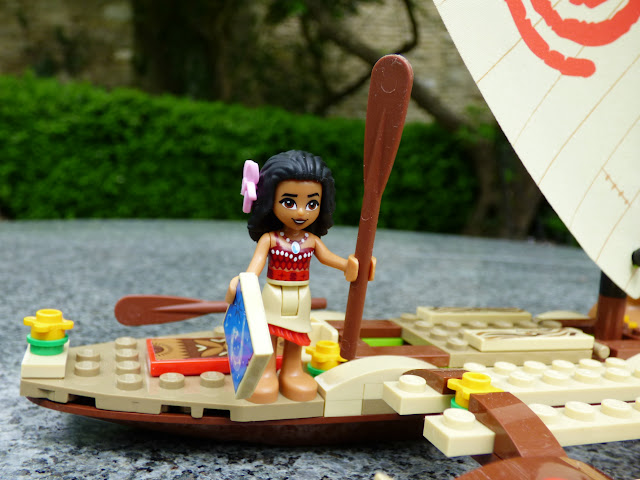 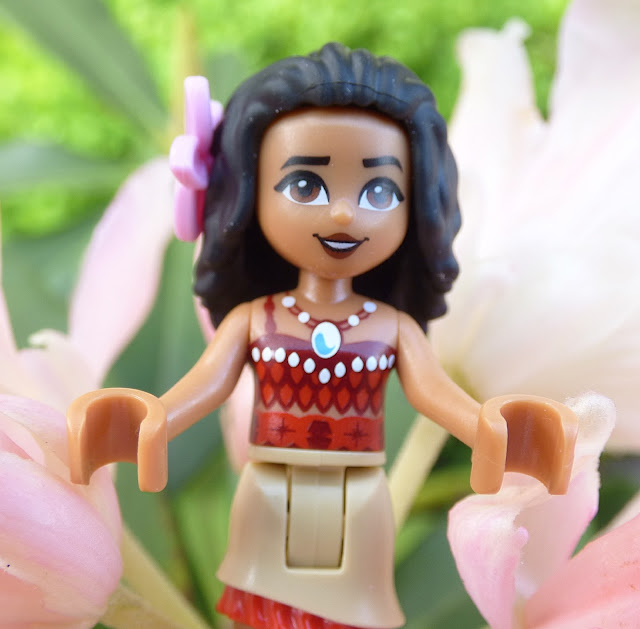 Maui is pretty huge for a minifigure. He doesn't have as many tattoos as the character in the animation, so that's a bit of a disappointment. He holds his magic hook, which is plain white and again not quite the same as you see in the film. Perhaps a couple of stickers would have helped. 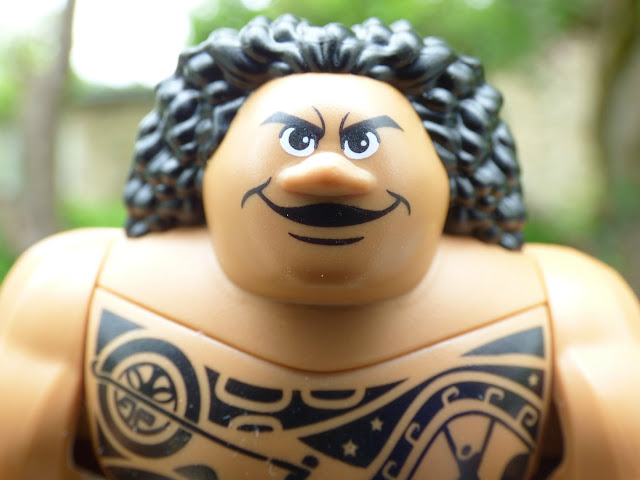 The canoe is well-designed, with two parts. I don't know any sailing lingo, so won't offend you by naming its parts. There is a small trapdoor with space for food storage and hiding Heihei.

You will find the "kind of cute" and scary Kakamora, nasty coconuts whom Moana and Maui encounter during their voyage. Their raft is tiny, it might be the remains of their big vessels. The Kakamora's raft has a small catapult to launch the attack. 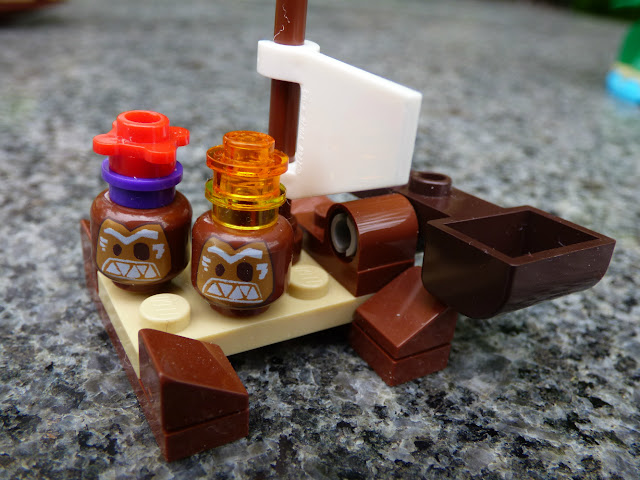 I think a Kakamora ship could make a splendid separate LEGO set.

Te Fiti is a goddess who has powers to create life. When Maui has stolen her heart, she turned into a demon Te Ka, a creature of fire and magma, a symbol of destruction, the opposite of what she used to be. To take revenge on Maui, she is seeking to punish the humans by turning their world into a dark and inhabitable place. 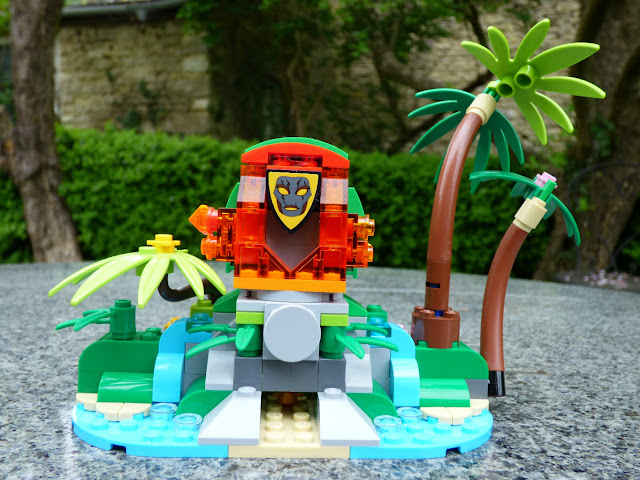 The island of Te Fiti is smaller in size than the canoe, but it is well designed. It is easy to build, with bits of greenery and tiles for the beach.
The main part of the island has two faces to spin around. One is the dark side - Te Ka, the other is Te Fiti with a green heart and pure soul. The heart of Te Fiti is a small printed round tile. 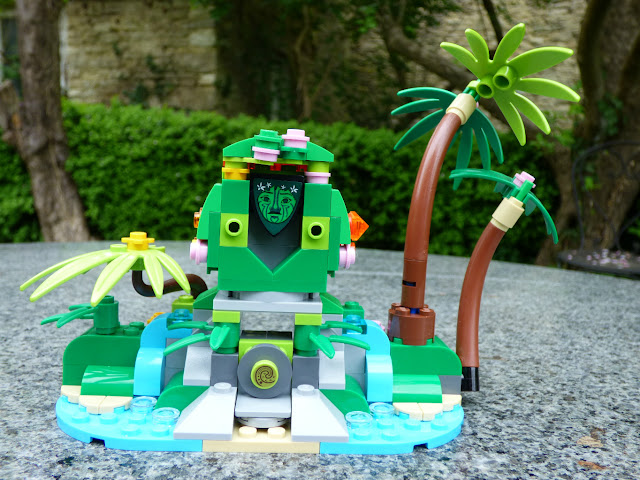 This colourful creative playset will amuse all the fans of Moana. Eddie now asks me to buy the second set in the range. Well, we'll have to see... 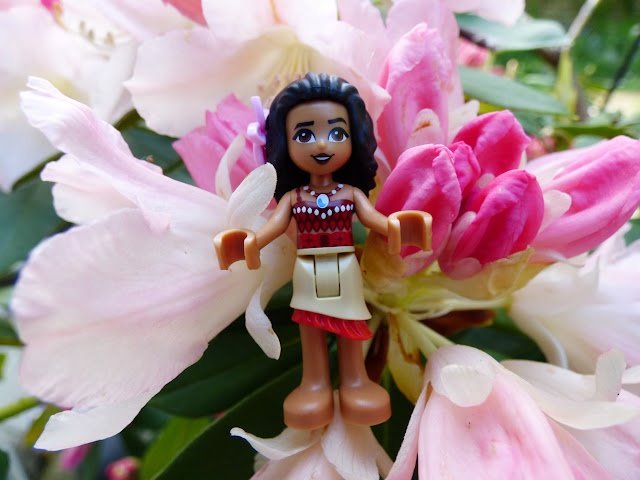