- Mummy, what are you cooking for dinner?
- A duck
- Mummy (with a sigh of horror), a duck should be in a bath.


In the last couple of weeks I have been playing with my new toys, PolyScience vacuum sealer and PolyScience Sous Vide Professional Thermal Circulator. Until recently I had only a very vague idea of what sous vide cooking system is supposed to be. When asked if I might be interested in testing and reviewing these gadgets, I got thrilled with an idea of experimenting with new gadgets and style of cooking. Together with my equipment I received a brilliant cook book, Sous Vide The Art of Precision Cooking which got my creativity flowing. 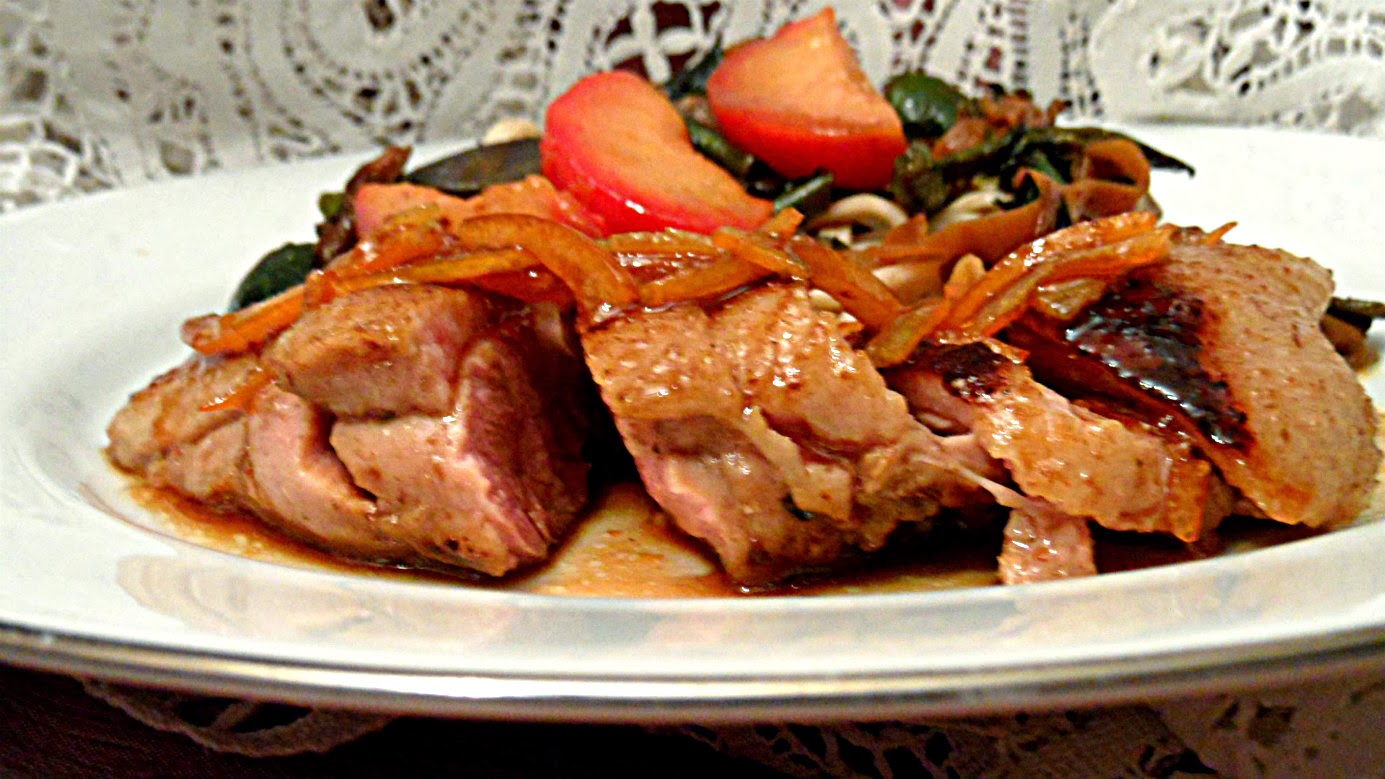 There is over a hundred of tempting recipes in the book, which is divided into themes like meat, fish, fruit and vegetables etc plus ideas for compressions. 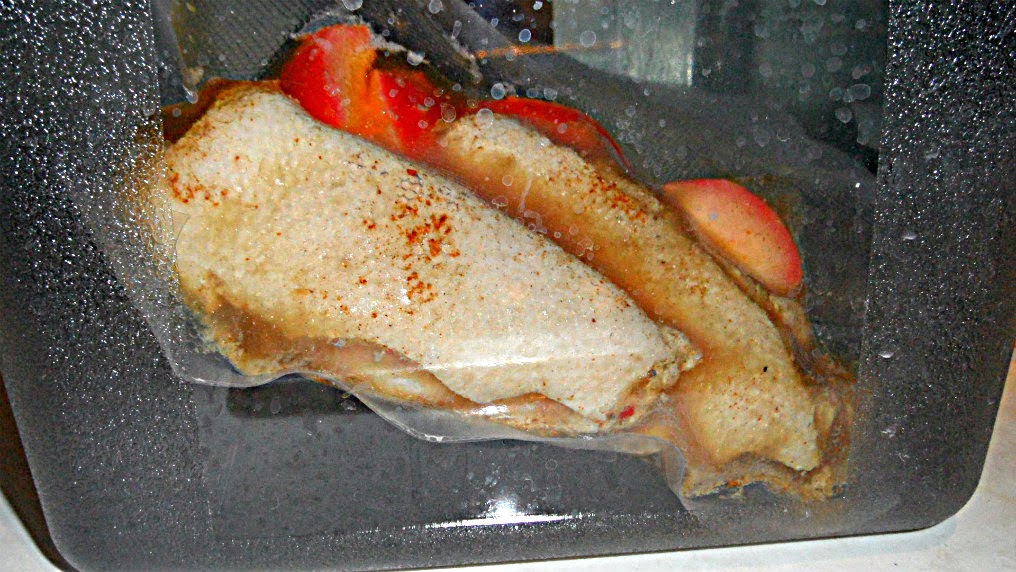 After trying the chicken and cod as well as vegetables, I have decided to cook the duck breasts with marmalade. I have read the original recipe for Duck Supreme in the book, it looked delicious and simple enough to master.
First I mixed a heaped tbsp of blood orange marmalade with the zest of 1 orange and a generous amount of Schwartz Thai 7 Spice blend. From the classic combination I moved to a slightly more Oriental theme as I wanted to serve the duck with noodles and mushroom and vegetable stir-fry.
Two duck breast were mixed with the marinade, and added in a pouch together with a sliced plum. Once sealed, the pouch was put in the bath preheated to 54C for an hour and a half. 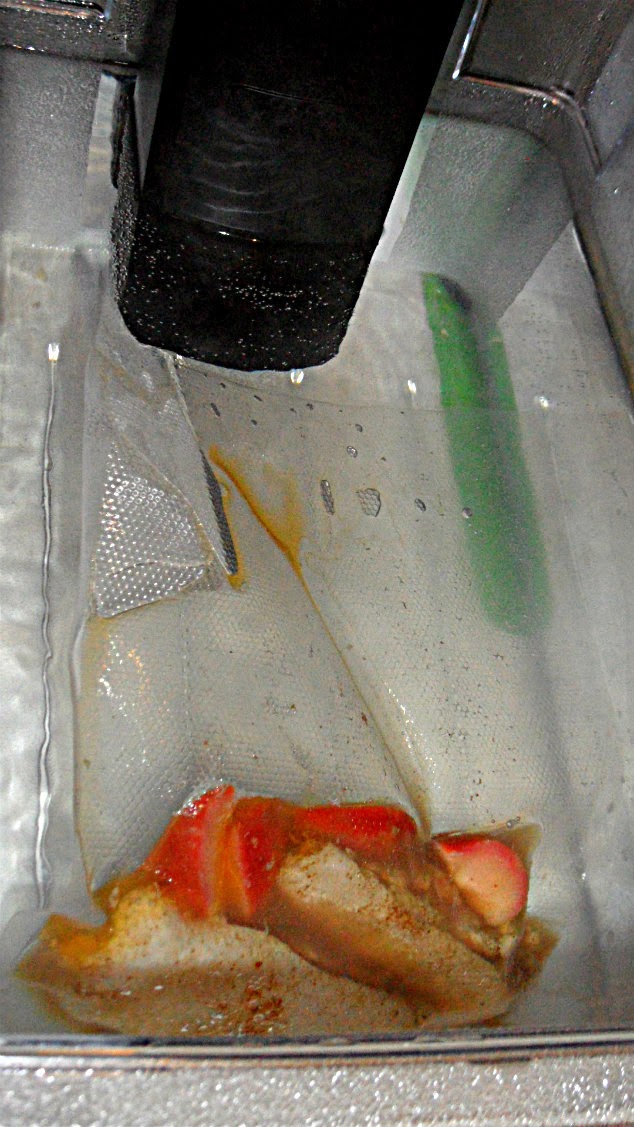 Once done, the breasts left the pouch, were patted dry and fried in a small pan, skin down to make it more crispy. It wasn't as crispy as if you roasted the duck, and there was still a layer of fat left, but I wasn't sure if I kept cooking it, it wouldn't be overcooked. Personally I like my duck well done, even if I know it should be served pink. For me this was the challenge. But I wanted to test it as it is supposed to be, so I left it pretty pink. 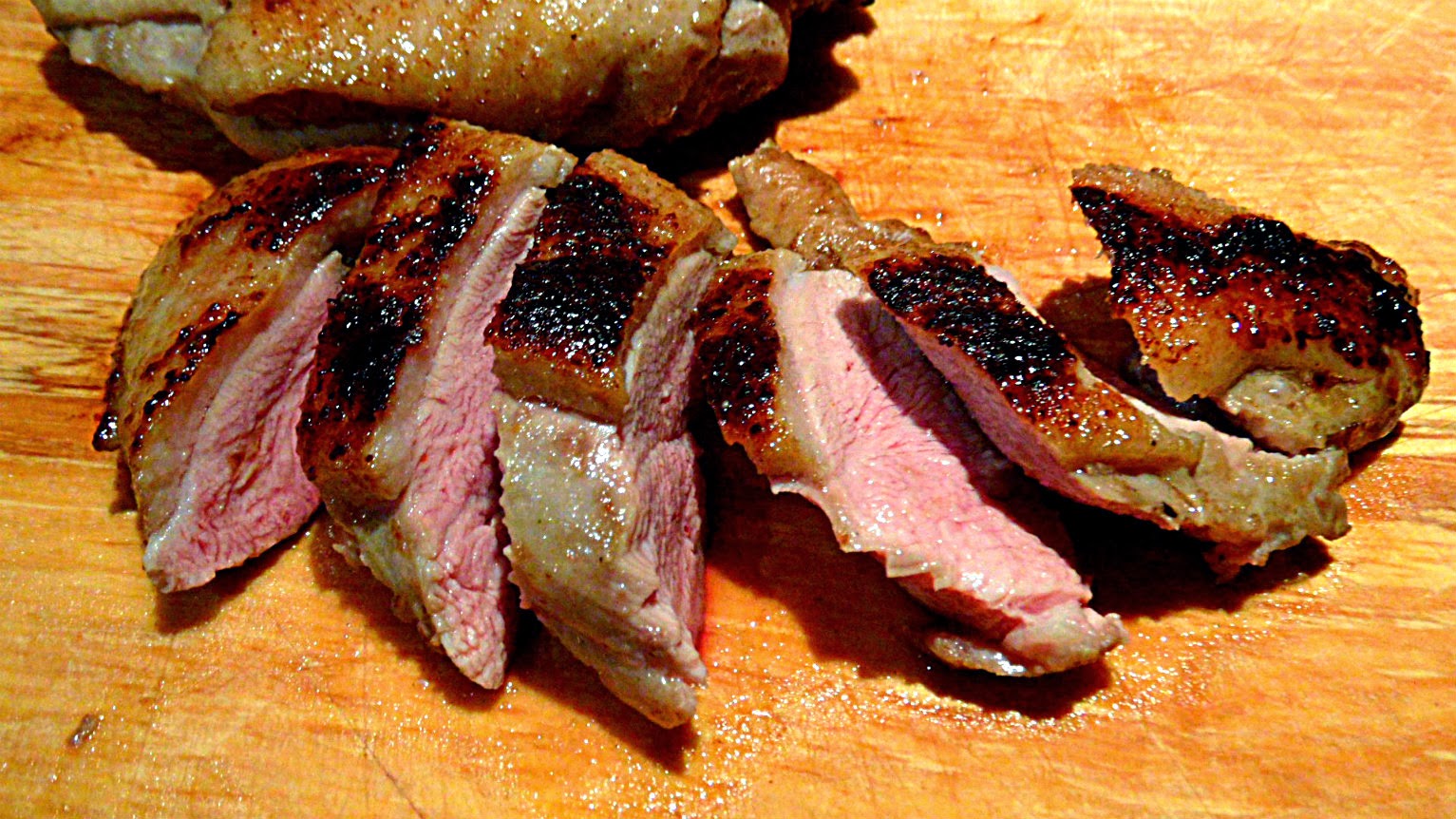 It was gorgeous served with the plum & marmalade sauce (after frying the duck, I let it rest, and quickly reduced the liquid from the pouch in the pan with the juice of 1 blood orange. 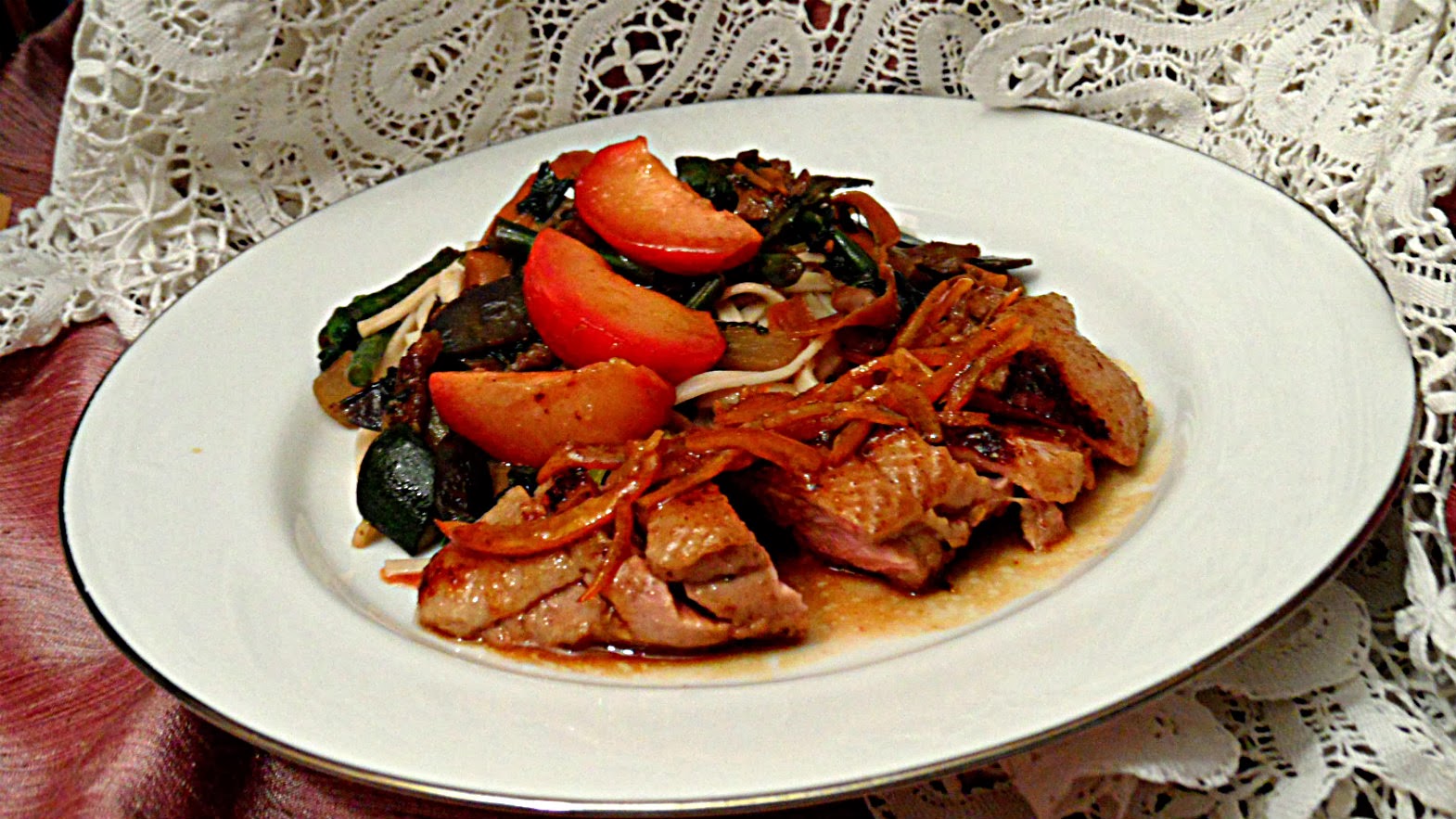 Happy to report that despite my reservations on the duck being very pink, it was perfectly cooked and absolutely melt-in-the-mouth. By far one of the best duck dishes I ever cooked. 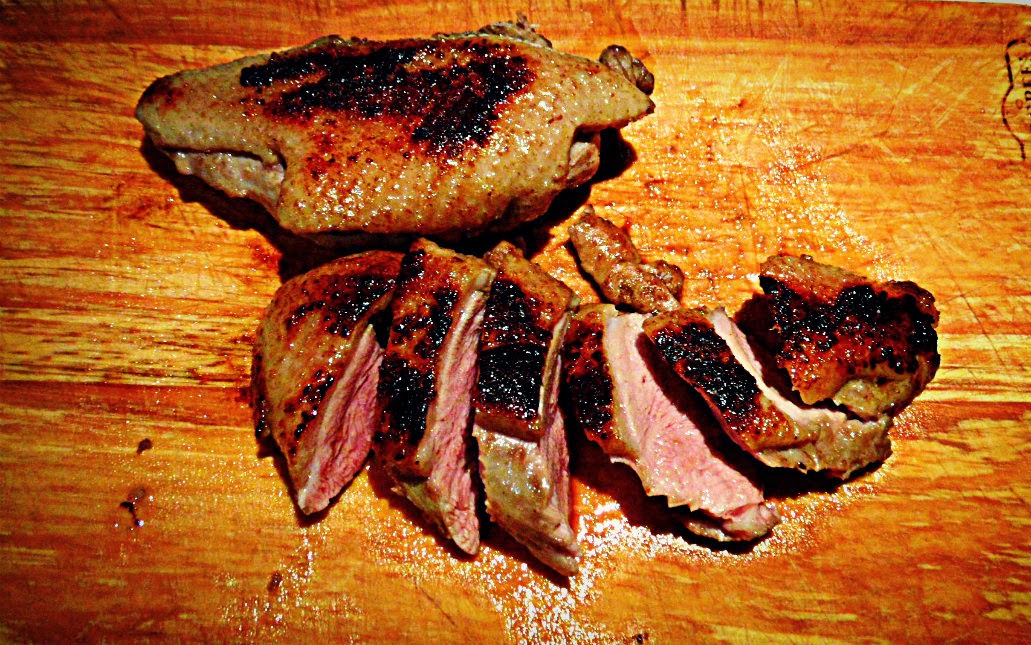 Before I will have to return my toys back, I will try to cook the duck at least another time. 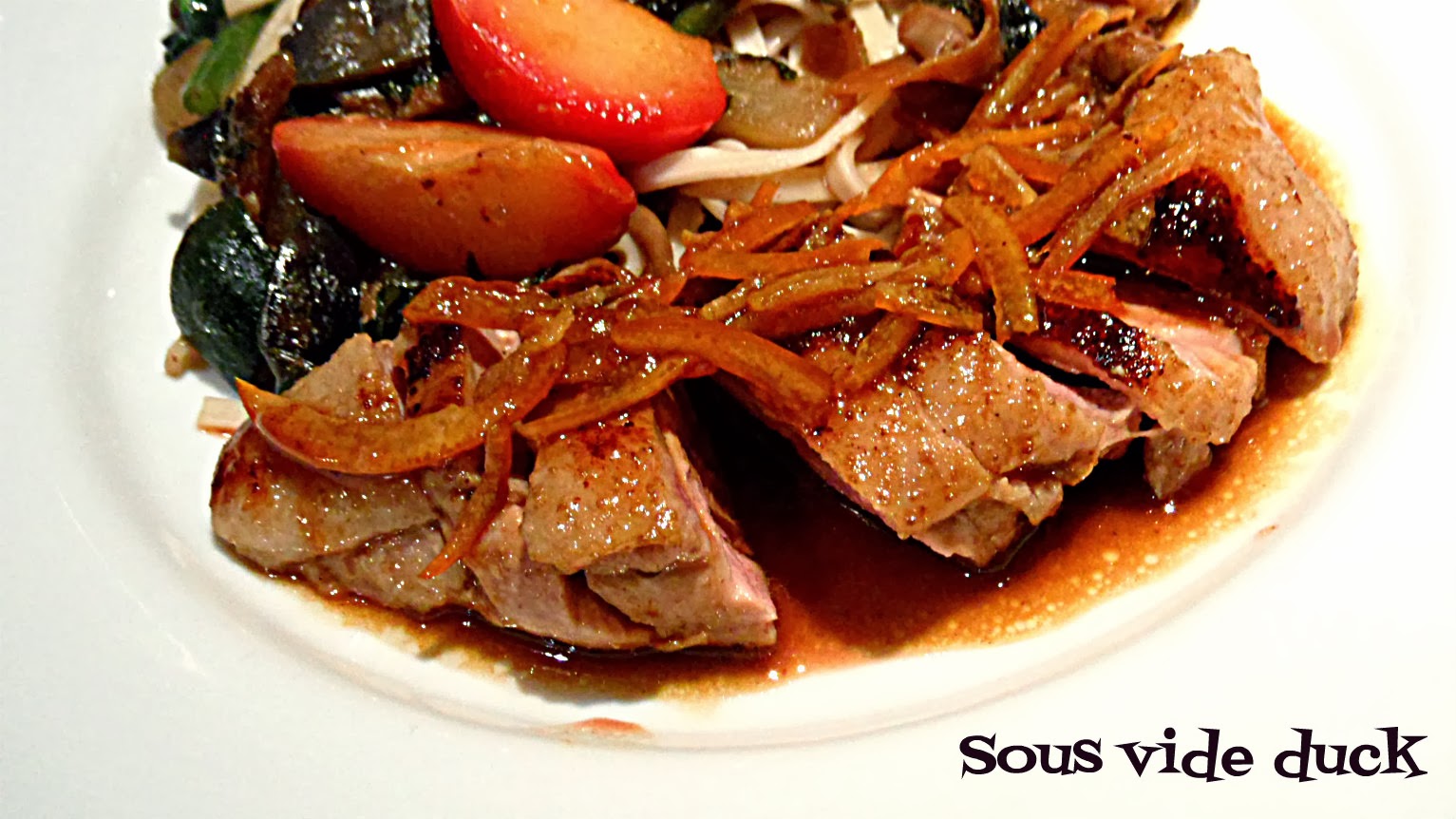 I have used Blood Orange marmalade from The Artisan Kitchen for this dish, but I suppose any good quality orange marmalade would work in this recipe. It has won Taste of the West Best Sweet preserve of 2013, and I can see why. It has an intense deep flavour, and is absolutely wonderful on a slice of bread, fresh or toasted. It has inspired me to make my own marmalade. Last week I made a batch of Seville & Blood Orange marmalade, and was mightily pleased with my results (I might do a blog post about it as well, just to boast how pretty my jars look). Disclosure: I received PolyScience Sous Vide gadgets on loan for the purposes of testing and reviewing. All opinions are mine.
Posted by Galina Varese at 10:48:00