Sasha's selfies: a glimpse in the silent world of autism

The other day I mentioned the splendid book "The reason I jump" written by a Japanese young man with autism Naoki Higashida and introduced & translated by David Mitchell. This book should be on the must-read list of books for all professionals working with autistic children. I thought I knew enough about autism, having read extensively on the subject and from a personal experience of having a son on the spectrum but in many ways this book was an introduction to a different perception of life.

It is a fascinating account of what it is to live with a challenging condition.

One of the questions Naoki asks himself is "When you look at something, what do you see first?" Reading his answer for me is like reading the mind of my own son, who is non verbal and cannot tell me, but I feel it is very close to how he perceives the world:
"When you see an object, it seems that you see it as an entire thing first, and only afterwards do its details follow on. But for people wit autism, the details jump straight out at us first of all, and then only gradually, detail by detail, does the whole image sort of float up into focus"

"When a colour is vivid or a shape is eye-catching, then that's the detail that claims our attention, and then our hearts kind of drown in it, and we can't concentrate on anything else".
That's exactly how my son Sasha sees the world around him, the details take over and claim his attention.

"Every single thing has its own unique beauty. People with autism get to cherish this beauty, as if it's a kind of blessing given to us". How very true, and how poetic. I do believe it is a blessing and a talent to see the beauty in mundane things. We are so often in a hurry that we don't notice that the most simple things could be interesting enough to stop for a second and look at them.

Unlike most of the neuro-typical teenagers and pre-teens, Sasha is totally unaware of the celebrity culture and its trends, so I cannot say he has been influenced by the latest craze of selfies created daily by the minor celebs and big-time stars. He simply tries to figure out what and who he is. His ipad is his best friend and a tool of communication. He doesn't share his photos on Instagram, he doesn't even show them to us. It is for us to discover which new images appear on his ipad. It is not the vanity that makes him take the numerous portraits of himself. He is rewriting himself, it is his way of talking to us about what he feels and thinks. 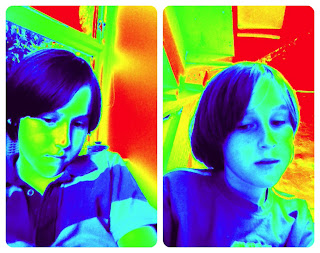 I have written about Sasha's photos and how the discovery of the huge amount of his photos on the ipad allowed me to have a glimpse in his inner world (see my post The fragmented world of Sasha). There are hundreds of photos taken by Sasha, mostly of the everyday objects, an inanimate world. He would take a dozen of images of an object, as if saying: "This is a cup. Look at it! Have you actually looked at it the way I do?"
His images speak to me of an insightful inquisitive mind, a kind soul with an appreciative eye for beauty.
A glimpse in the silent world of autism.