"Mama, when are we going to the garden centre again?"
and just because flattery would get you everywhere Eddie adds "You are soo good at buying things, Mama!"

As a keen gardener, Eddie loves visiting the Burford garden centre. We don't go there as often as he wants, as I don't drive, and though there are buses going to Burford, they stop very far from the garden centre, and there is no proper sidewalk. It looks like people are totally discouraged from walking there and you basically rely on the cars. So we usually ask a friend to take us there by car, and my little man relishes every moment of the trip. Unlike me, he feels fine in the car. 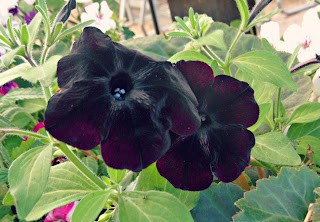 It has become a bit of a tradition that we first browse the shelves at the food court of the garden centre and buy a few delicacies. The range of food products is extensive, but everything is overpriced (expect to pay much less for the same food products in Waitrose).
Eddie requests his croissant with butter and jam, I have a cup of tea with a pastry or a slice of cake.
Of course, the main attraction of the garden centre is the gardening equipment and plants. 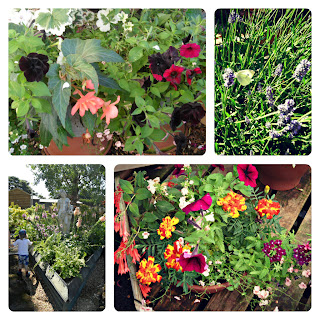 The garden centre is a big compound, you can almost get lost, admiring the flowers and the other plants. They also sell some beautiful wooden furniture, very British, aka old-fashioned style clothes (you would expect this type of clothes on the caricatures about the British snobs, or in photos like you see in Country Life), and vintage crockery and china (probably my favourite area of the garden centre).

With plants you have to be careful, despite being a garden centre, they clearly don't have enough stuff, and some of the pots are overturned, some plants are wilting already, and some (especially the established trees in pots) are clearly diseased. 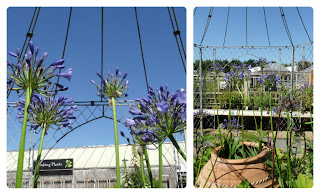 Buying plants there is a bit of a pot luck. For example, all the tomatoes I bought there in spring are doing well, and we had already quite a decent harvest.
The grafted cucumber plant which was supposed to be mould-resistant and cost an arm and a leg (£5,to be precise) proved to be very much prone to mould, just like its simple, less pricey brothers. 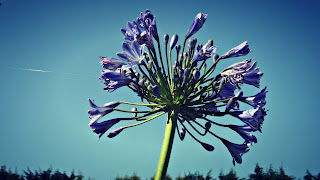 Despite the prices and unreliable live produce, we usually enjoy visiting the centre, and my Mum who came with us the last time we went there, was admiring the flowers. She was particularly impressed with the blue salvias. 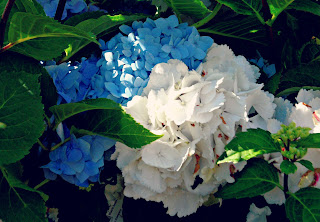 I am trying to decide which fruit tree to buy to add to our garden, and I am still undecided. In the meantime I got this thornless blackberry bush with very sweet berries.
I love looking at the fruit trees in the centre and imagining how they would look in my garden. I would love one more apple tree. Cherry tree? Would I ever be able to enjoy the cherries, as I am battling with the birds as it is, they are total pests when it comes to berries. I managed to save the red currant bushes this year, as I covered them not only in the netting but in the fleece as well.
Ideally I would love a rowan tree, as it reminds me of my home. In Russia we make a very tasty runny jam with the rowan berries, which are soaked in the cold water for 24 hours (you need to change the water a few times) to get rid of the bitterness. The jam is very pretty, with the berries becoming colourful transparent gems. Now wouldn't that be magical to recreate a piece of homeland in my own garden?