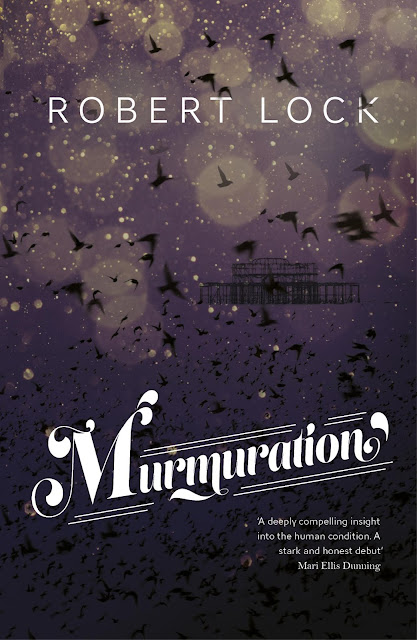 Murmuration by Robert Lock (Legend Press, published on 12 July 2018) is a historical novel set on the Blackpool Pier.
This beautiful book will take you on a journey through history. It is a completely absorbing and thoroughly intelligent read.

It begins with a description of the starlings gathering on the pier roof only to take off in the air and settle into a shifting cloud: the murmuration. The birds dance above the pier for one hundred and fifty years, and many stories have passed beneath them.
"Men and women, their children, their children's children; lives so brief and fragile when compared to the enduring strength of the pier, but possessing a depth of feeling that iron and timber would exchange theie immutability for in an instant. Only the ephemeral can truly appreciate the infinite".

We move back in time to the beginning of the pier, to 1865, when it's starting to take shape above the sea. We meet Georgie Parr, a music hall comic, looking at the pier with his wife.
Georgie builds his career on lewd jokes and smutty innuendos which delight the working class public and enrage the middle class' conventionality and conformity. He revels in his scandalous reputation.
His personal life is full of loss and sadness. His wife dies in childbirth, and his only beloved child follows her nine years later, dying of scarlet fever. He drowns his sorrows in drink and frequents the prostitutes for snatched moments of relief and intimacy.
One such encounter, with a prostitute, young enough to be his daughter, ends in a horrid tragedy.

In 1941 a local boy, Mickey Braithwaite, watches the starlings from the roof of the theatre on the pier. He is a proud member of the Observer Corps. Nowadays he would be called as having special needs. Having watched the starlings, Mickey is convinced they have given him a message to save his Mum, and he runs through the dark town to the Salvation Army building to rescue her. His Mum is saved, but almost everyone else who stayed in the building, is buried under the bombed ruins.

In 1965 the fortune-teller Bella Kaminska is cynically telling fibs to the punters who visit her booth. She is good at reading people and has no scruples in deceiving them, "dispensing her bogus prognostications", that is until she has an unpleasant encounter with a threatening young man.

Then we are in 1989, with the local pier archivist Colin Draper. He's a loner, who lives with his disabled mother. He comes across Georgie's scandalous story and tries to discover what has really happened a hundred years before. As his mother's only carer, he relishes and resents the part in equal measure.

And then there is Sammy Samuels. Another comedian who builds his career on lecherous dirty jokes.
His repertoire is dated and he's relying on the former glories. He lives alone, in a drab flat, and treats everyone with scorn and derision. Women are objects for him. Just like in Georgie's case a young prostitute would be his undoing.
Will the history repeat itself and end up in a tragedy and complete ruination?

Times change, characters come and disappear into oblivion, deficient and wanting.
But it's the deckchair attendant Mickey who's most fulfilled in his life.
"Mickey appeared to inhabit a different world, a place of wonder and infinite possibility, hidden from most people's view behind the theatre scenery of the tangible..."

Humans and starlings aside, this is also a book about the sea resort, and its pier.
"Where once restraint and optimism had proclaimed the town's vigour, now there was only garishness and despondency. The resort, like every other in the country, had been abandoned by all those thousands that once thronged its beach in favour of sun and sangria..."

Murmuration is like a Bayeux Tapestry, with one story embroidered on a cloth after another, scenes changing from the past to the present and lined smoothly at the joins. The pier and eternal starlings provide the connecting thread and background.

"It was then that the archivist realised the pier was the perfect metaphor for civilisation and everything it represented, lifting humanity above the chaos which boiled and churned not so far beneath. And the pier was also a bridge, linking solid ground, the prosaic and understandable, to an entirely different realm, one of delicacy and magic..."


This review is one of the steps of the blog tour. If you fancy reading what the other bloggers thought about this novel, check out the following route: 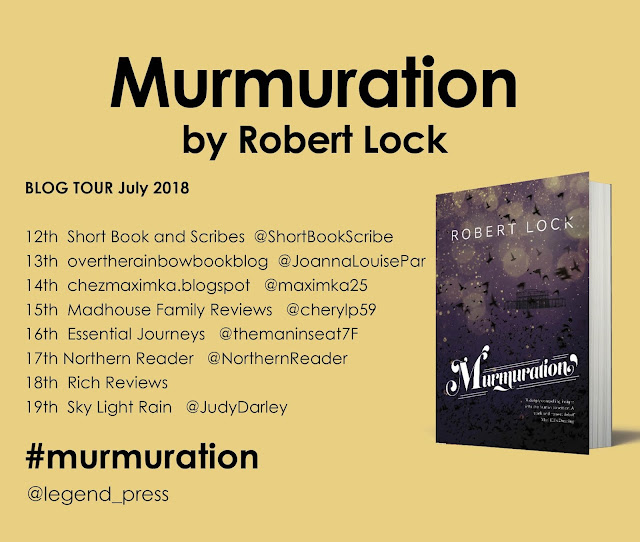 Disclosure: I received a proof copy of the book for the purposes of reviewing. All opinions are my own.
Posted by Galina Varese at 00:05:00