Christmas at the Cornish Cafe by Phillipa Ashley 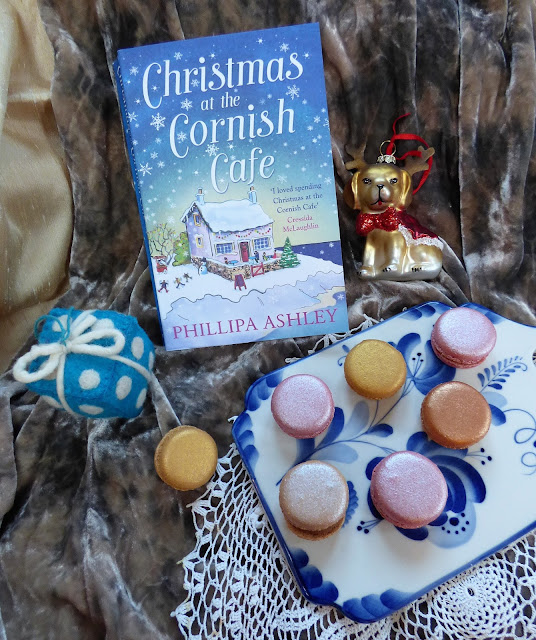 Christmas at the Cornish Cafe by Phillipa Ashley caught my eye for two reasons - it mentioned Cornwall and there was a picture of a cozy cottage on the cover. It also belonged to a super popular genre where chick lit meets cook books. Have a look at the shelves of your local bookshop, there will be dozens of titles along the lines of The beach cafe, The canal boat cafe, The cafe by the sea, The lemon tree cafe, Meet me at the Cupcake cafe etc etc). There is clearly a big demand and supply for this genre. I got my copy in Sainsbury's for £2.99 to take with me on holidays to Italy. And it also had recipes in the back.
I haven't read the first book in the series, in fact I didn't even know that there was a series.

The story is told by two main protagonists - Demi and her boyfriend Cal. For some strange reason they are hiding their relationship from the others, though both are adults and have no families.
Demi ran away from home years ago, after her Mum died and father started drinking, trying to drown his sorrows in alcohol and self-pity, without noticing that his daughter needs him.
Cal's parents are dead too, so there is nobody to prevent them from seeing each other.
It was not clear why they had to sneak into each others' homes to have sex.
And there is plenty of that, if not actually doing it, then thinking about it. All the time.

I don't know what it is about modern fiction set in Cornwall, but there is always a dark, brooding male character with a hot bum. I mean, who in real life even notices bums?!
There is not much of a relationship between the two, just sneaky sex encounters and coupling in the kitchen or broom cupboard (or was it a supplies room?!). No foreplay either. Let's just say, I was not impressed with the sex scenes in the book.

Demi is opening her cafe, Demelza's, named after her granny. She lives in a small cottage, with her silly dog Mitch, who tries to escape at any given opportunity.
Cal runs a holiday park, with cottages and yurts to rent. His backstory of serving in Syria as an aid worker is poignant and adds an extra dimension to his character.

Once the holiday park is open, their first guest arrives on a stormy evening.

The first encounter between Demi and Kit Brannan reminded me a bit of the first meeting between Jane Eyre and Mr Rochester, when he appears out of the darkness and shows his grumpy side. Like Mr Rochester, Kit has his own skeletons in the attic (albeit not a mad wife). He claims he came to spend a few weeks in Cornwall to write his novel in peace, but he has a different agenda on his mind.

Is it going to be a love triangle?

The story is a classic chick lit, easy-going and slow-paced. There are moving scenes of the devastating floods in Cornwall which happened a few years ago.

My favourite bits were descriptions of Cornwall, they are atmospheric and evocative, and made me miss the seaside. And the recipe for mince pie cookies sounds lovely, I must try it.
Posted by Galina Varese at 16:35:00