Meet Me at Wisteria Cottage by Teresa F.Morgan 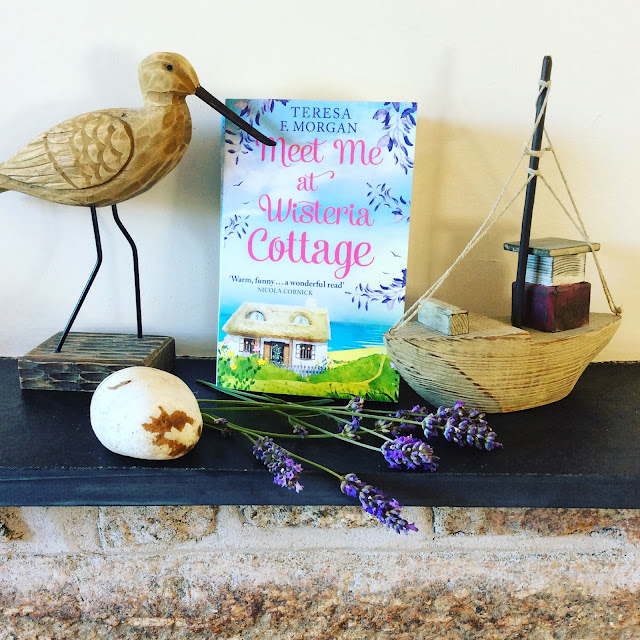 I must stop buying books for the pure reason they are set in Cornwall.
When I read the blurb on the back of Meet Me at Wisteria Cottage, it was quite obvious what genre it is. There is nobody to blame but myself for buying it. The words "the Cornish coast" sold it to me.
We were going on a holiday to Cornwall, and to get me in the mood, I bought two paperbacks set in Cornwall.
I think for many people who love chick lit this will be a perfect holiday read. I had a look at Goodreads after I finished the book, and it has gushing reviews (beautifully written, passionate & picturesque, wonderful, warm and funny (funny? where?)) - it's as if we were reading different books.

I am not the biggest fan of chick lit, so perhaps I am being unfair on this book, but I struggled with it.

I didn't warm up to Maddy, an artist who opened an art gallery in Cornwall, and is recovering from a broken relationship to a controlling ex-boyfriend Connor. She is in her late 20s, but behaves like someone years younger, totally immature.
She comes back home to find it in flames. The fire brigade and the forensic team suspect arson.
There is not much of a mystery of who wanted to burn Maddy's house, it was quite obvious.

Then there is next door neighbour named Harry, a gardener who tries to come to terms with the tragic past. He's an ex-firefighter, who struggles with depression. He comes to Maddy's rescue and offers her to stay in his house until her own house is fixed.

No prizes for guessing, that they quickly fall for each other.

What looked like an innocent charming romance from the pretty fudge-box-style book cover, turned out to be quite smutty. 50 shades of Cornwall. I was quite indifferent to what was going to happen to the main protagonists, and found them both moderately annoying.
I do sound like a pearl-clutcher, but numerous references to bums mildly irritated me.

Maddy is obsessed with male bums. "Maddy followed the tall man admiring his build, and his bum, from which she quickly averted her eyes to the ground... it was hard not to admire his body". That's the builder.
"Harry kissed her again and got out of bed, and Maddy bit her lip watching his tight bum as he walked naked out of the bedroom" That's the gardener-boyfriend.
And it's not just Maddy, her middle aged friend and colleague is exactly the same. Must be all that fresh sea air.

I left the book in the cottage where we stayed for a week, maybe the next reader will enjoy it more than I did.