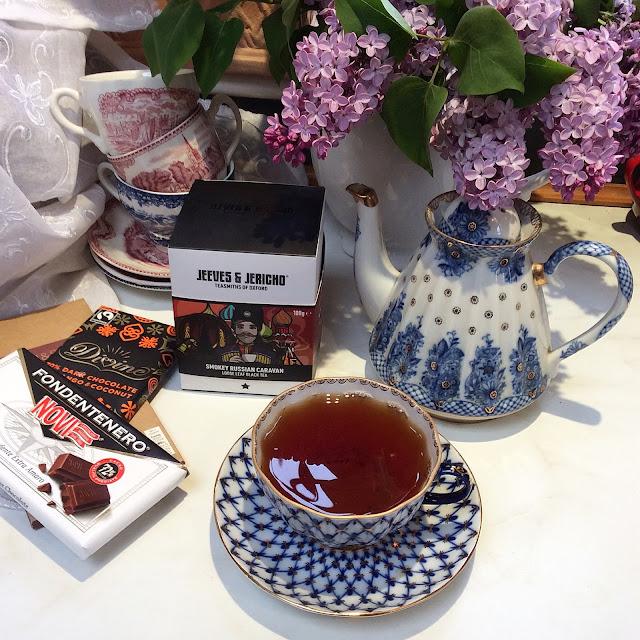 Having picked some tea, he drank it.
Then sprouted wings
And flew to a fairy mansion,
To escape the emptiness of the world...
Chiao Jen

After a sleepless night with a rather unsettled Sasha who often manages to survive on just a few hours of sleep, I was wandering through the twilight zone. Having taken Eddie to school, I exchanged a few words with the school secretary, who looked at me with sympathy and said "Now take it easy. Go and have a big cup of strong tea".

It made me smile. I find it amusing how many Brits think a cup of tea is the solution to many problems. I wish... If only my troubles diminished with every cup of tea.
I drink so much tea, my life should be miraculously free of any worries.

I did come home, and brewed a small pot of tea. I have chosen a strong Smokey Russian Caravan from Jeeves & Jericho.
It is a fusion of Lapsang Souchong and Keemum Chinese whole leaf teas.
I bought it a few weeks ago in a local cafe which has several shelves dedicated to tea and tea pots. My kind of teashop. I'd be happy to try all of their teas (though, truth to be told, my kitchen has more tea than their shop. Ahem.)

Russian Caravan is one of my favourite teas, probably second favourite after Earl Grey. I have tried several brands of this tea, and find it very refreshing and palate-cleansing. It doesn't need any milk, but if you take tea with milk, a little dash would not distract from the smokey flavours.

Our local cafe Coffeesmith used to offer a decent cup of Russian Caravan. But when I went there for a cup of tea last week, I was served a pale green tea. When I queried if they might have by mistake offered me a cup of green tea, the young lady at the counter told me it was a Russian Caravan. She clearly thought I was a fusspot, and I'm too polite to insist. I think I'll just order a latte there from now on.

Russian Caravan tea has such a distinct flavour and aroma.

Jeeves & Jericho is a local, Witney-based tea business. They call themselves teasmiths, and boast of a new modern approach to tea.

Their boxes come in a very striking, distinct design, and look different on the shelves. They are colourful and striking.
Each character representing a tea flavour is a national stereotype.
For Russian Caravan, you find a mustachioed Cossack in a tall bear hat, with onion cupolas of the church in the background.
I don't necessarily associate black tea with Cossacks. They would definitely drink herbal brews, like wild thyme tea, mint and spices. Fruit compotes made with dried fruit and kvas.

I have also bought a couple of other teas from Jeeves & Jericho.
Tea might not solve my problems, but it surely keeps me sane. 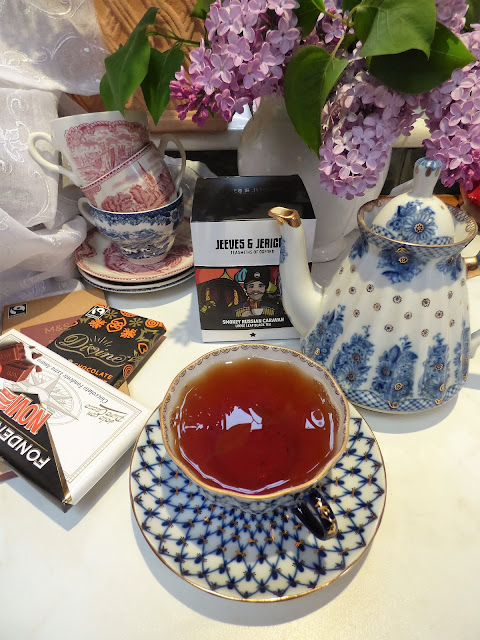