"Mummy, are we going to meet a real monster?" (Eddie) 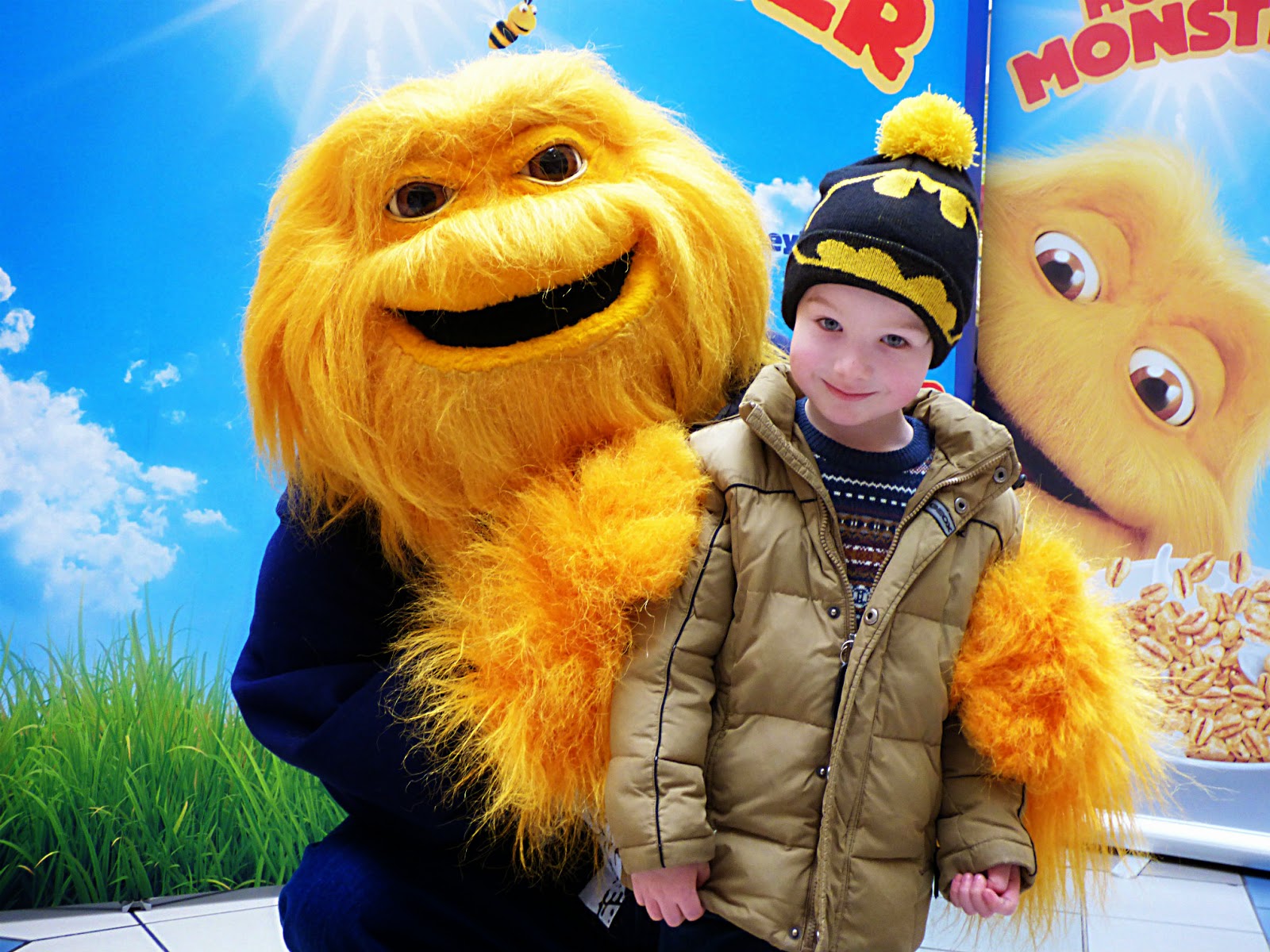 Eddie was very excited when I told him we were going to Oxford to meet the Honey Monster. We caught a bus to Oxford,  We arrived a bit early and were told the Honey Monster is having a little break. Thankfully, Mary from Over40andamumtoone and her Monkey were already there, so we had a little walk around the Westgate shopping centre.
It took both Mary and me a bit of time to try to convince our guys to hug the Honey Monster, as all of a sudden they have gone all shy.


Honey Monster's new tour has kicked off in Birmingham’s Bullring Shopping Centre on 24th January 2015 from where he’ll be appearing in major shopping complexes in the Midlands throughout February. On 1st March 2015 his grand tour finishes in style at Star City in Birmingham, the ultimate venue for MONSTERFIED family fun.
Honey Monster invites you to join him and unleash mischief; give boredom a fright!
If you have your photo taken with the Honey Monster, you can upload your photo to his Facebook/HoneyMonsterUK or Twitter/@HoneyMonsterUK page with #funmonsterfied hashtag for a chance to win an exclusive "I've met the Honey Monster" t-shirt.


If your little people would love to meet the Honey Monster as well, here are some dates to mark on your calendar for the event closest to you:


As told by honey bees, the Honey Monster's friends:
"It’s been very busy at Honey Monster HQ and the packaging design is not the only thing we have updated. The new packs feature a delicious new recipe with 20% more yummy honey than before. At the same time, we have reduced the overall sugar level* and have added clearer nutrition information frontof-pack, so you know exactly what’s in there and what’s not. We hope you enjoy the classic taste of Honey Monster Puffs that you know and love!" 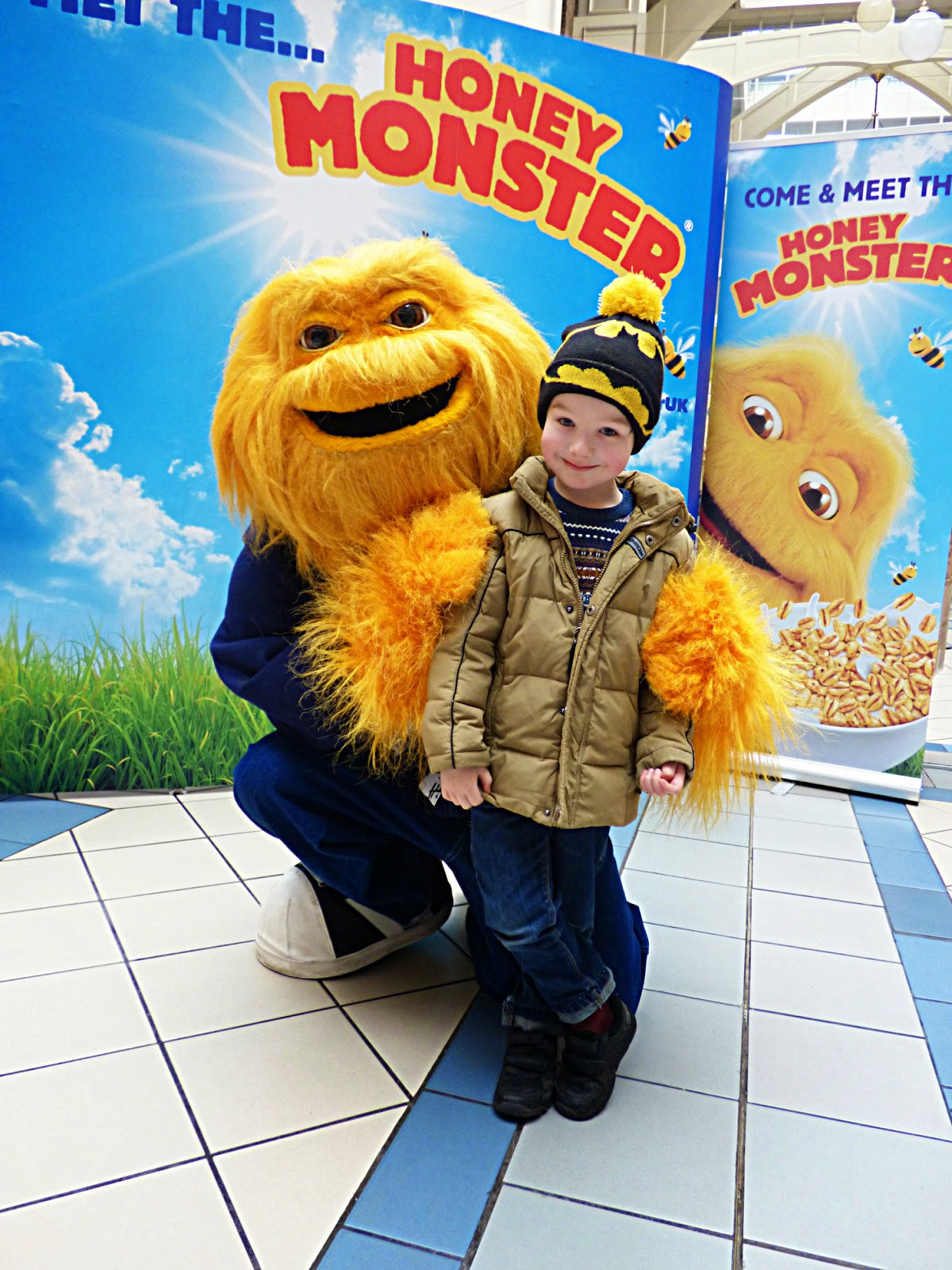 A while ago there was a bit of a hullabaloo regarding the rebranding of Sugar Puffs into Honey Puffs and the use of words "Honey goodness". A ruling from ASA banned the brand from the use of this expression on the packaging.
In my opinion, and No, I haven't been paid to say my piece, this is just another example of the state thinking that parents cannot make their own food choices (well, some obviously cannot).
Yes, sugar is bad for you, but actually honey is well known for its medicinal properties. I am not going to write an essay on the merits of honey, there are enough sources available in print and online about the goodness of honey.
Everything these days needs to come with a health claim. Just today I read that there is a new directive for the supermarkets to remove the daffodils further from the food aisle, as apparently there were a few cases of food poisoning. Well, it's not the daffodils' fault, but the ignorance of the people who have eaten them.
The same with the cereals. Obviously, if you eat a whole big box of sweet cereals in one go, it cannot be good for you. If you eat it in moderation, it is fine.
We are not big on cereals at breakfast time anyway. My guys like snacking on granola or cereals as an afternoon snack, and only once in a while.

The raise in obesity levels in young children these days is a big problem without doubt, but that is also thanks to the very sedentary lifestyle, an addiction to all those game consoles and ipad culture.
If children are active and have a balanced diet, their weight won't be affected (unless there is an underlying condition).
We, parents, should be an example for our children: unglue our bums from the sofa, venture into the garden or nearest park to do some exercise, spend less time online and be more active.

I've just been reading a family saga based in the North Dakota in the end of the 19C-beginning of the 20C. The amount of food they consumed was quite staggering, but then they worked so hard all day and burnt all those calories. But I'm digressing even further.

What the state should do is support the British farmers and producers, not play God by growing GM-crops in this country, introduce very clear nutritional labelling, as well as the origins of the product labelling, offer healthy meals in schools and educate the younger generations on the healthy food choices. 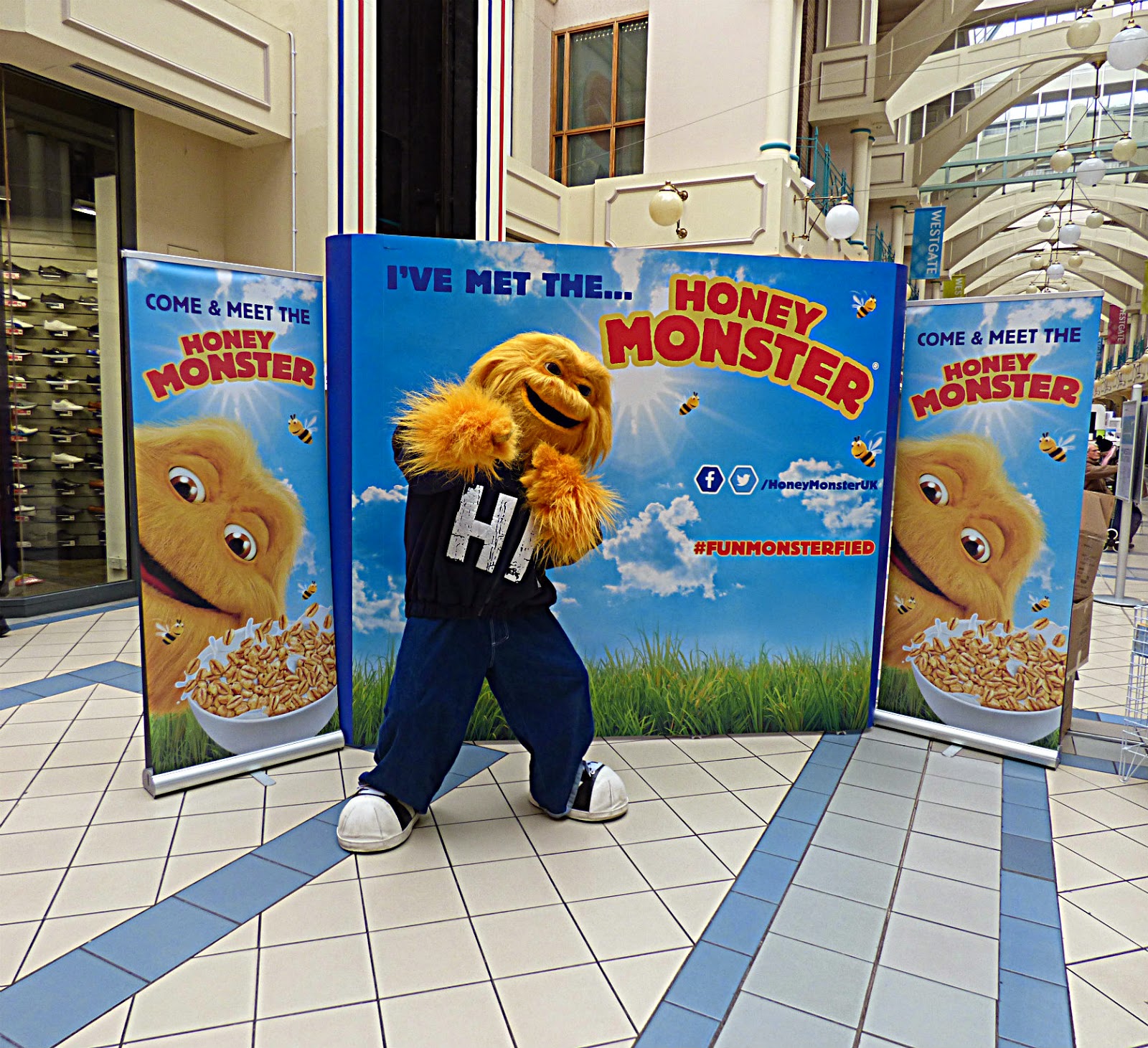 We have tried new Honey Monster Puffs which are whole grains of wheat, puffed and drizzled with honey. I can taste a bit of molasses too.
Honey Puffs are free from artificial colours, flavours and preservatives. They are actually pretty low-cal too, at 95kcal per 25g portion (that's one mini-box). With a skimmed milk, it might be one of the breakfast options for those who are on 5:2 diet. 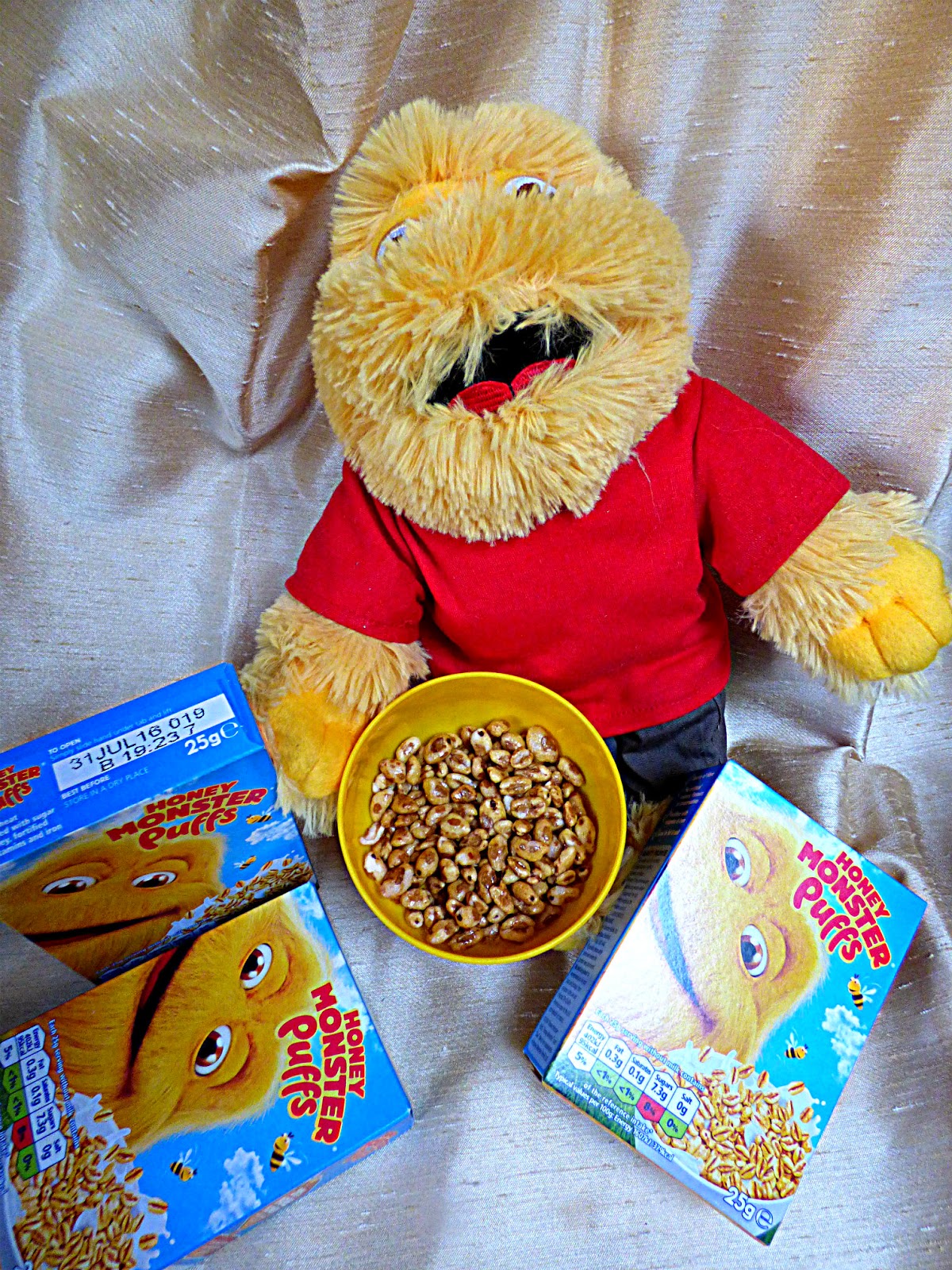 Many thanks to Mary Proctor for taking photos of Eddie and me with the Honey Monster.

Disclosure: we received a goodie bag with a few packets of cereals and a soft toy. 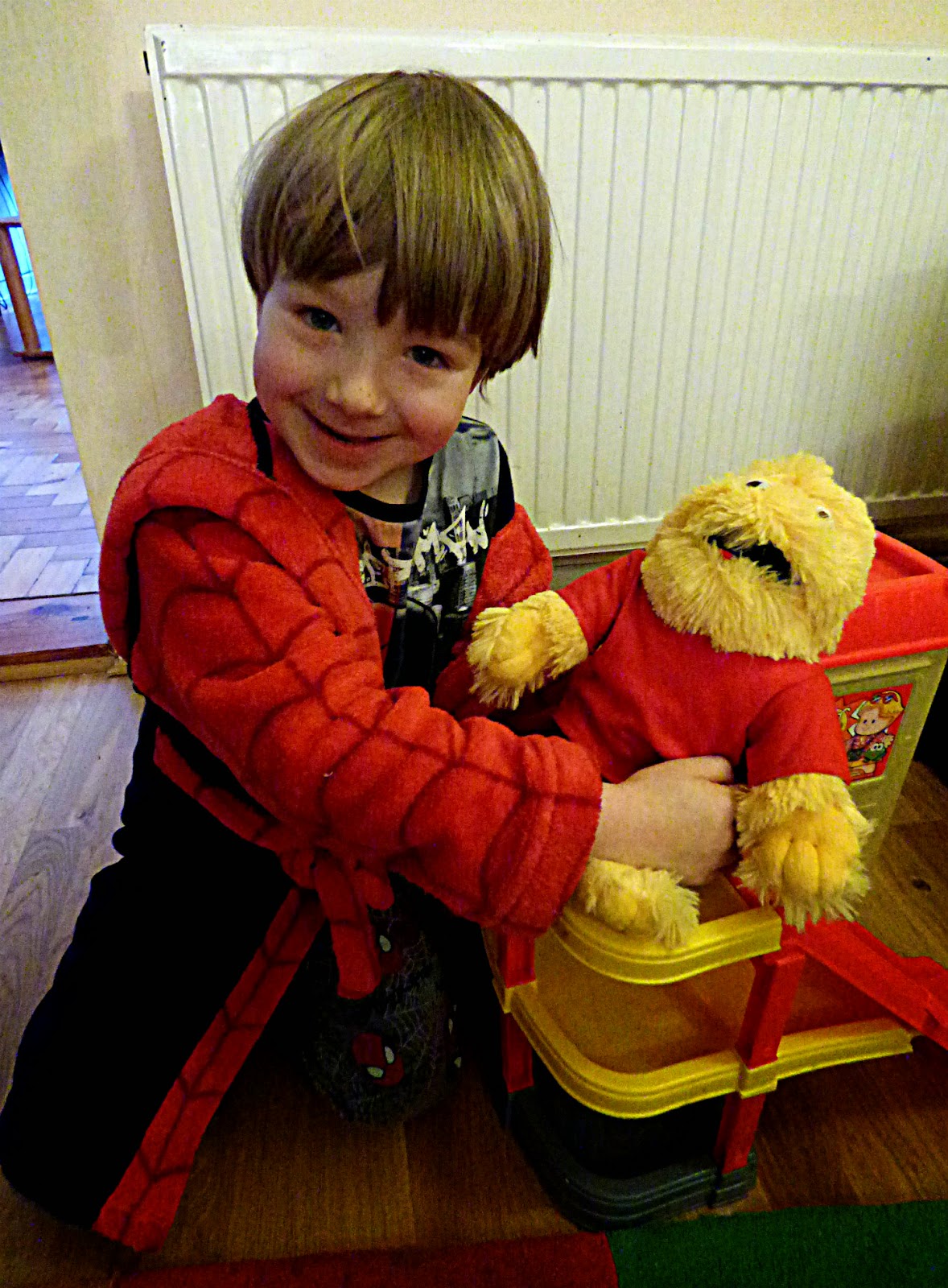