Blood On His Hands by Ian McFadyen #Blogtour + Giveaway 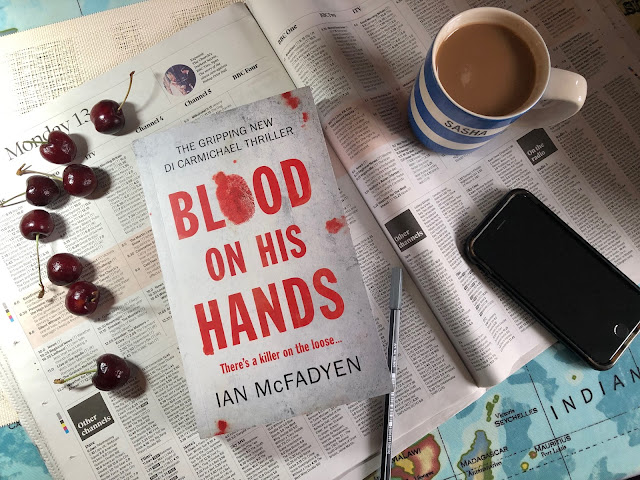 "So, what's happening?" enquired Rachel as she and her boss sped out of the police station car park.
"We're heading over to the C of E church in Moulton Bank," Carmichael replied. "That was Barney Green on the call at the station. He reckons a man has just come into the church with blood on his hands, claiming to have committed a murder."

Blood on his hands by Ian McFadyen is a murder mystery, featuring DI Carmichael. It is the 8th book in the series, which reads perfectly well as a standalone.

It begins with a dramatic entrance - a stranger with blood on his hands sets foot into the church and approaches the vicar. As the vicar calls the police, the stranger flees.

"I realised that all wasn't well as soon as I saw him at the back of the church. He had such a haunted, troubled look on his face. I asked him if he was all right, at which point he just said, "You need to help me, I've just killed someone." It was then I saw his hands, which were stretched out palms upwards. They were stained with blood", tells the vicar to the police.

The mysterious stranger seems to have disappeared without any clues to his identity. DI Carmichael and team are trying to find out where he has come from and which route he went.
Could the incident in the church be a sick practical joke?
Then, less than 24 hours later, a corpse is discovered in the boot of a car abandoned in a quiet country lane. The victim has bloodstained hands.

And this is just the beginning of a shocking killing spree. The victims are from different walks of life, and don't seem to be connected.

Will DI Carmichael and his team discover the motive behind the murders and catch the killer?

This book was my first meeting with DI Carmichael, and I will try to find the previous books in the series.
He is a flawed but likeable character.
There is also a crew of supporting characters, who are convincingly drawn, and some ancillary plotlines, with Carmichael's daughter and the school bullies who make her life miserable, and background insights into the police team.

Intricate, pacy plotting and a creditable grasp on police procedure are combined to produce a real page-turner.

This gripping tale of revenge feeds on our dark fantasies of what we'd like to do to our bullies. The covert personal vendetta acquires an almost artistic flair, with a taste for dramatic effect.

Fast-moving and compelling, Blood on his hands has twists galore. 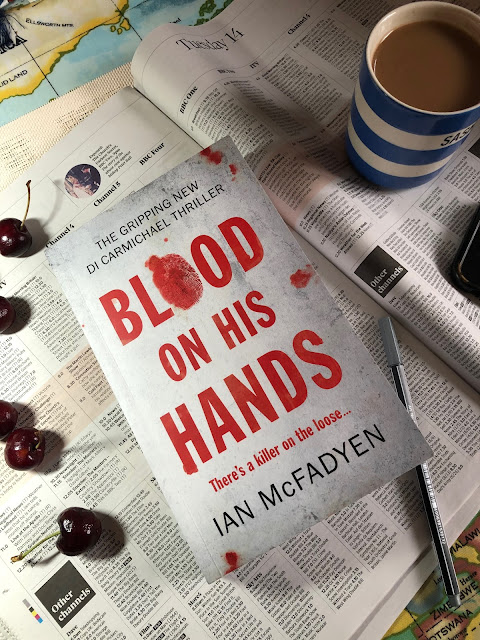 Author Bio:
Ian McFadyen lives in Bishops Shortford, Herts and has published seven books in the Carmichael series so far. McFadyen has built up a strong following and is particularly well supported by library borrowers - being positioned in the top 10% of most loaned authors in the last few years. Favourably mentioned alongside Wilkie Collins and Colin Dexter, McFadyen's titles are all available in paperback and on kindle.

Many thanks to Ian McFadyen, The Book Guild Ltd and Rachel's Random Resources for my copy of the book!
This post is part of the blog tour, please check out other reviews:

If you like the sound of this thriller, now you have a chance to win a copy for yourself.

T&Cs:
UK entries welcome.
Please enter using the Rafflecopter box below. The winner will be selected at random via Rafflecopter from all valid entries and will be notified by Twitter and/or email.
If no response is received within 7 days, then Rachel's Random Resources reserves the right to select an alternative winner.
Open to all entrants aged 18 or over.
Any personal data given as part of the competition entry is used for this purpose only and will not be shared with third parties, with the exception of the winners' information. This will be passed to the giveaway organiser and used only for fulfilment of the prize, after which time Rachel's Random Resrources will delete the data.
I'm not responsible for despatch or delivery of the prize.

Please bear in mind this giveaway is run across several blogs.

Chez Maximka blog is only hosting the Rafflecopter gadget to promote the giveaway, and has nothing to do with any collected data or selection of the winners.

a Rafflecopter giveaway
Posted by Galina Varese at 00:10:00