This was one rollercoaster of a week for us. Sash was leaving on Monday to stay for five days at Butlins, Minehead, and we took Eddie out of school to do things together which we cannot do as a family of four any longer. It didn't work out as planned. Sasha couldn't cope with a new place and everything being out of his normal routine, and was too distressed, so he came home earlier.
Disappointing, yes, very much so, as we were looking forward to having a little break and devote all our attention to Eddie, but life is life, and that's what it means having a family member with a serious disability - life usually revolves around their needs.

At the weekend I made one last dash to the shops to get ready for the next days' trips. Walking through the flood fields, we saw this pretty skyline with clouds which looked like dinosaur ribs. 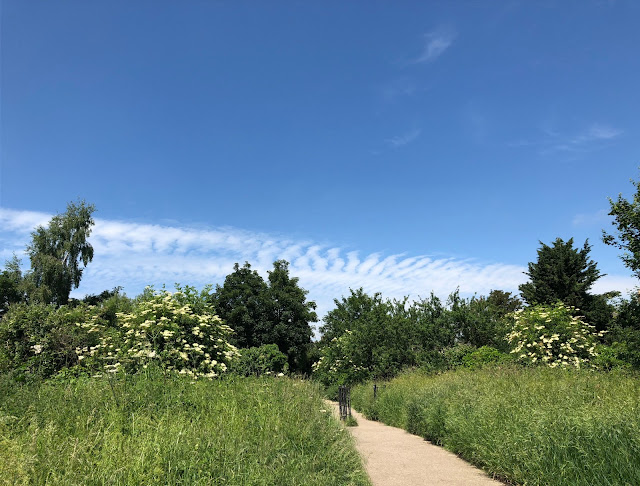 On Monday we waved Sasha good bye, and jumped on the bus to Oxford. Three train changes later and a taxi ride, and we were in Legoland at 12.30pm, which didn't leave us much time.
We managed to cram as much as possible, but still didn't quite make all the rides.
Eddie's absolute favourites were the Splash park and the Squid surfer ride at Adventure Land.
His smile really says it all. 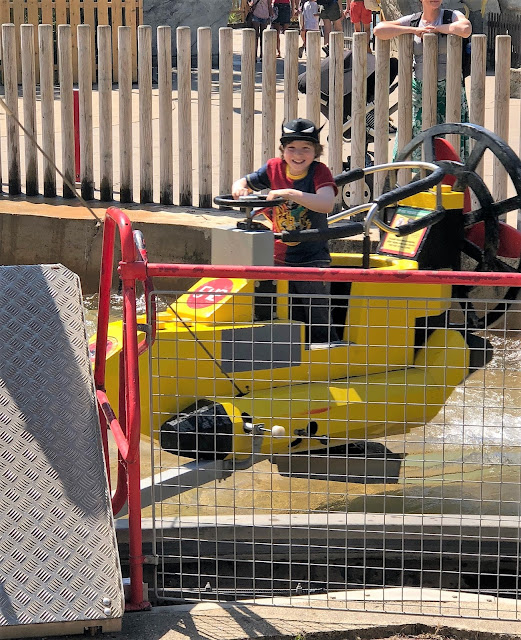 On Tuesday morning we packed our bags for a two nights-stay in Brighton. We booked a family room at Jurys Inn Waterfront hotel. When we arrived, we got the keys to the room which overlooked the back, with a smelly fish shop. Eddie was so disappointed, that we went to the front desk and asked if we could be moved somewhere else. We explained that two years earlier we stayed in a family room on the side, with a partial view of the sea.
They offered us a room with a view at the front, but we'd have to pay more for the pleasure. We agreed. Eddie thought it was the best view in the world. We could see the beach and the Brighton Pier from our window.
Here is Eddie, chillaxing after a walk on the beach, eating breadsticks. 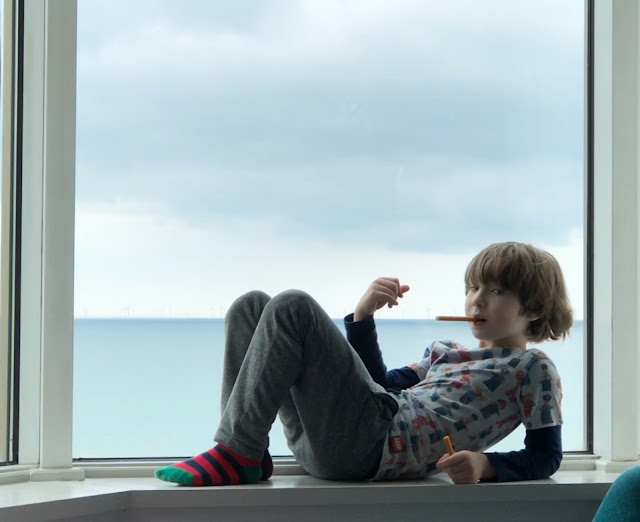 The next day I got a phone call from Sasha's teacher that he was too distressed and they were bringing him back home. They knew we were staying away, so asked when I could possibly be back.
There was not much I could do but grab my bag, and say Good bye to Eddie and Federico who stayed for another day/night. Eddie was pretty upset, as we had big plans for the day, including having fish and chips on the pier and long walks on the beach, and playing in the arcade. Alas, it was not meant to be.
On top of that, while on the train, I got messages and calls from Witney friends that there was a huge fire in our area, and our street was closed, and some of the houses were evacuated. I was worried that we won't be able to stay at home that night, and if Sasha were distressed after his trip, staying another night elsewhere would have been a nightmare.
But the angels were listening and took pity on me. The fire was put out by the time I came home, and when Sasha arrived later, his transport was let through the cordoned area.
When I went out in the garden, there was a muntjac deer, jumping around in panic. I managed to take one shot of it, and it scaled over to the neighbours' garden, first on the compost frame, then over the wall. Don't know how he would manage to get out of there, as their garden is on a much lower level than ours, and is surrounded by high walls on all sides. 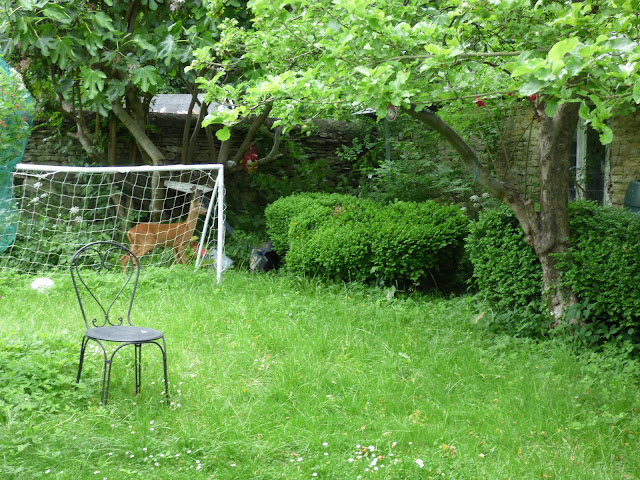 Tomatoes in the greenhouse are just beginning to take shape. These are the yellow plum tomatoes. 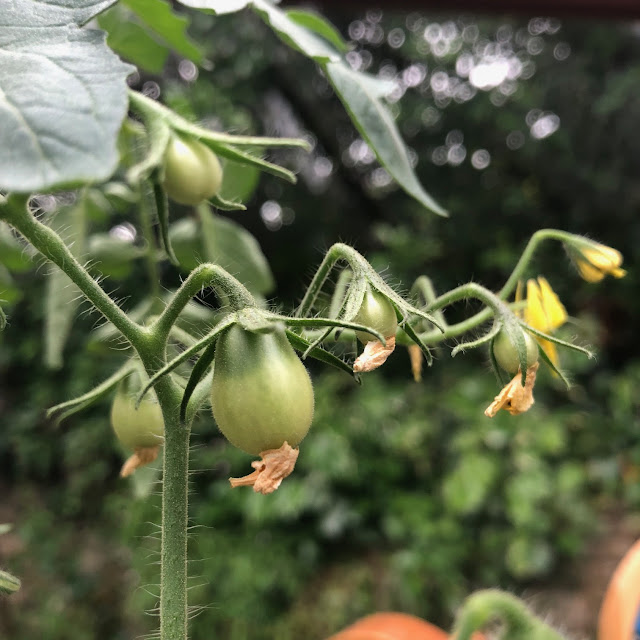 Walking into town, we met this cat. It must be living locally, as we see it often enough.
I liked the silhouette of his head's shadow. Looks totally like a  Batman. So, it must have been a Catman. 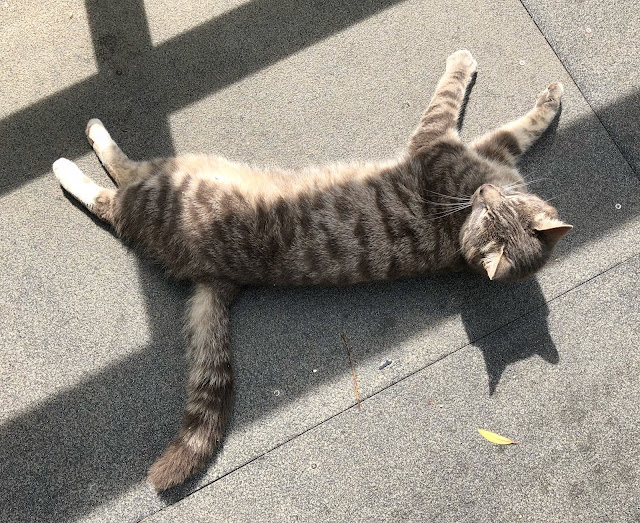 There is a photo booth frame in the Co-Op. I guess there is some comp going on. Of course, Eddie had to poke his head through and giggle. 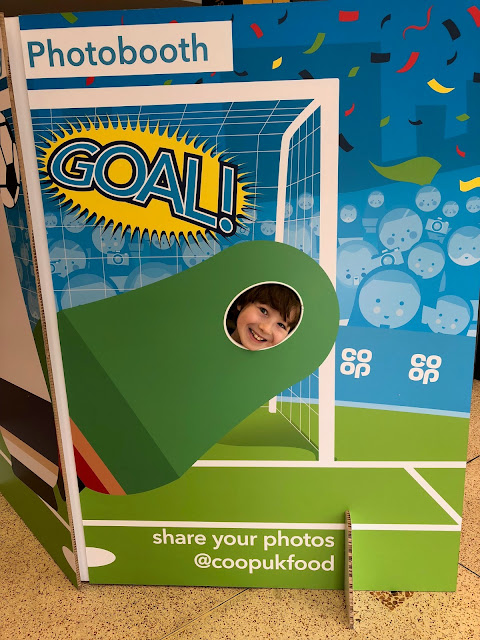