Salad Olivier and the ghosts of the past New Year's eves

When the clock was ticking at a quarter to midnight Russian time (in my home town), I called my brother on Skype to have a little chat, wish them a happy new year and also listen to the sound of the Kremlin clock. It was lovely to have all my favourite people "around", my own guys here, and my Mum and brother's family in Russia. I raised a glass of champagne and cheered to the Bomm-Bomm sound of the Kremlin clock. This sound brings back so many memories of my childhood, when we would watch the TV until the early hours.

Somehow we never celebrated the new year with the same abandon and passion here in the UK, as I did in Russia, well, maybe apart from the very crazy new year's eve in Rome, but that's another story.
I asked my brother what they had for dinner, and he mentioned that among many other dishes they had a salad Olivier, which was prepared by my 11-year-old niece Sasha.

That was it. I got very nostalgic, and after we finished the Skype jolliness, I went to the kitchen to check if I had the right ingredients for the Salad Olivier (pronouned Olive-yeh). It is one of the famous troika of salads which are served on the New Year's eve. In fact it would be hard to imagine any New Year's eve's table without this salad which would be served throughout the what used to be the Soviet Union. As it happened, I had all the necessary ingredients, and so my New Year's eve happened to recreate my childhood memories. 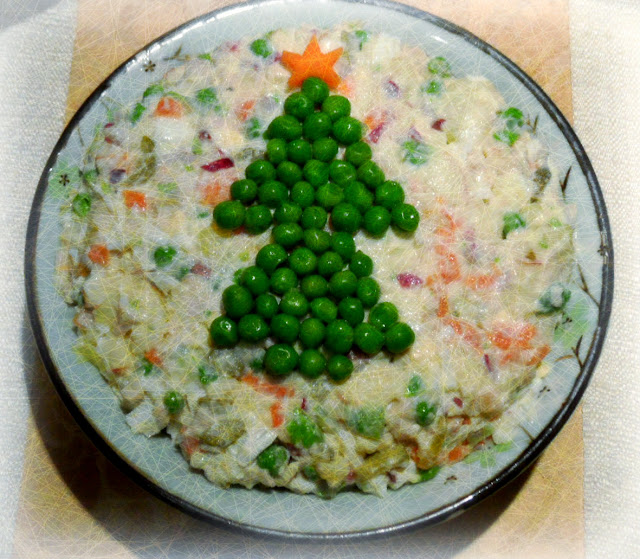 If you decide to find the original recipe online, you will be at a loss, as there are so many variations of the famous salad. Just don't follow the recipe for Salad Olivier in the book "The illustrated food and cooking of Poland, Russia and Eastern Europe" (ed. Lesley Chamberlain). The recipe in the book has nothing to do with what the salad looks or tastes like.

The recipe is attributed to the French (some argue that he was Belgian) chef Olivier who opened a restaurant in Moscow in the 1880s. The original recipe asks for the partridge meat to be used in the salad.
My version is closer to the Soviet-style recipe. I have a couple of the Russian cook books published in the 1950s, and had a look at their list of ingredients. It wasn't very helpful, as the amounts they list would cater for a big crowd. In fact I do remember the old days when we would go to out friends' party, and the women would be sitting in the kitchen, chopping the ingredients and mixing the salad in the big enamelled wash-basin. 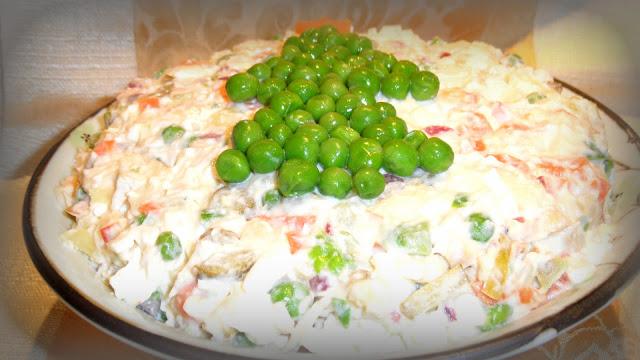 First cook the potatoes and the carrot in the salted water. Cook the eggs. Chop the onion finely and add to a big mixing bowl. Chop the carrot finely and cube the potatoes (they should be cold, do not add any warm ingredients to the salad). Add to the bowl with the chopped eggs, apple, cornichons (or gherkins), olives and two thirds of the peas.
If you are using the turkey, chop it into small pieces. For the authentic Soviet-style recipe use ham rather than the turkey or partridge. I know some people used to add chopped boiled beef instead, but I don't think the beef works very well in this salad.
Add the chopped meat to the bowl, add all the mayonnaise (the Russian mayo we used in the past was of a runny variety, and actually tasted much nicer than any of the Hellmann's products).
Mix the salad really well.
Spoon the salad in a big bowl. Decorate with a Christmas (new year's) tree made of peas. Or make the clock with the olives and carrot sticks. 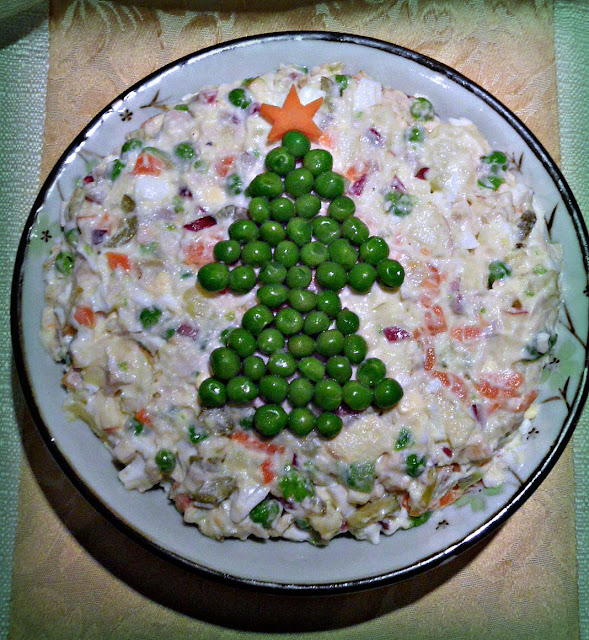