I volunteered to do a review of the book, so the fault is entirely mine.
This book is a mix of genres: it is basically the epistolary genre bordering on chick-lit. 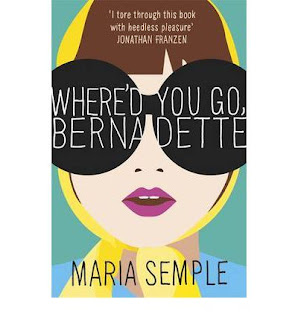 The book starts with the chatty buddy-matey email banter between the Orion editors. A big mistake. I do sincerely hope this is not a new trend started by the publishers to print their email correspondence. It feels insincere and faked. Of course, you cannot expect the publishers saying about their own book: "It is so boring, I fell asleep on page 3". Please ditch this irritating approach for the future reference.
If you browse through the inane emails bounced from one editor to the other, you'd think there has never been a wittier novel. Someone was laughing so hard, they bumped into the old lady on the way. Really? Could you please point to that particular passage that caused so much merriment.
The book endorsements promise a lot. I had to re-read them after I finished the novel, and asked myself: Have we been reading the same book?

The plotline:
Take a dysfunctional family. A has-been architect Bernadette Fox who won awards for her design projects. She moved to Seattle with her husband and became an eccentric recluse and a social disaster. If your child has health problems (her daughter Bee was born prematurely and spent the first five years of her life in the hospitals), you learn to ignore the minor irritants of life and don't care for the petty things like Intersections. But not in case of Bernadette. I think that was one of the reasons I could not believe the author. Having a child with special needs or big health problems teaches you what really matters in life. You just don't get obsessed with the parking. For example, she describes parking in Seattle in 8 step process, ending with an insight "Already I wished a Chechnyan rebel would shoot me in the back". Really? Is that supposed to be funny?
Then there is Bernadette's husband Elgin who works for the Microsoft. I know he was supposed to be portrayed as boring, but every time Semple was describing the MS empire, my eyes were glazing over. Excruciatingly tedious.
And of course, there is a child prodigy Bee. Bee comes up with an idea of taking her parents on a trip to the Antarctica. Her mother disppears, and for the rest of the book, poor child is looking for her mother. You'll have to read the book yourselves to find out how it ends.
Alas, I didn't care to find out what happened to Bernadette (good riddance to her), neither did I care for her abandoned child.
But as I promised to do a review, I kept reading (and cursing myself for agreeing to do it). Once I finished the novel, I sighed with relief. Finally over.
The novel is supposed to be a satire on the modern society. Everyone in the novel is talking (or writing, to be more precise) in the lingo and manner of the sitcom characters, i.e. in those one-liners that are meant to be witty, but in real life are rather flat, forced and annoying. The supercilious emails by Bernadette to her Indian assistant Manjula are cringeworthy and patronising. She is the most annoying character in the book.
There is of course a villain, a caricature PTA mother Audrey, in the style of the Desperate Housewives' PTA chairwoman Dana-Paina. She is one of the so called Gnats (i.e. other parents as opposed to Bernadette).

I'm not going to push you in any direction. You might even like it. There is a demand for every kind of literature (there is even a market for memoirs of Jeremy Clarkson and Katie Price).
Sadly, this novel didn't live up to its hype.