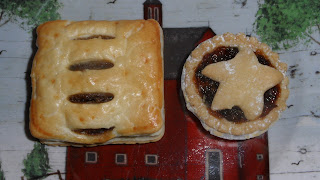 When Heston Blumenthal's take on mince pies hit the shelves in Waitrose last year, the brouhaha followed their appearance. The year before his orange pudding with a whole orange inside was so popular that it was sold on ebay for crazy money (and presumably bought by people with more money than sense). I didn't fancy a pudding, so stayed away from it. I guess I never acquired a taste for this British delicacy. The only way I can eat the pudding is with lots of good quality ice cream.

I first encountered The Authentic Bread Company when they sent a small cute box with a mince pie enclosed with the Abel&Cole veg box. It was so delicious, I ordered two boxes of mince pies for our Christmas. As you can see from the photos below, mini mince pies are an absolute delight to look at. They are very tasty, with a perfect ratio of the light crumbly buttery shortcrust pastry to the mincemeat, and they are organic, which is an added bonus. 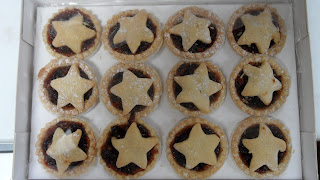 Alas, these melt-in-the-mouth little beauties are only avaiable at Christmas time. 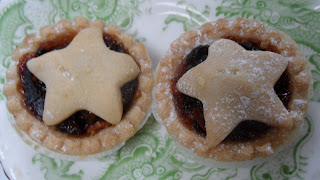 Heston's mince pies with a twist boasted an unusual combination of the lemon curd, apple puree and rose water with the currants and raisins in the pie. But the most exciting bit was the smell of the Christmas tree, in the form of pine oil, in the sugar on top.
"Warm in the oven and then sprinkle with pine sugar for a real festive twist," say the instructions on the box. When I tried to explain to my Mum the concept in our phone conversation, she was left unconvinced and puzzled, as to why would I want my food to smell like a Christmas tree. It's the bears who eat the pine cones and pine needles before they hibernate. Good point, Mum, but I was still intrigued by the idea of a lovely smell coming from my mince pies, and bought a box of Heston's experimental delights to try. 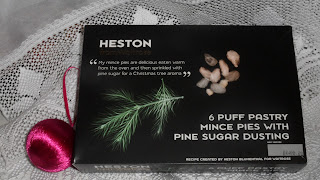 The smell of the pine sugar on the hot pastry is truly inspired. As soon as the fine sugar hits the hot surface, the kitchen fills with a wonderful aroma. I loved it, such a fab idea. But the smell fades away almost immediately. The pastry itself is crumbly and flaky, very light. The mincemeat is not overpowering. But is it a mince pie? Not sure if it should have been named as such. 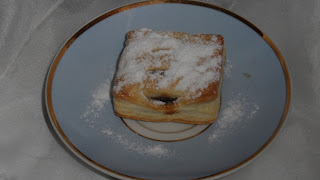 To be fair, these two different mince pie varieties should be judged in two categories. The Authentic Bread Company mini mince pies would win a golden branch as the classic traditional mince pies.
Heston definitely gets my vote for the originality and inspiration.

I was rooting for The Authentic Bread Company, my husband loved Heston's creations. Eddie the human hoover ate both with gusto, Sasha did not eat any.
Come Christmas'12 I will be buying both varieties again.
How many days are left until the next Christmas?
Posted by Galina Varese at 16:23:00