The Scent of Death by Andrew Taylor

I confess I am addicted to reading historical thrillers. It is a pure escapism for me. There's nothing better after a long difficult day than to snuggle in bed with a book and get engrossed in the murder mystery set in the times long past. Having thoroughly enjoyed The American Boy by Andrew Taylor, I was excited to get hold of Taylor's latest novel The Scent of Death. 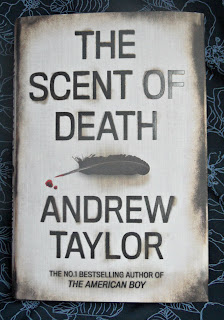 If you are a fan of the historical thriller genre, you might have come across some pretty mediocre examples of it, where the plot often does not hold water and the characters seem to be totally implausible.

Andrew Taylor has created a gripping detective story, with a convincing plot and compelling characters.
Taylor has chosen a fascinating period of history: the novel is set during the American War of Independence.
The pace is teasingly slow at the start, the style of writing is exceptionally good.
You get the taste of how good the writing is from the very first lines:
"This is the story of a woman and a city. I saw the city first, shimmering from afar like the new Jerusalem in the setting sun. I smelled the sweetness of the land and sensed the nearness of green, growing things after the weeks on the barren ocean... It was Sunday, 2nd August 1778"

The story is narrated by Edward Savill, a London clerk from the American Department. He is assigned to New York to investigate the claims of dispossessed loyalists who are evicted from their lands by the republican rebels. You get the insights into the routine horros of the civil war, injustice, internal contradictions, tough conditions and precariousness of life.
Savill is billetted with the respected Wintour family. The enigmatic Arabella Wintour is the heroine who appears in the first sentence of the book and who would propel the story to its unforgettable end.
Savill is a sympathetic and observant story-teller.

The narrative is visually dramatic and marvellously atmospheric, the darkness hiding the danger and proving treacherous, the light - be it shimmering candles or glowing windows - highlighting the facial features and revealing the mysteries. Flashes of light and darkness are symbols of the human nature, as almost each character in the book has a secret they want to hide.

The title of the novel is quite apt, as the scent of death follows you from the beginning, with the memorable description of the "merman" in the sea, the graphic scene of execution, with more deaths to follow, coming to a very poignant attempt of escape of the ice and the most intense and agonizing dénouement.

P.S. Harper Collins kindly sent me a copy of the book for reviewing. All opinions are mine.
Posted by Galina Varese at 12:35:00